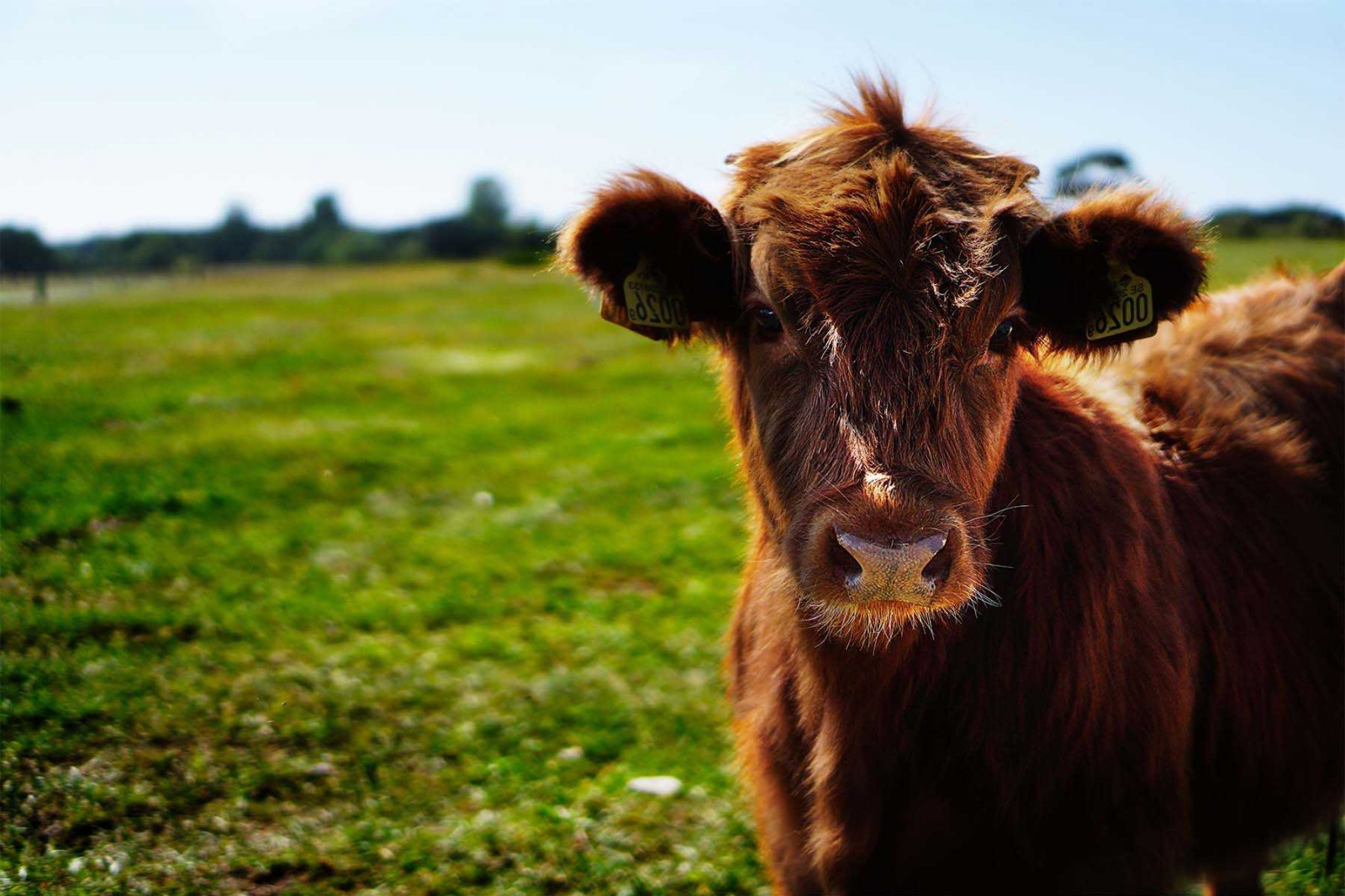 As the streaming wars continues in full swing across the world, Show Tracker reveals that in the US branding content as Digital Originals is more important for SVODs than ever, even when those TV shows are acquired from third parties. What started as a quick means of enhancing launch line ups has continued for a number of services, with SVODs like AMC+ and HBO Max either acquiring or co-producing more UK shows than both Amazon and Netflix. 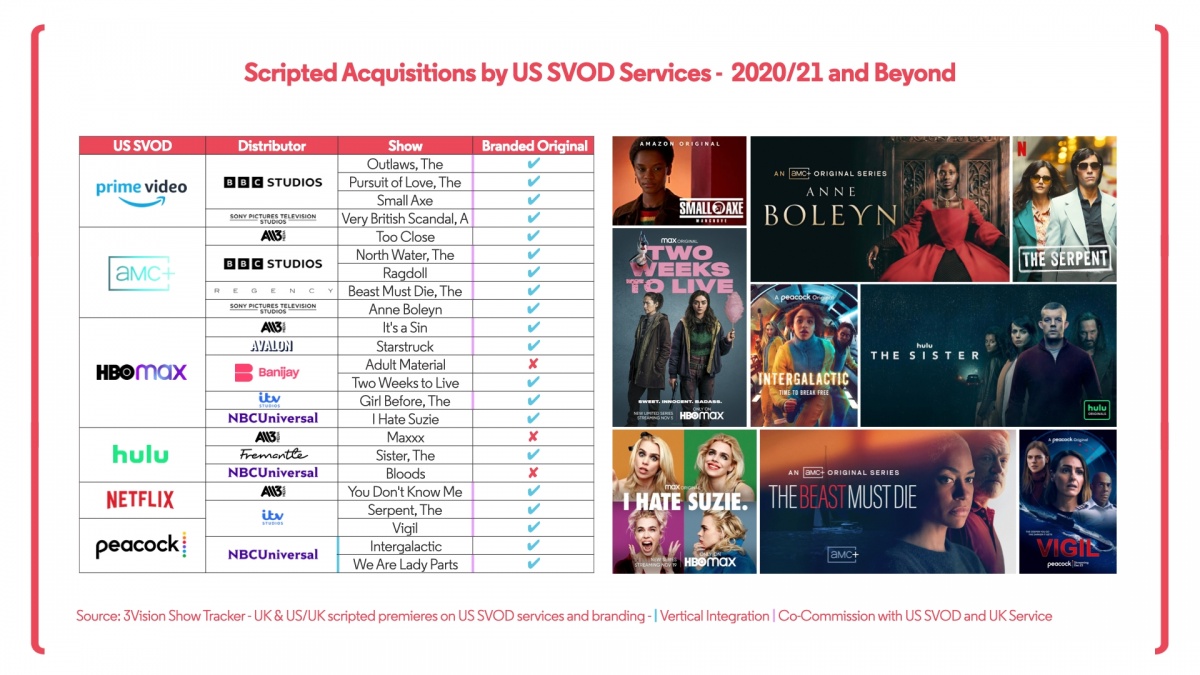 87% of acquisitions and co-commissions airing in the US in the 2020/21 season or later on SVOD were branded as Originals, with the moniker now serving as means to push the perception of an ever increasing pipeline of brand new, exclusive premium content to potential subscribers as well as existing ones at risk of churning. Not all SVODs in the US are engaging in this strategy however. 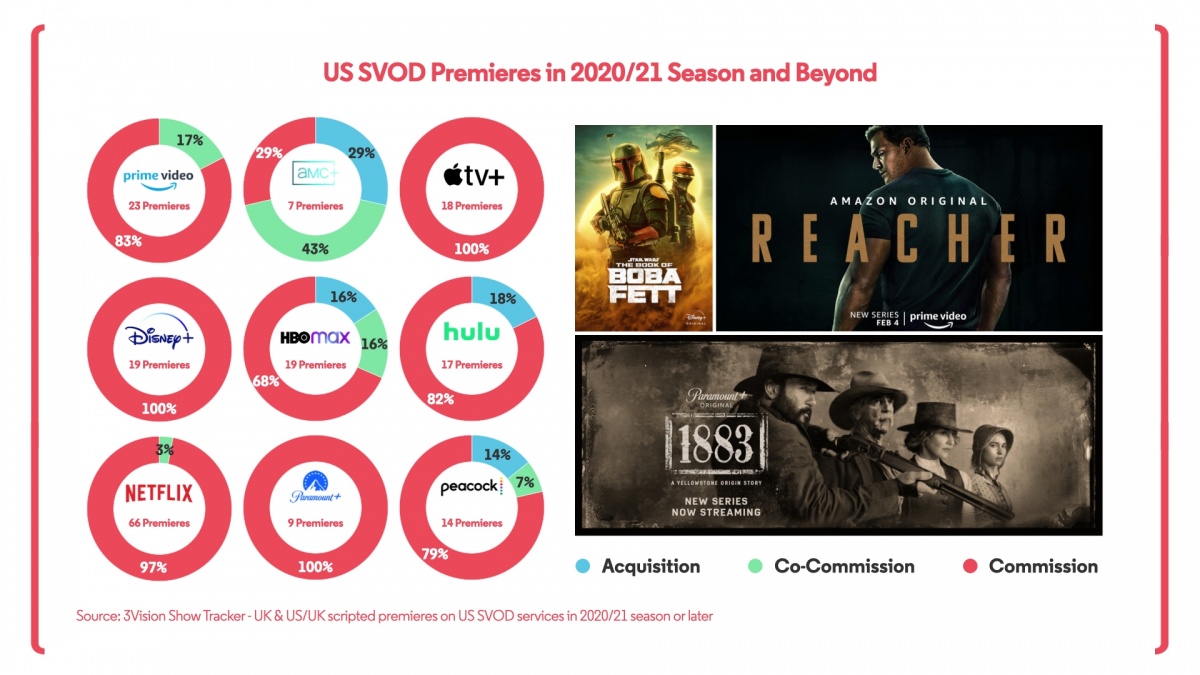 While Hulu has acquired and co-produced some titles for the platform, its sister service Disney+ in the US has so far only debuted commissioned digital originals for the service. Internationally Disney+ has quickly become the home for all Disney distributed content. Paramount+ and Apple TV+ are also following a similar suit, but the latter has acquired Israeli commissioned shows from Cineflix in the past on the worldwide stage.

Netflix continues to acquire less TV shows than ever, with just two shows reaching the US as co-commissions as the service concentrates instead on bolstering its internal digital original catalogue. The long held lead from Netflix in original production is starting to slip however, as commissions from studio owned SVODs took over Netflix’s original output for the first time in the 2021 fall season.

The digital original slate from AMC+ has the highest proportion of UK acquisitions, with AMC+ Originals existing as exclusive titles for those who sign up to the service which in turn bundles AMC, BBC America, Sundance Now and Shudder all under one subscription.

Outside the US however branding doesn’t seem to be as high a priority for SVODs acquiring content, with only 47% of acquired TV shows being branded as digital originals by SVODs. 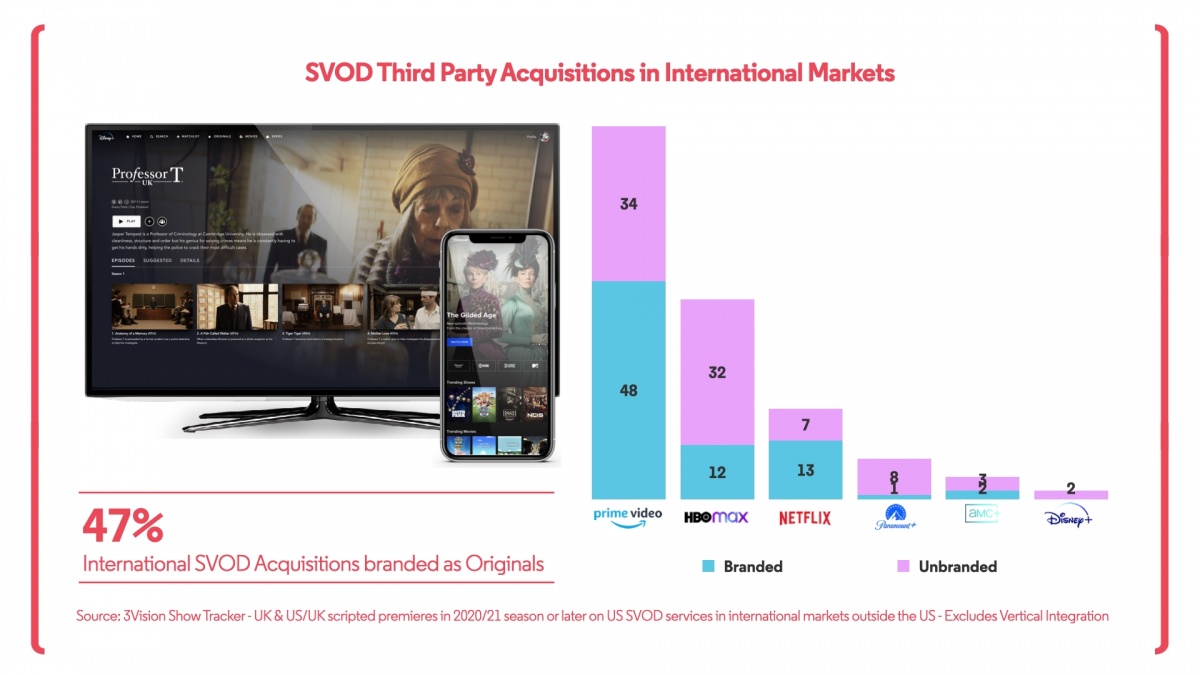 Most TV series premiered by Amazon Prime or Netflix in multi-market acquisitions are branded as Originals or Exclusives with local deals on a per market basis more likely to debut unbranded on the SVOD services. Other Studio SVODs engaging in less third party acquisitions in the US are open to it elsewhere, with both Paramount+ and Disney+ premiering a limited number of acquisitions, the latter premiering ‘Professor T’ (BetaFilm Group) in The Netherlands and ‘Too Close’ (All3Media) in France on Disney+.

HBO Max and Paramount+ have both had to essentially re-acquire some of their own Originals in the US for other markets due to third party distributors being attached. In some cases these third party distributors are selling to competitor services in these markets. ’Love Life’, one of HBO Max’s most early releases in the US is distributed by Lionsgate and was sold in its first window in Sweden to C More almost a year ahead of its arrival on HBO Max in the market. Meanwhile the Paramount+ Original ‘Coyote’ went to Viaplay in the Nordics due to its distributor Sony’s longstanding volume deal with NENT and has yet to appear on Paramount+ in a second window, although this may change when the service is shut down for the launch of SkyShowtime in the region.

The US focus on branding all new TV shows coming to SVOD platforms as originals may help domestically boost the perception of their output but might also pose a problem as these services rollout globally and international subscribers expect to see high quality UK shows, some of which have received high profile exposure at The Emmys. Distributors of UK TV shows selling to Studio SVODs in the US may find that very same studio returning to them in the future for more territories if its a big enough hit that an expectation grows that it should be an original in International markets too.

Show Tracker is an essential tool for the TV industry, which monitors where TV shows are being sold around the world and the rights attached to each deal. Tracking over 1,300 TV shows and 350 different services in 19 markets, it provides a unified view of the distribution market. Show Tracker gives you data you can trust to drive your strategy forward and give you the edge in negotiations.