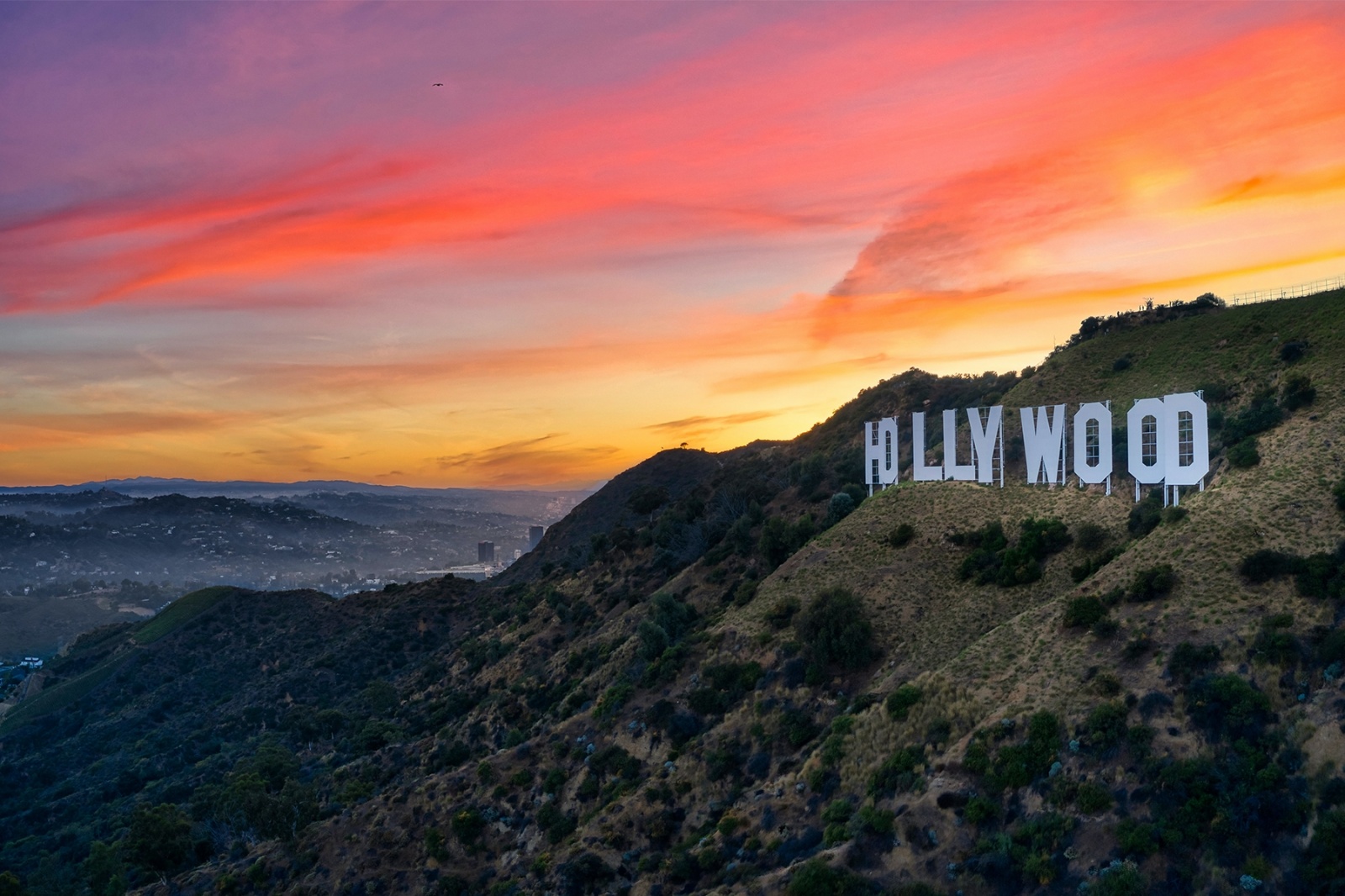 Most TV shows that won Emmy nominations this year are either Digital Originals or from studios likely to license them to their own services, rather than make them available to third party buyers, further increasing the challenge for international services looking to air premium content.

Show Tracker reveals the distributors of scripted TV shows that received the most major nominations and wins in the 73rd Primetime Emmy Awards. WarnerMedia comes out on top in line with their services, HBO and HBO Max, which received more nominations than any other commissioning service. But it is ‘Ted Lasso’ that really puts them ahead when it comes to actual awards, with the show achieving 7 Emmys on the night. 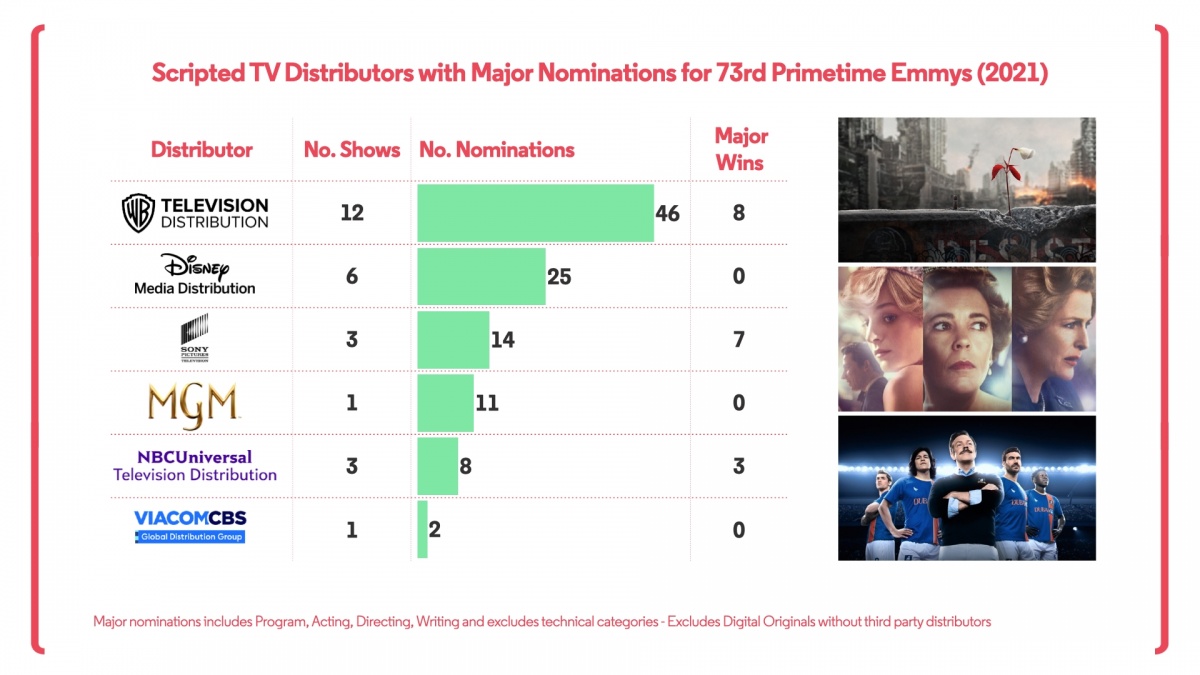 While ‘Ted Lasso’ is an Apple TV+ Original the distribution rights lie with WarnerMedia, setting up the studio with a high calibre show that may see some attraction in the second window from buyers, or find a belated place on its own platforms. While buyers are reluctant to take second windows after SVOD, Apple TV+ doesn’t have as much prominence as Netflix or Amazon in the market so the show could definitely reach a sizeable audience in the second window. The most important consideration holding back services buying in the second window after SVOD is the limited catch-up rights on offer for shows first appearing on Netflix and Amazon. This is not the case for all SVOD however - Lionsgate’s SVOD StarzPlay has allowed many titles to be stacked and even boxsetted after first appearing on their service, including some of their own TV shows distributed by Lionsgate.

Disney+ Originals account for over 50% of Disney’s nominations, with the studios first of their new Marvel TV series, ‘WandaVision’ receiving eight major nominations alone. Three of their TV shows were nominated for ‘Outstanding Drama Series’ this year, more than any other distributor. While ultimately they all lost out to The Crown, it still shows the type of content Disney is pushing out to its services. Even though no Disney title received a major award for writing, directing, cast or series, in other technical categories such as costume, music and stunts they picked up several awards, with ‘WandaVision’ winning three and ‘The Mandalorian’ winning seven. 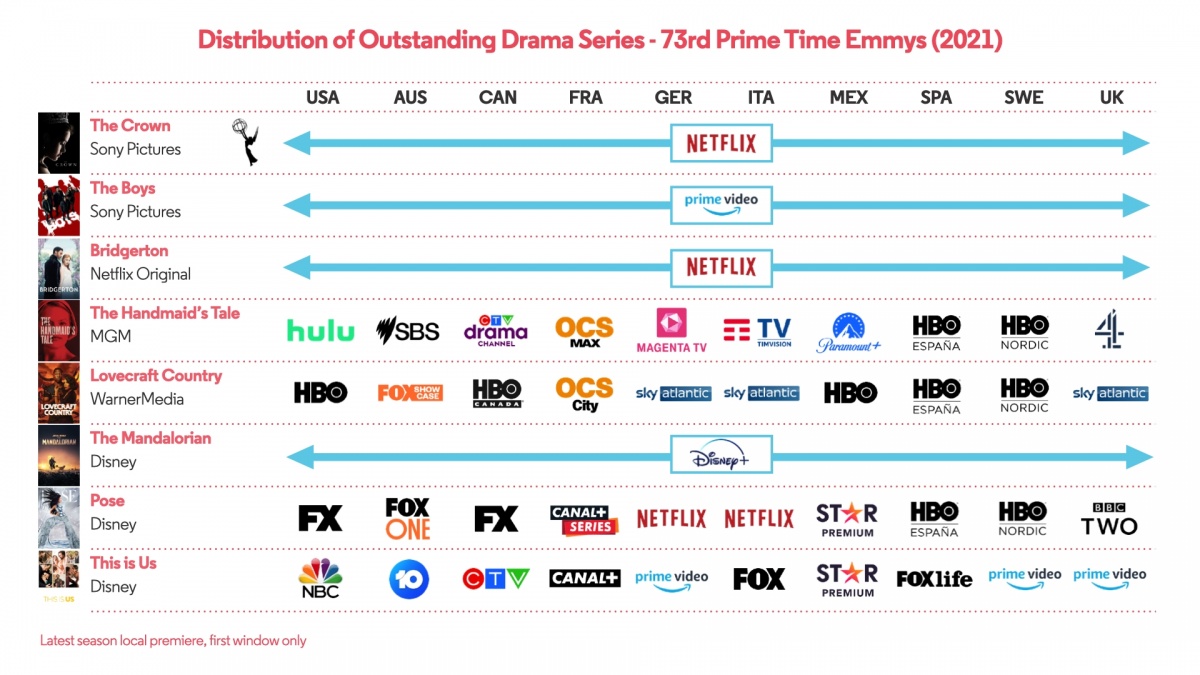 Netflix and Amazon continue to succeed at The Emmys with a number of shows receiving nominations and awards. However, like ‘Ted Lasso’ for Apple TV+ a number of these TV shows have their international rights held by third party distributors. Both ‘The Crown’ from Netflix and ‘The Boys’ from Amazon are distributed by Sony Pictures, the latter having recently been sold by the studio to IQIYI in China. All 14 of Sony’s major nominations have come from TV shows that are Netflix or Amazon originals so while the studio is in a position to supply individual services on a local level, its most lauded shows of late, such as big Drama winner of the night ‘The Crown’, are instead tied up with Global SVOD services, making them less attractive to third party buyers.

MGM as a studio received the most major nominations on a per show basis by virtue of it having only one show, ‘The Handmaid’s Tale’, in the running with the most major nominations after ‘Ted Lasso’, even it did not ultimately win any awards this year. Acquiring award winning content for a service is difficult when studios like Disney and WarnerMedia are either licensing shows to their own services or selling them in bulk in volume deals, such as how WarnerMedia has historically done this with its many homes of HBO. Historically however MGM has been a notable exception to this with premium dramas such as ‘The Handmaid’s Tale’ being made available to a wide variety of third party services internationally. However its recent acquisition by Amazon is likely to disrupt this, making the search for award winning content even harder for buyers. 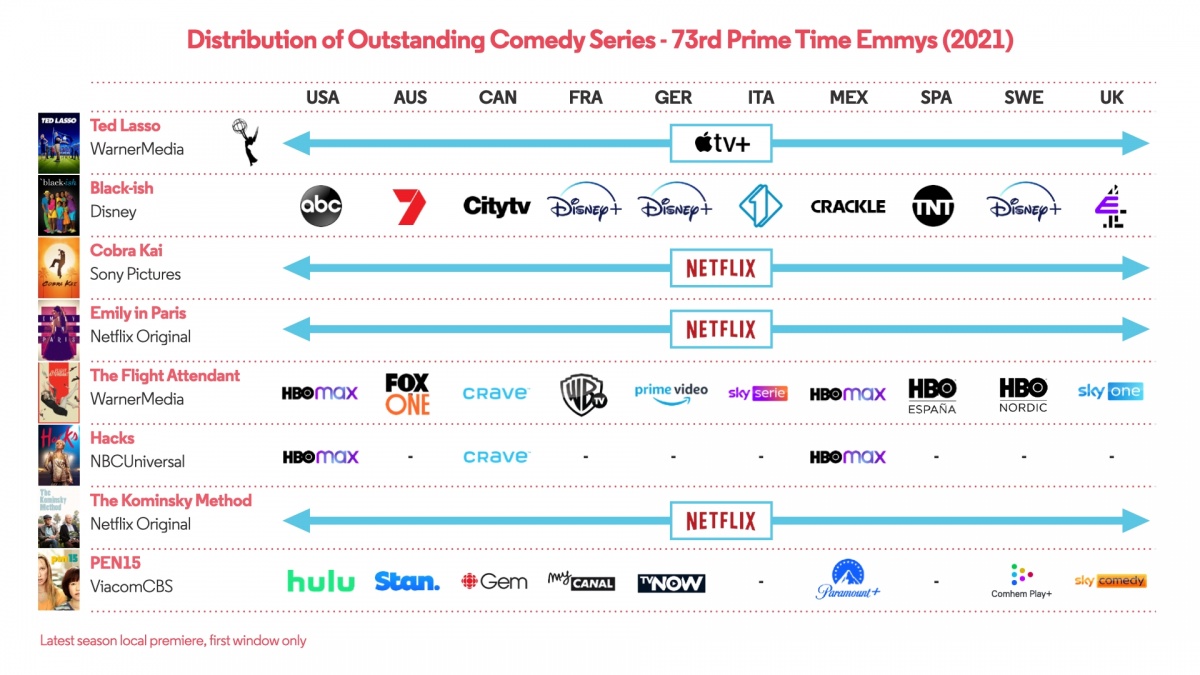 HBO Max commissioned TV shows account for 11 major nominations, six of these come from ‘Hacks’, of which it won three. Despite being commissioned by the SVOD, it is distributed internationally by NBCUniversal. While so far it has reached HBO services in Latin America, allowing other studios to hold third party distribution rights over commissioned services can threaten HBO Max’s content parity internationally when it does start launching in more territories. Other HBO Max commissioned shows with third party distributors include ‘Love Life’ (Lionsgate) and ‘Made for Love’ (ViacomCBS). This domestic focus extends to HBO Max’s acquisitions, ‘Two Weeks to Live’ was acquired by the service from Banijay and branded a Max Original. Elsewhere however Banijay has sold it to Paramount+ where it has been locally branded as a Paramount+ Original.

ViacomCBS only has two major nominations despite its sizeable content portfolio, both for ‘PEN15’ which originally debuted on Hulu in 2019, neither of which resulted in a win. They again for now represent another distributor selling to third parties, only licensing to Paramount+ in the first window in Latin America where the show had remained unsold until the SVOD’s launch. With Paramount+ expanding at a slower rate than studio rivals Disney and WarnerMedia’s Direct-to-Consumer activity, ViacomCBS can take advantage of their strengthened position as one of the few studios willing to sell US content to third parties in many international markets.

While international services may despair at the lack of award winning TV shows that are available for acquisition there are a few, albeit more hidden, opportunities out there. With HBO Max continuing its domestic focus, allowing many of its commissions to be distributed by third parties for now, this opens up the opportunity to acquire these shows from their respective distributors. Co-Productions are another route to bring high end drama to your service. ‘I May Destroy You’, which received six major nominations and two awards and is distributed by WarnerMedia, was co-produced for HBO and BBC One in the UK, ensuring its first window premiere on the public broadcaster despite WarnerMedia’s existing volume deal with Sky in the market.

Studio SVOD commissions are taking an even larger share of the nominations and wins this year, as they continue to dominate the international premieres in the TV industry for the time being as well. With most of the markets they operate in however requiring them to produce local content according to strict quotas such as that from the EU, they may look to engage with local services on co-productions in the future to help achieve this. A strategy that definitely has the potential to bring about more award winning TV shows.