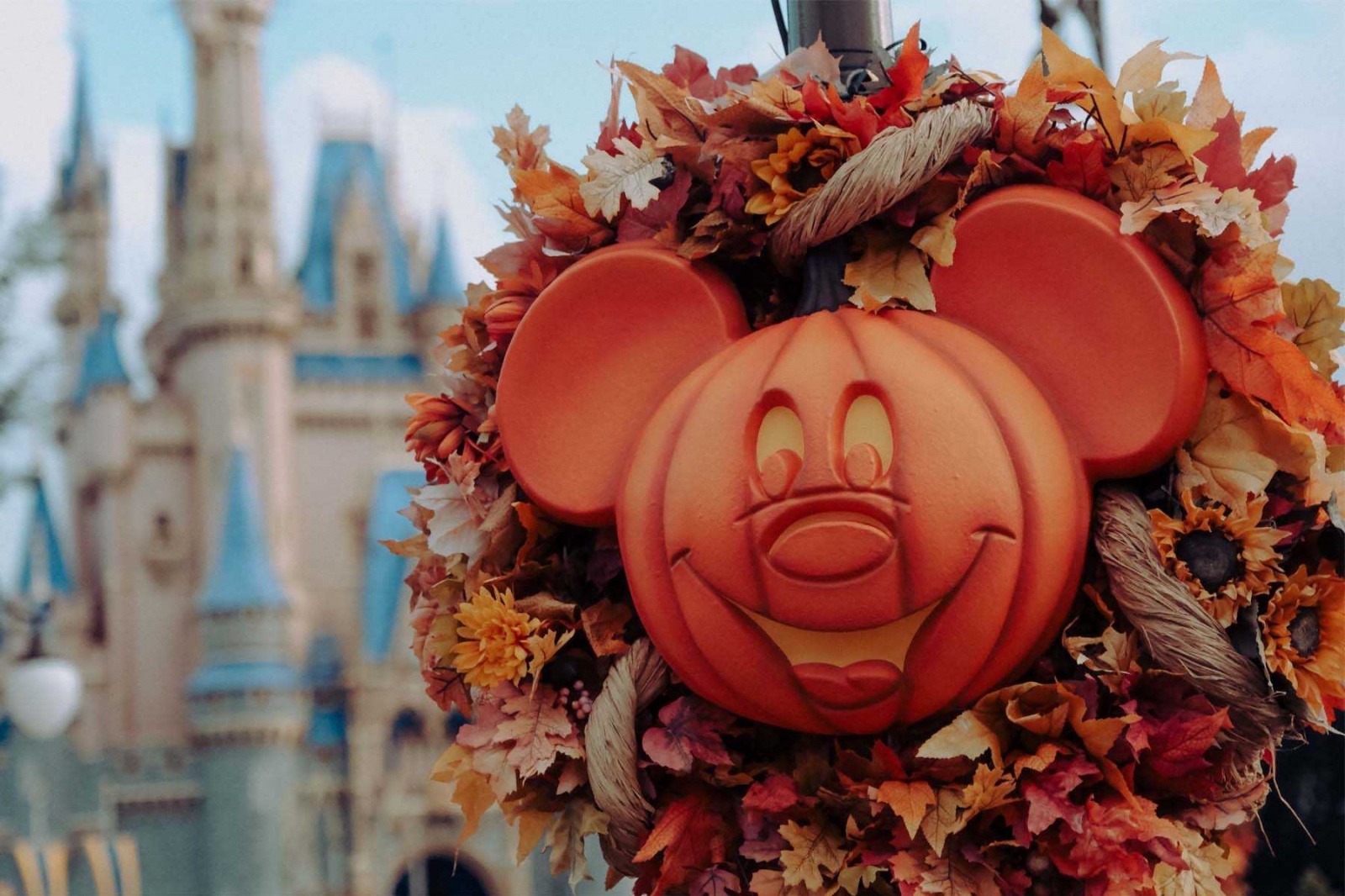 While the initial launch of Disney+ had a minimal effect on Disney’s existing levels of vertical integration in Europe, Show Tracker reveals the enhancement of Star has unlocked Disney’s ability to flood the SVOD with its own TV series 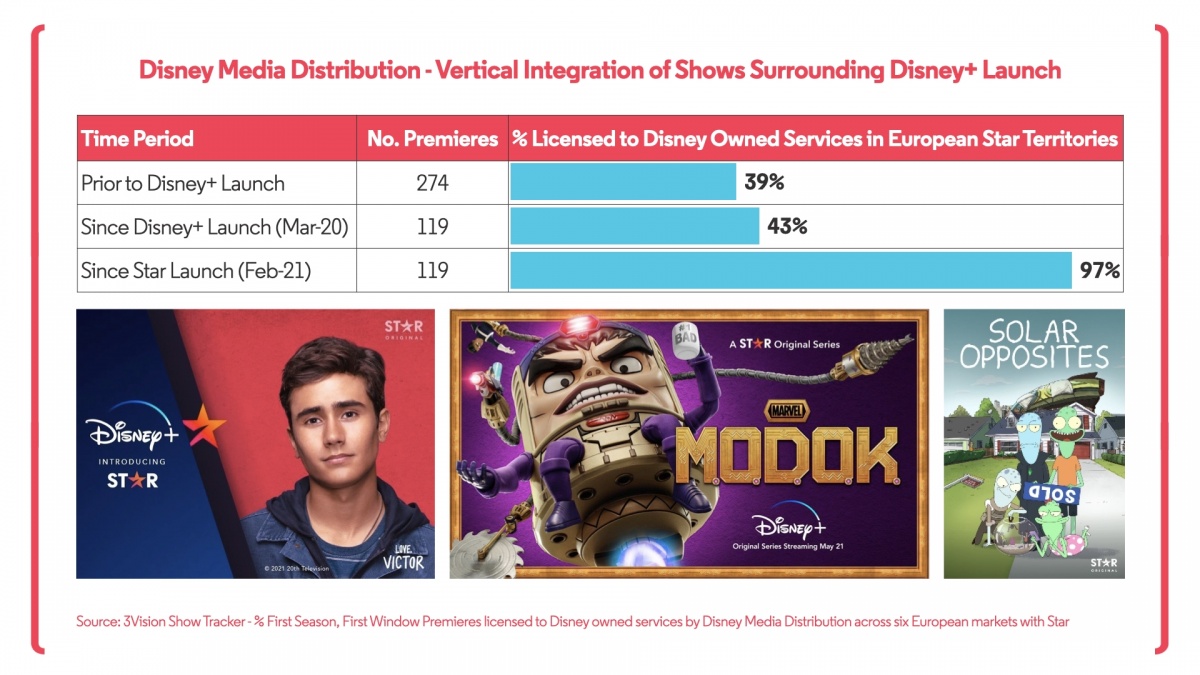 The above graphic shows that following the addition of Star, Disney’s levels of vertical integration in Europe for first season, the level of vertical integration in Disney distributed first window premieres shot up to almost 100% . The SVOD’s initial launch was limited by only premiering content from the five main brand pillars (Disney, Star Wars, Marvel, Pixar, Nat Geo) so did not provide a huge boost to its base level of 39% which largely came from its existing Fox channel presence.

Virtually all the TV shows from Disney’s recent catalogue have since come to Disney+ in any territory with Star - in the second or sometimes third window - but in some markets where titles had yet to be sold Disney+ served as their first window debut.

Looking at the latest first window sales activity of TV shows from the current 2020/21 season demonstrates how much starker this pivot to vertical integration has been, helping to drive a massive increase in vertical integration in Europe for this season compared to the last. 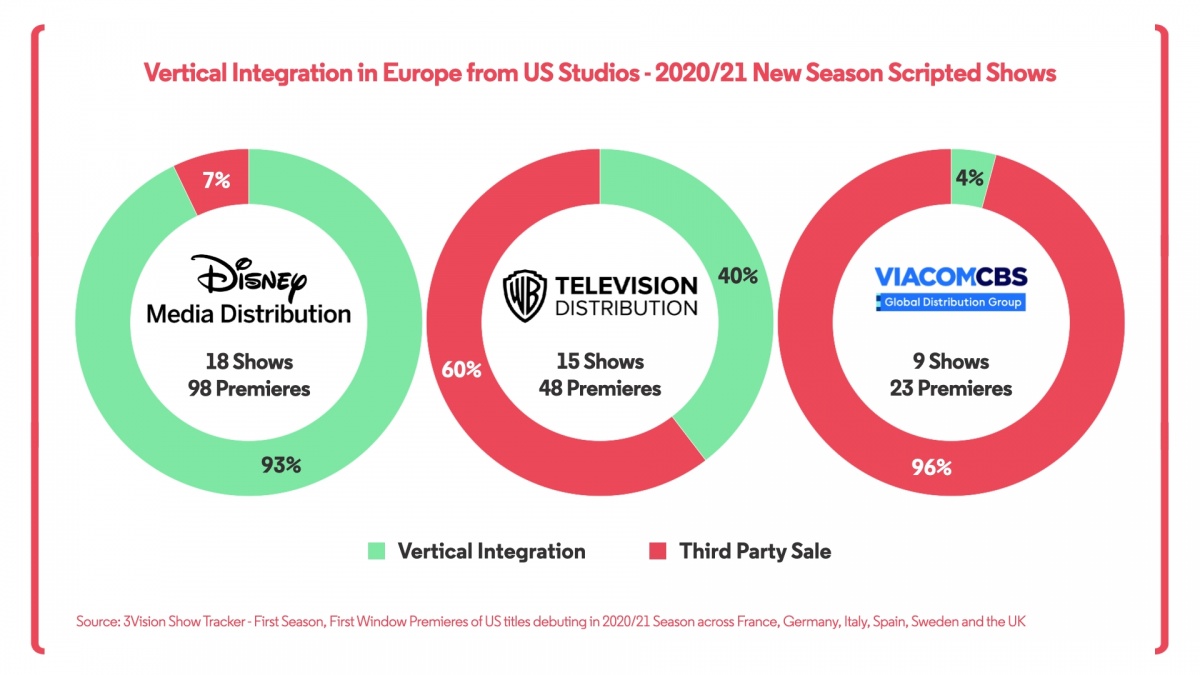 WarnerMedia historically had the highest levels of vertical integration, supported in large part by their SVOD initiatives in Spain and the Nordics which have been licensing virtually everything the studio distributes for several years. International expansion of HBO Max has been delayed by many long established volume deals with buyers across markets for them to be the homes of HBO. As Disney has undergone a rapid expansion across most major markets in less than two years, the introduction of Star gave one giant boost to its vertical integration levels, taking it well past WarnerMedia.

ViacomCBS meanwhile has limited levels of vertical integration this season in Europe - Its SVOD Paramount+ is so far only in Sweden, with vertical integration limited for the moment even on that, but is set to be replaced with SkyShowtime when that launches in multiple European markets next year.

While the distribution perspective of Disney paints a picture of near ubiquitous levels of vertical integration, viewing the service Disney+ itself reveals some engagement with third parties. Its Originals slate is largely distributed by Disney with the notable exception of ‘The Right Stuff’, instead distributed by WarnerMedia. This will likely be an isolated incident for a first window Original, as Disney+ has since cancelled the show, leaving Warner to try and shop any potential follow up to the series to alternative services.

As a home for content in second or third windows Disney+ is starting to show more engagement with third party distributors. Specifically in the UK it has acquired three prominent UK TV shows in a third window after their initial debut on broadcast and subsequent second window on BritBox. 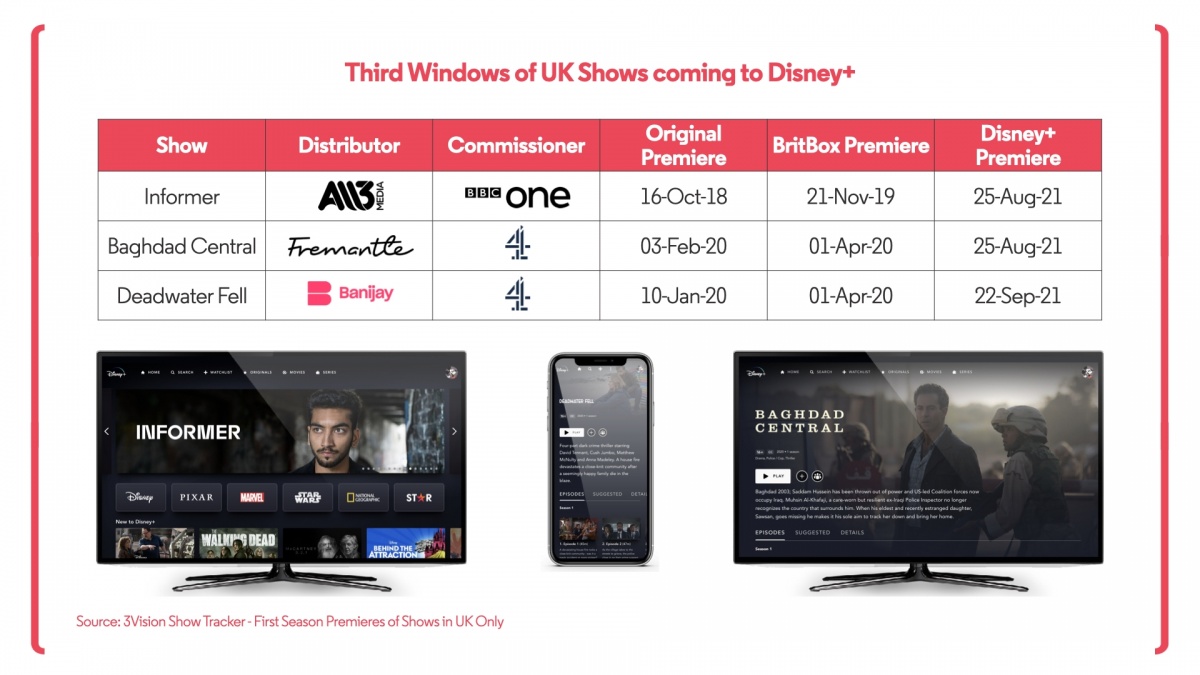 International SVOD services are under local market pressure to include local content on their platforms and while Netflix and Amazon choose to produce more foreign shows than English language ones to address this, Disney+ is at least for now focusing on quick, cheaper wins by acquiring quality UK content in a less expensive window. These specific acquisitions are largely limited to its UK service at this time, with hope that these might contribute to EU set quotas for local content under threat.

The newfound challenge for Disney Media Distribution is to continue to sell TV content that is already on Disney+ to buyers in second or co-exclusive windows. In some cases they have begun to achieve this already. In Germany season 4 of ‘Station 19’ debuted on Disney+ at the same time it began airing on ProSieben, the local broadcaster that acquired its previous three seasons in the first window. While the broadcaster catch-up for season 4 is limited to 14 days, all four seasons are available to both Disney+ and Joyn Plus subscribers. 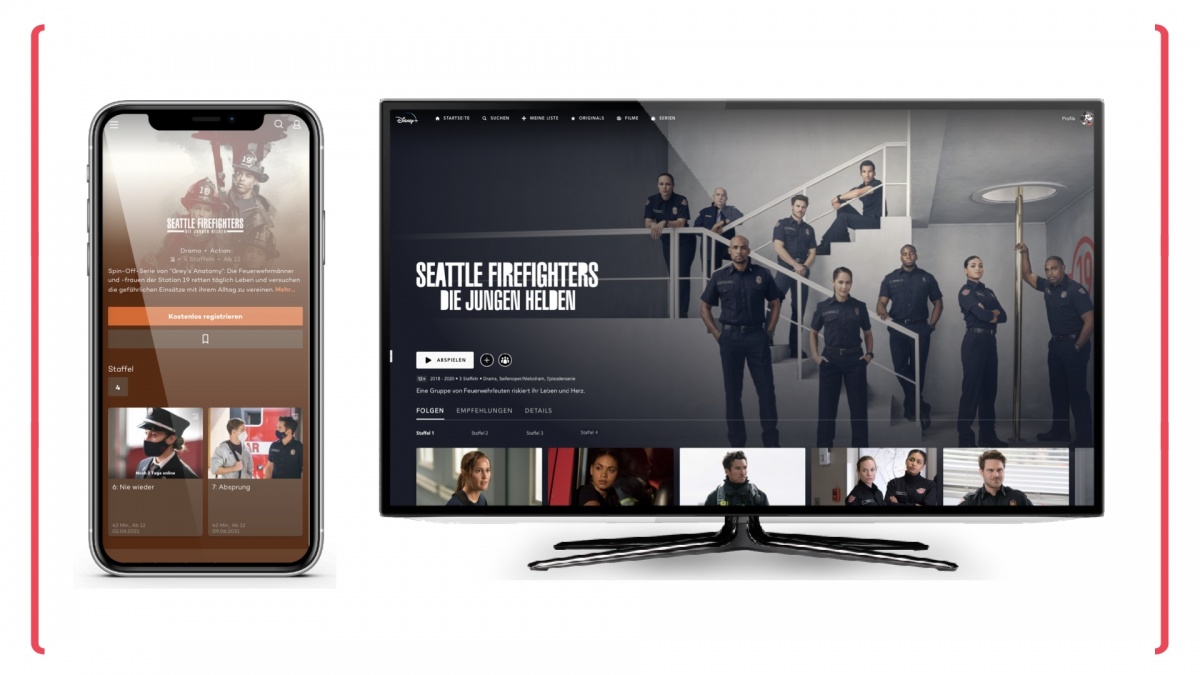 Disney, or any other studio with a direct-to-consumer service, may look to services who have acquired content in the second window after global SVOD such as Amazon or Netflix in the past. While few services have acquired more than two TV shows that first aired on SVOD, there are some notable buyers that have done this multiple times. 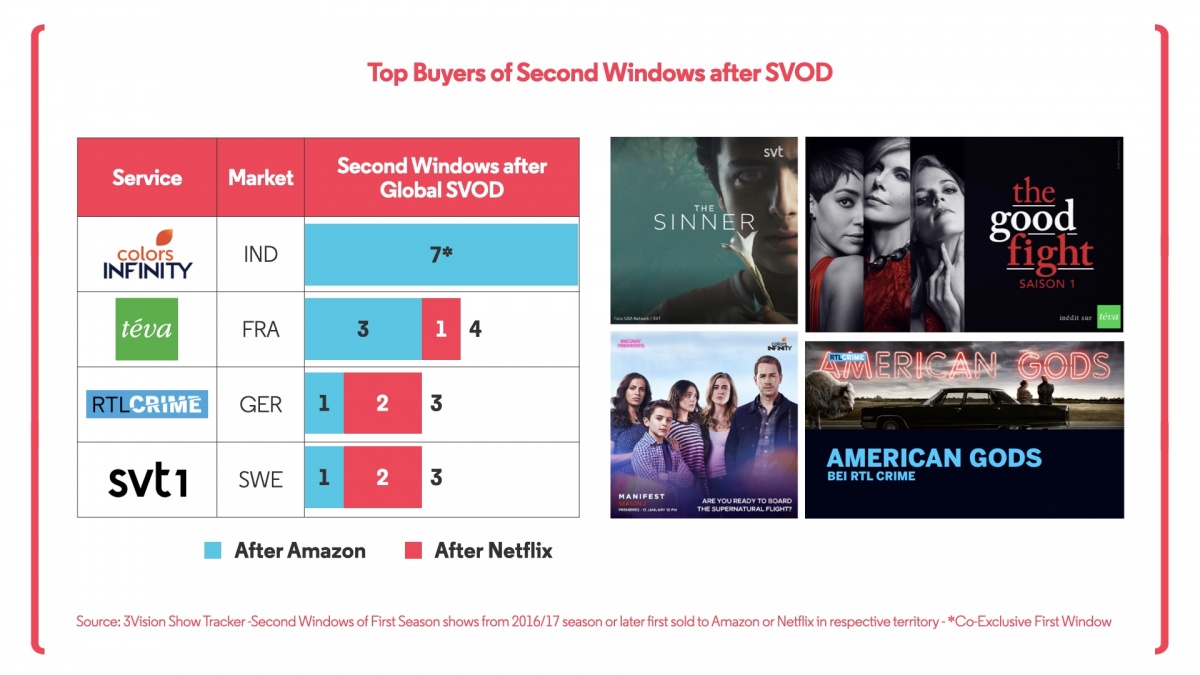 The most active in this area was for a time Indian Pay TV channel Colors Infinity, owned by Viacom18. They happily shared seven titles, all from WarnerMedia, in a co-exclusive first window with Amazon Prime. As the service had lost its catchup capability through Pay TV operator Tata Sky at the time, they were not a competitor to Amazon in the on-demand space, with all their acquisitions only ever airing on linear.

Viacom18 has since pivoted into launching its own SVOD - Voot Select - which for now at least seems to be taking advantage of Viacom18’s relationship to its shared parent ViacomCBS in its acquisition of the latest content.

Broadcasters such as RTL, M6 and SVT have also acquired second windows after SVOD in the first season but this is typically more dependent on the show itself rather than its distributor. Not all come back for subsequent seasons, with some services concerned that by acquiring in the second window all they are doing is advertising a TV show’s availability on Netflix or Amazon.

A potential solution would be to have more co-exclusive windows between Disney+ and third party buyers, so at the very least the shows broadcasters are acquiring are new, even if they are also available on Disney+. Station 19 is a special case as ProSieben likely saw how Station 19’s previous seasons had brought value, and perhaps gambled on the assumption that a 20+ episode procedural drama is a more natural fit for broadcast than on-demand viewing. Whether they engage in this type of deal for a brand new show depends on a number of factors, including how high-profile the property involved is and how much Disney would let them exploit it on their own digital adjacent service.

While co-exclusive windows have been historically more common in Asian markets such as India and China, it can be expected that the distribution arms of studios with direct-to-consumer services may look to this strategy to maximise value from their TV content libraries while also maintaining healthy, albeit quite different, relationships with broadcasters across the world.

Watch our FREE webinar on 'The D2C Streaming Wars: Disney, Netflix, Amazon and Beyond'.

Using the latest data, we took a fast-paced look at the significant developments in the D2C space, including vertical integration and the different approaches that the major Hollywood Studios are taking.

Watch it On Demand 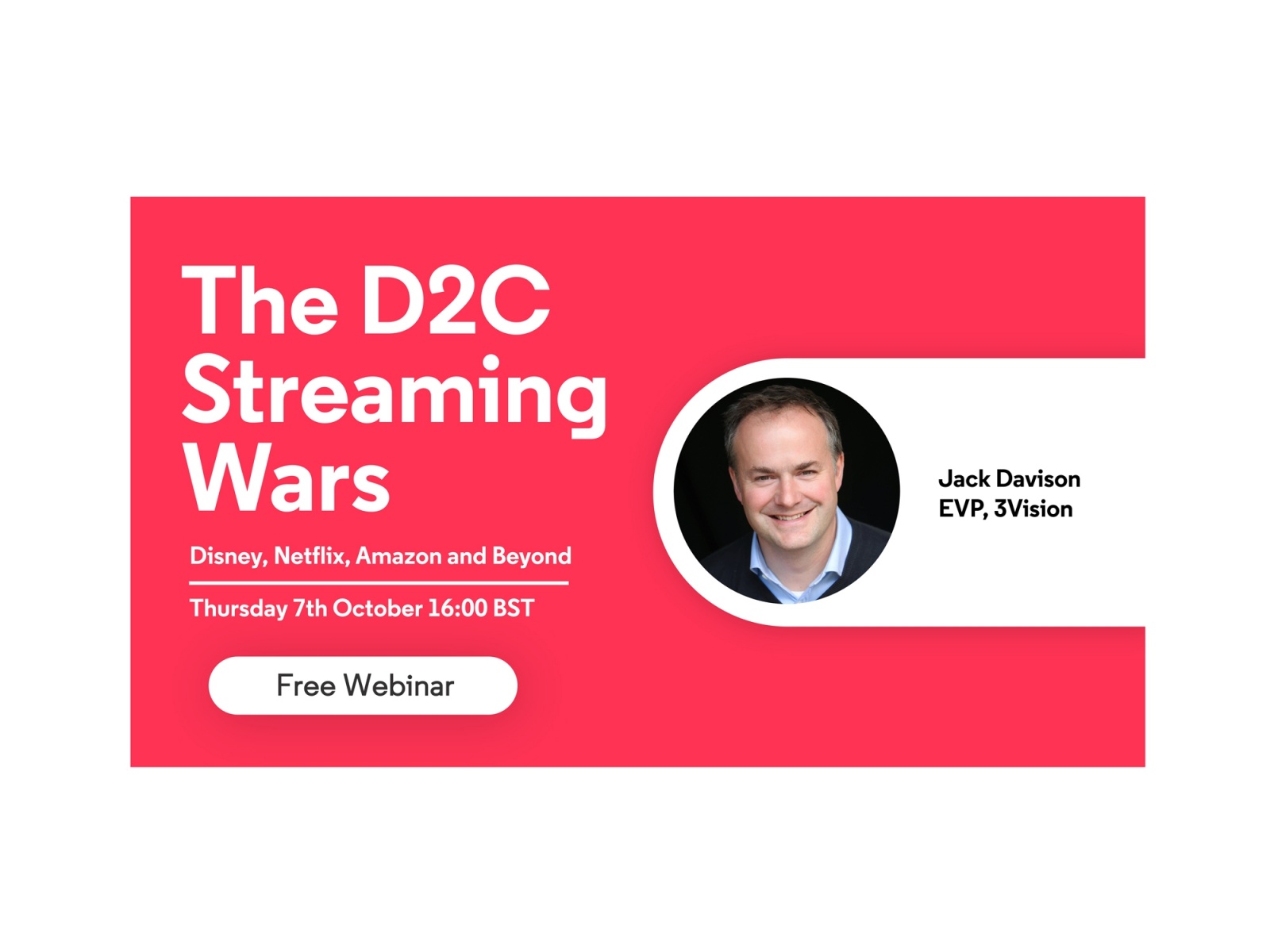