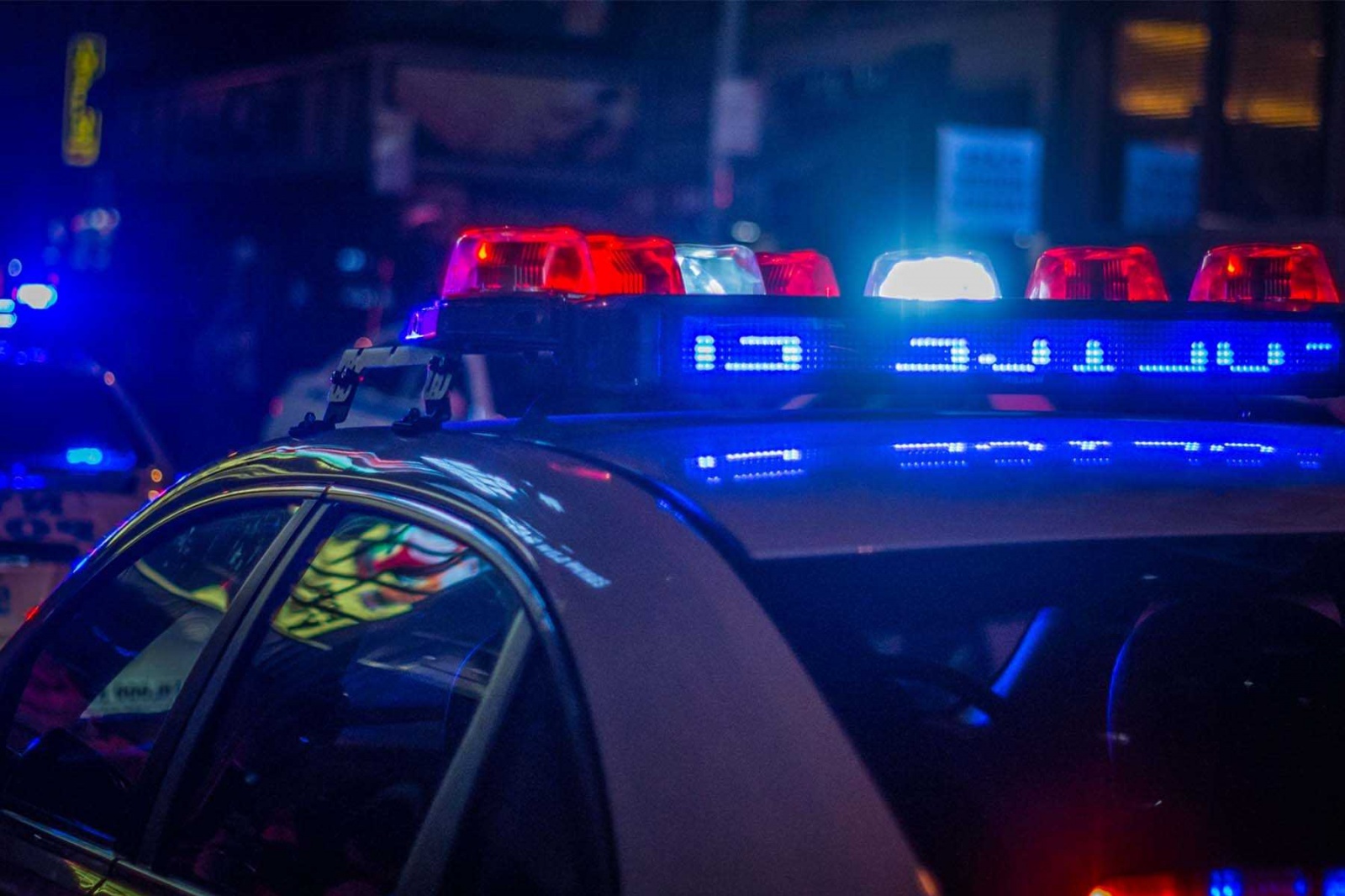 In recent years as the global streaming market has undergone huge growth in the level of Digital Original dramas, services of all types are under pressure to premiere the latest premium serial or comedy TV series. This historic focus on serial TV is potentially set to change however, as Show Tracker reveals the demand for new procedural dramas on SVOD platforms is on the rise, growing faster than the average demand for other scripted TV shows. 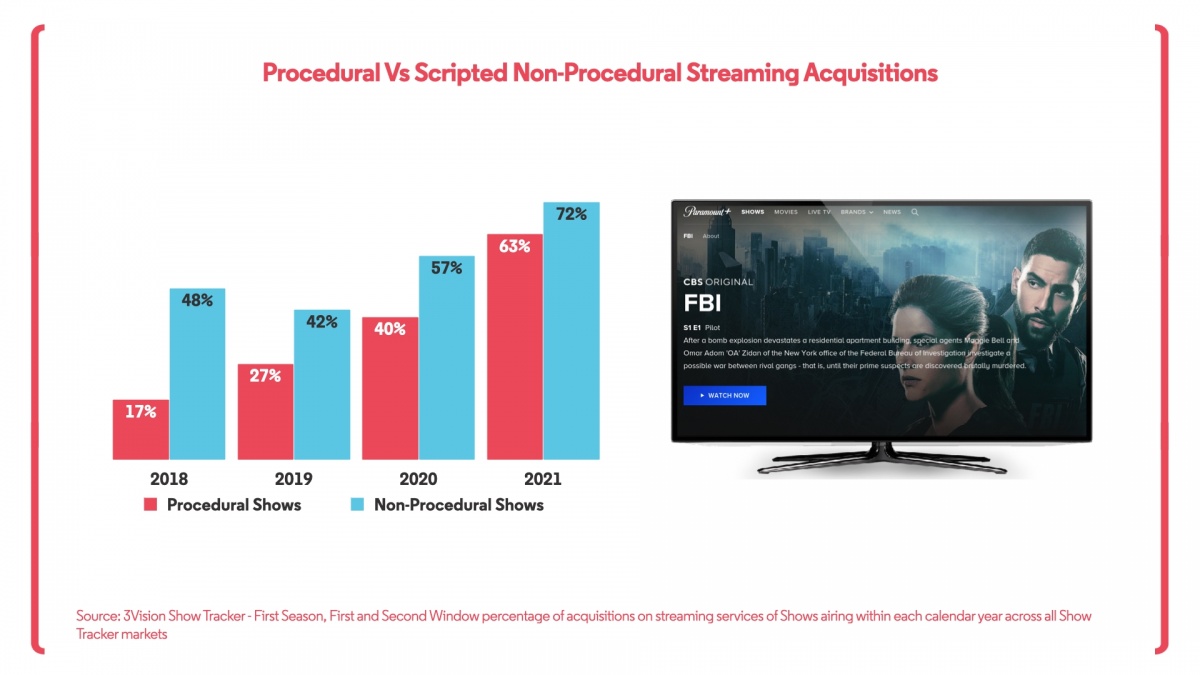 More procedural TV series are coming to SVOD than ever, with an increase in premieres of 46% over the last four years. Meanwhile the demand for other TV shows in the same time period such as serial dramas has only risen by 24%, demonstrating the value streamers place on owning the next hit procedural show. But as we’ve seen from streamers like Netflix reducing their multi-market acquisitions, SVOD may decide to ramp up their own digital original procedural TV shows, rather than acquire from third party distributors.

What SVOD can’t do however is produce a procedural hit overnight as the most popular TV shows in this genre typically are some of the longest running ones. Recent data from Nielsen shows how well-known procedurals are king in the streaming space. Throughout all of 2021 in the US, three of the four most streamed shows on any streamer were procedural shows, all with over 15 seasons. 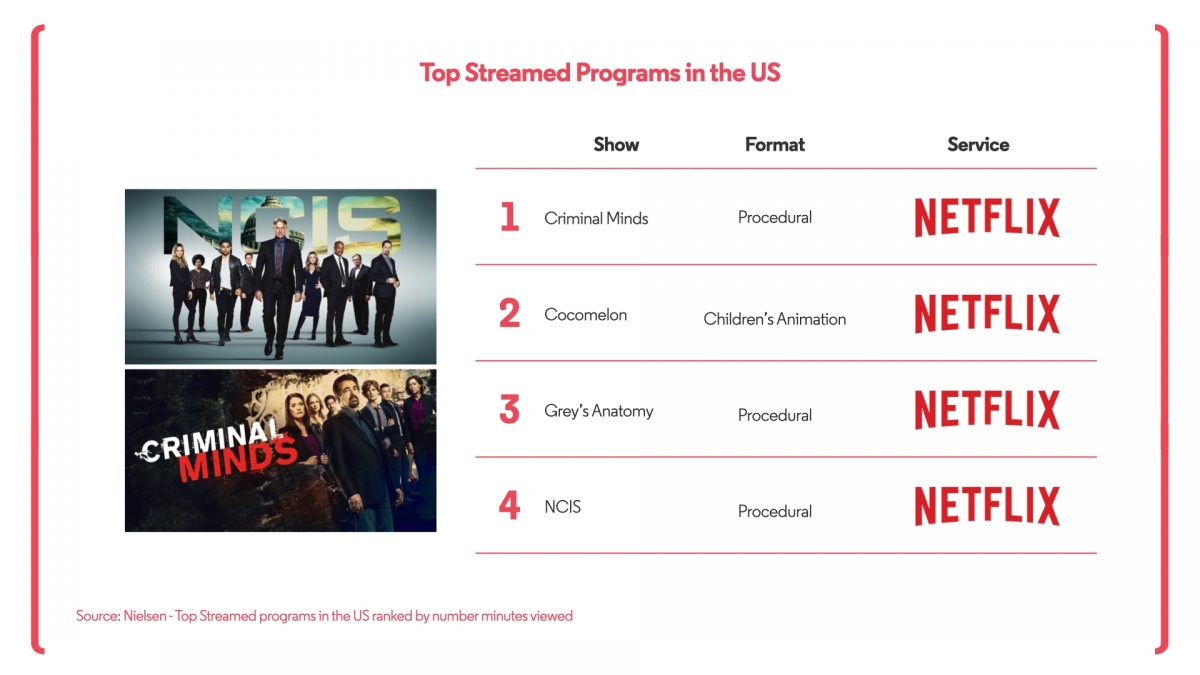 Despite ending its 15 season run in early 2020 ‘Criminal Minds’ tops the streaming ratings with just under 34 billion minutes watched last year, massively outstripping Netflix’s own shows ‘Lucifer’ and ‘Squid Game’ who clocked in 18 billion and 16 billion minutes respectively. Reliable sources of views such as these can’t compete with digital originals in completion rate however, as ‘Squid Game’ still outperformed Criminal Minds when the viewing minutes is compared to the number of episodes available to watch. With only nine episodes compared to hundreds, ‘Squid Game’ has achieved. far more minutes viewed per episode, helping make the case for more South Korean Digital originals from multiple SVODs. 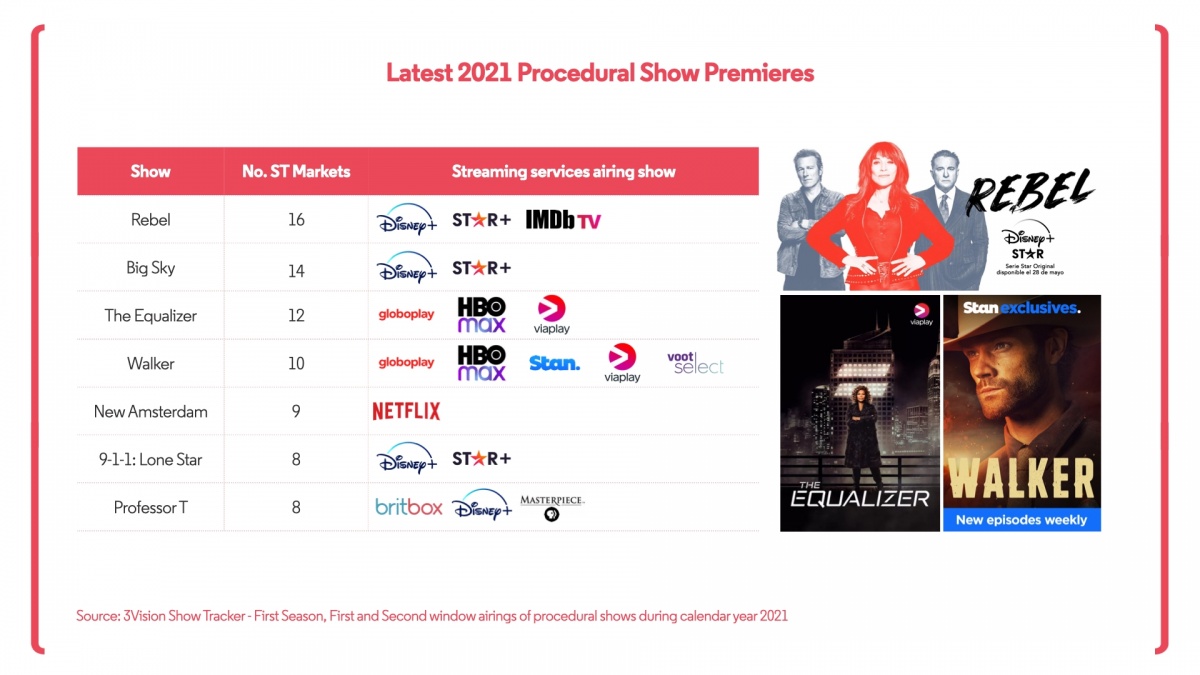 Looking at the latest premieres of new procedural TV series in 2021 reveals the most of the top selling procedural shows were sold as part of multi-market deals or benefitted from vertical integration which is becoming more prevalent in every market. The top two premiered shows in Show Tracker markets are both Disney shows airing as Star Originals on Disney+ or Star+, with both airing in at least 12 markets on the same platform. Disney has been leading over its studio rivals in terms of vertical integration since the launch of Star and by doing so here it may help Disney corner the market of the next long running procedural, potentially edging out local competitors in multiple global markets of new procedural premieres that have typically been the hallmark of terrestrial television. Even if these TV shows don’t take off, the studio still has both its own ‘Grey’s Anatomy’ and ‘Criminal Minds’ on Disney+ in most markets outside of the US, with proven value for SVOD services.

Further down the list the acquisitions of these shows get more varied with NBCUniversal’s ‘The Equalizer’ premiering on 12 completely different services and ViacomCBS’s ‘Walker’ appearing on 8 different services. Despite the ongoing dominance of D2C streamers with vertical integration, and the streaming giants like Netflix and Amazon there is still potentially some room for local buyers to acquire well sought after procedural shows.

Given the ongoing expansion of streamers such as Paramount+ and HBO Max it’s safe to say the market for new procedural shows, not already under the banner of vertical integration, is only going to get tougher for local buyers as time goes on. With time and popularity comes more seasons, so with the market already dominated by older library procedurals expect more streamers to take a bet on newer shows, especially spin-offs with established formats such as 2021/22 shows, ‘NCIS: Hawaii’, ‘CSI: Vegas’ and ‘FBI: International’ as they look to cash in on the ramped up interest in procedurals.