What Amazon will do with MGM

With Amazon confirming its purchase of MGM for $8.45bn Show Tracker data reveals what scripted TV MGM has brought to Amazon Prime in the past and how it might help more directly in the future. 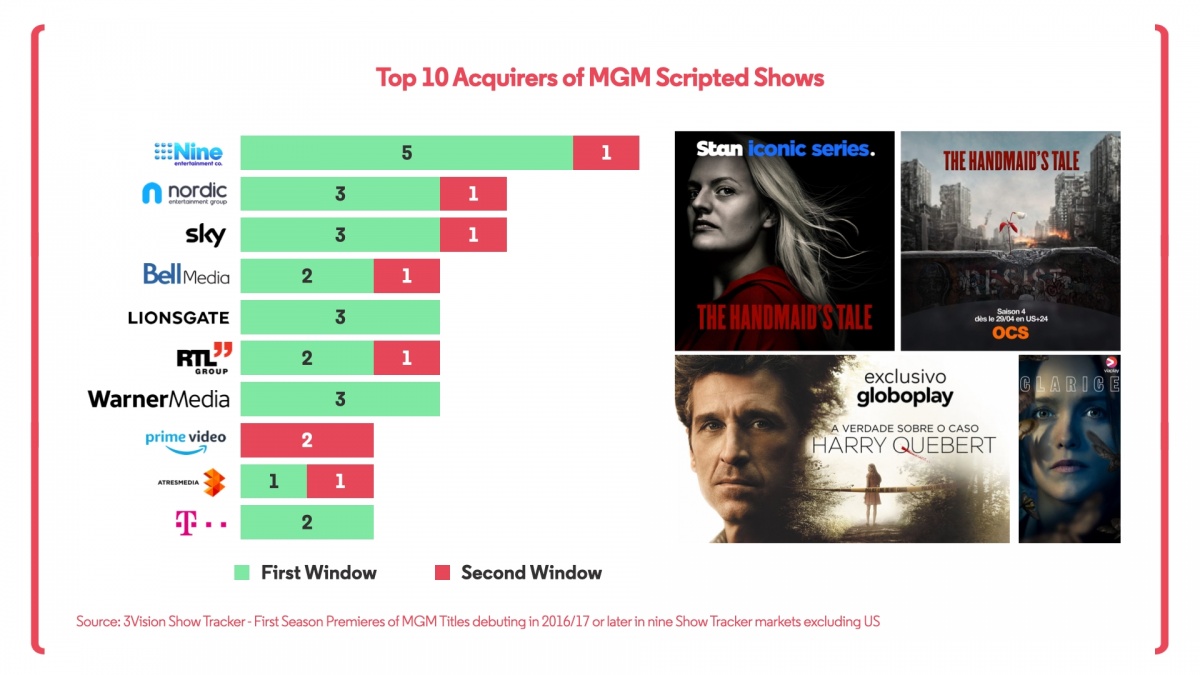 Amazon has not in fact had much of a prior relationship with MGM’s TV content internationally. They have engaged in no major first window multi-market deals and are instead fairly active in the second and third window, acquiring ‘The Truth about the Harry Quebert Affair’ in Spain after Movistar and ‘The Handmaid’s Tale’ across France, Germany, Italy and UK after initial debuts on other services.

MGM has however engaged more directly with the Amazon platform itself with its MGM Amazon Channel which provides access to several library MGM movies. The channel has been a frontrunner in most territories where Amazon Channels is available and has been met with high demand from users. Amazon is likely to be as aware as MGM is of their success in this space and even their older library movies should provide a valuable boost to the Amazon catalogue. You can listen to more of MGM’s strategy on Amazon Channels on our podcast Inside Content, where we interviewed Chris Ottinger, President Worldwide Distribution and Acquisitions.

Up until now MGM had held an ever-growing unique position in the TV content market as a distributor of US TV shows without international Direct-to-Consumer plans and a limited number of output deals compared to distributors like WarnerMedia which currently have output deals in virtually every market they don’t have a D2C avenue.

Certain stand out MGM shows such as ‘The Handmaid’s Tale’, commissioned by Hulu, have performed especially well for the distributor in multiple windows. Its critical acclaim has made it extremely sought after, with Pay TV operator Sky in the UK even opting to acquire a second window after its original Free TV debut as a digital-only release for Sky Boxsets and Now TV.

The extent to which Amazon decides to integrate MGM will in turn effect how much more challenging the US TV acquisition market will become for international services hoping to acquire quality US TV content in the first window. 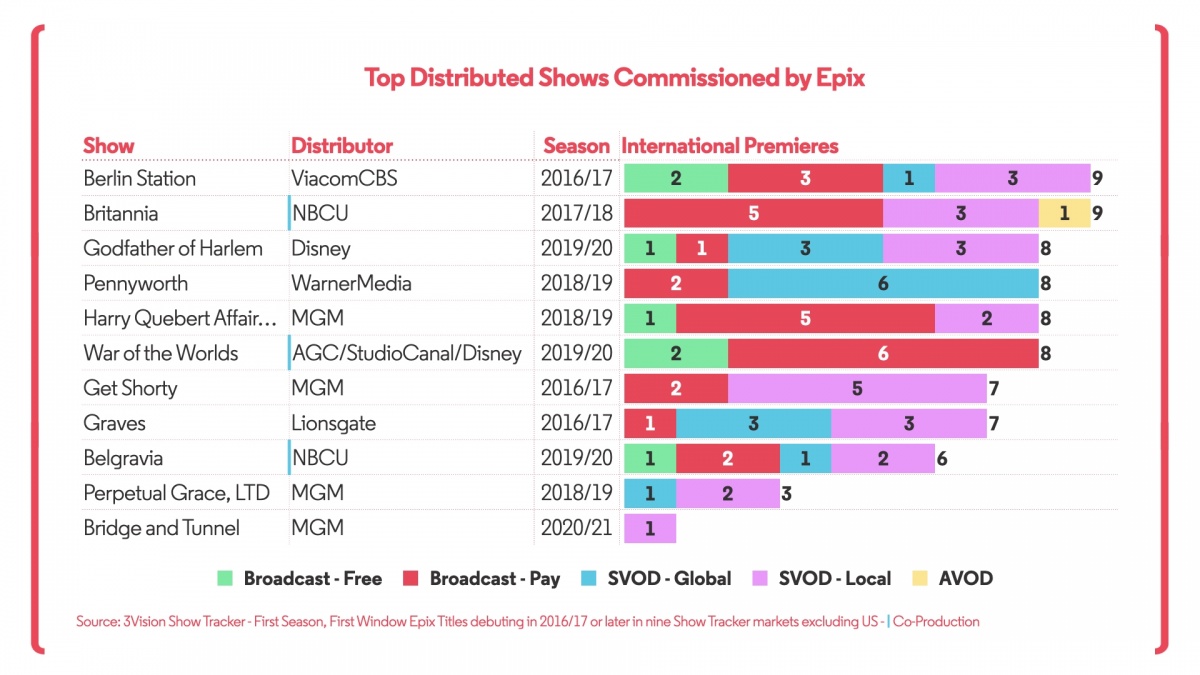 It’s not just the distribution arm’s future that is in question but also MGM’s channel business, mainly Epix in the US. This premium cable channel has commissioned four premium drama titles from MGM since the 2016/17 season while also maintaining steady engagement with other third party distributors.

Most titles have had healthy distribution, regardless of their distributor, demonstrating the demand for premium drama from many service owners that are unable to acquire similar calibre content from rival commissioners such as WarnerMedia’s HBO.

The Amazon relationship is slightly more prevalent in the US with some specific titles. ‘The Truth about the Harry Quebert Affair’ went to Amazon in the second window less than a year after Epix, which continuously delayed the title for such a long period it had aired in multiple international markets ahead of any availability in the US. 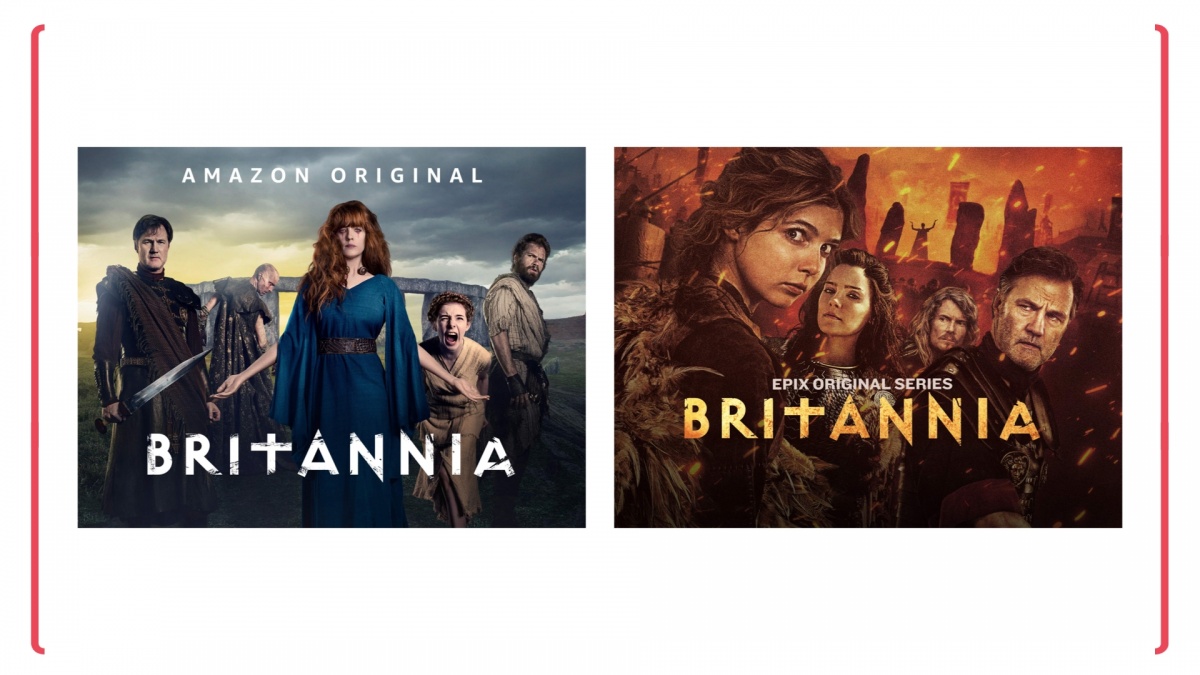 ‘Britannia’ meanwhile was originally a Co-Production between Sky in the UK and Amazon Prime, although they only took the rights to air in the US from NBCU (then Sky Vision). Amazon exited after the show’s second season, leaving Sky renewing for a third season while simultaneously looking for a new US partner. This partner was found with Epix who took a second window of the first two seasons after Amazon in the US and became the debut home for season three, potentially bringing Britannia back into the Amazon Original fold down the line.

Excitement is of course abound at any potential exploitation of the Bond IP by Amazon, but the acquisition of MGM won’t allow them to sidestep Eon Productions, who have final say on how the franchise is used.

What Amazon is acquiring is a company that has a proven track record at producing critically acclaimed premium drama, the type of content Amazon is clearly interested in seeing come to the service considering they recently signed deals with Showtime and Starz to take a number of their shows in the second window in the US.

How Amazon treats the other aspects of the business depends on their priorities. Conventional wisdom may suggest they aren’t in need for a distribution arm if all of their produced content is Direct-to-Consumer, but Amazon may choose to capitalise on MGM’s experience to sell their own Original content in the second window or to markets without Amazon like China.

Even more absurd to some would be an Amazon owned premium cable channel. While it may give Amazon Originals some small level of prestige if they debuted on Epix linear at the same time they are made available online, it is more likely that Epix will be the first casualty when the Amazon takeover is fully complete. Most of the distributors providing content for commissions (Disney, Warner, Lionsgate, ViacomCBS) are all rapidly expanding their own Direct-to-Consumer efforts, so the channel would inevitably become more and more reliant on MGM alone for new content. Putting it in a precarious position, with or without new ownership.