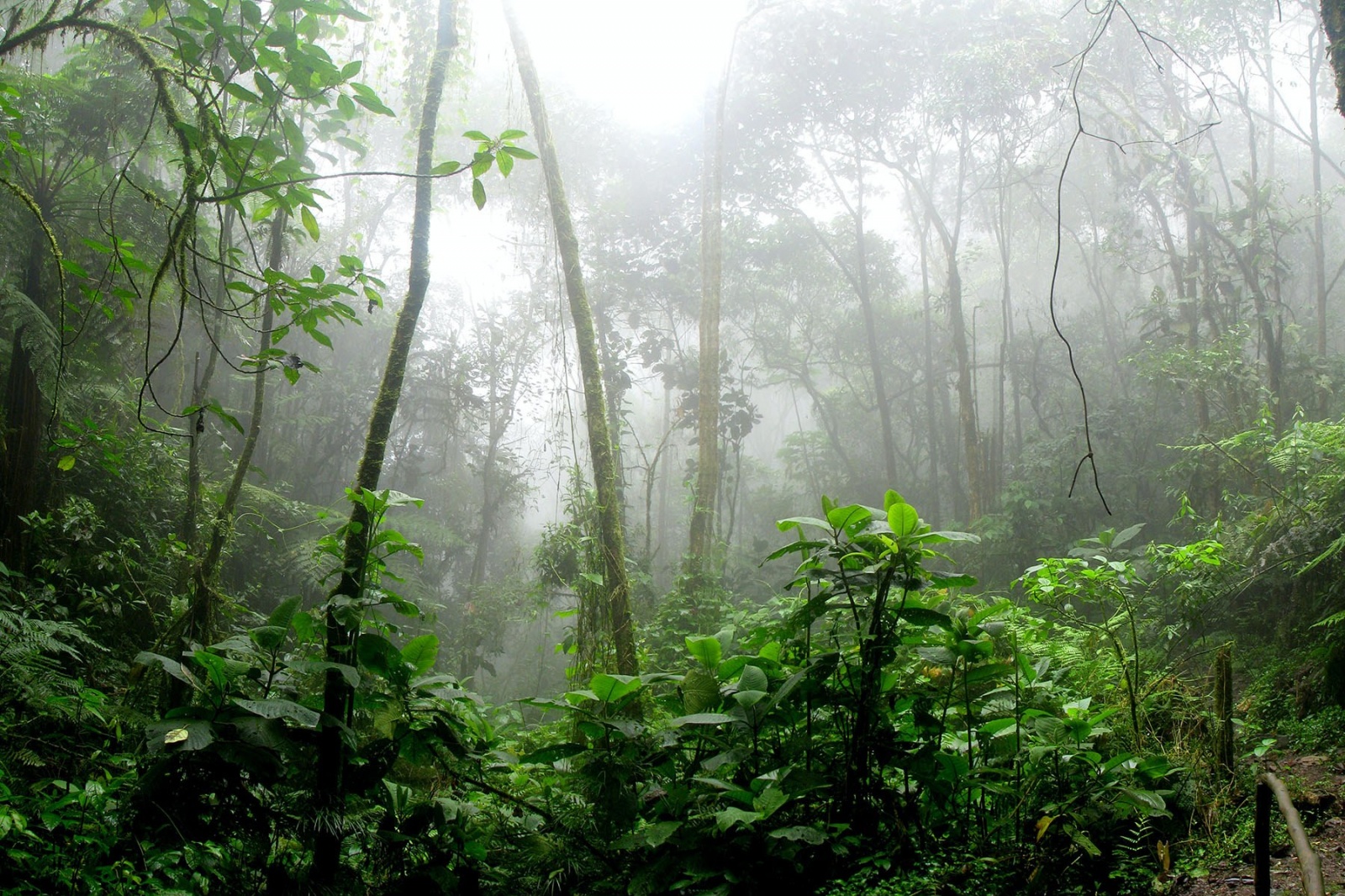 Amazon’s Digital Original output has maintained a steady average of seven new English language scripted shows a year since 2017 while Netflix has accelerated its Digital Original production, debuting 48 new English language scripted titles in 2020 alone. As part of this focus Netflix has begun to withdraw from the US acquisition market, in both the first and second window.

Show Tracker reveals that domestically in the US where Netflix once dominated second window acquisitions, it is now acquiring fewer than ever, and Amazon is now stepping in to fill the gap left behind. 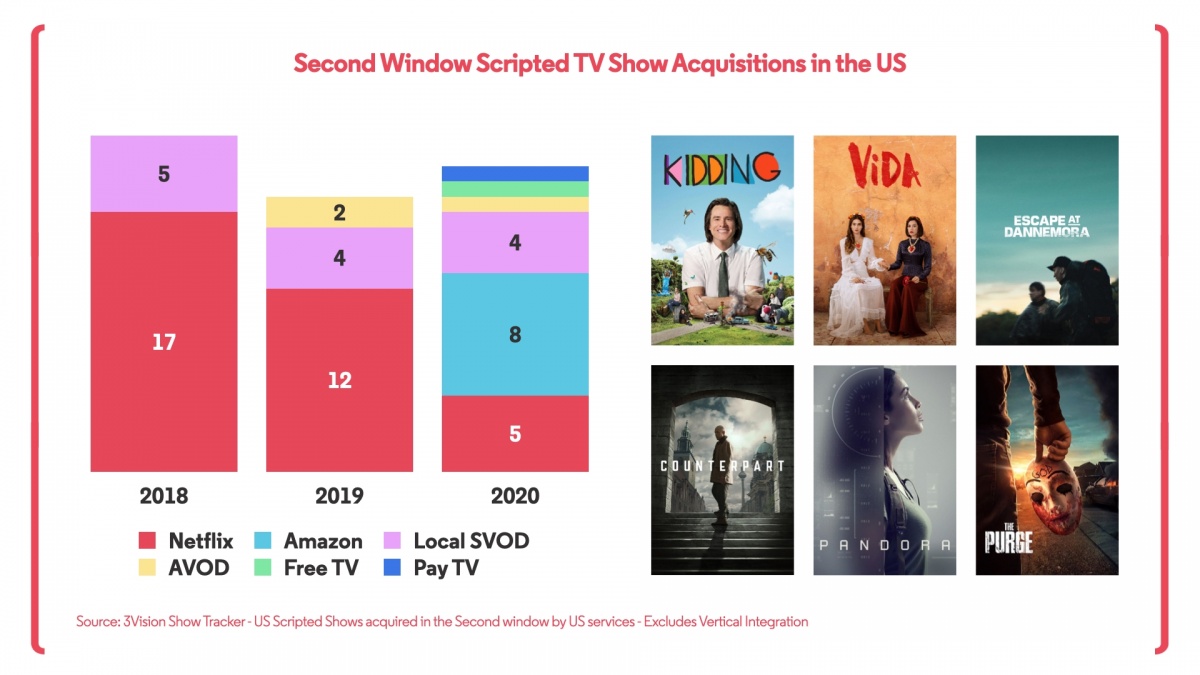 Lionsgate and ViacomCBS sold Amazon the most second windows in 2020, with titles originally debuting on Starz and Showtime helping to bolster the service’s library of premium drama. This also confirms that subscribers to Paramount+ are unlikely to see Showtime content surface on it anytime soon, as was suggested by ViacomCBS CEO Bob Bakish when he described Showtime’s content as “more coastal” than the broader Paramount+ library when the SVOD launched earlier this year. Internationally Amazon is also acquiring far more content than Netflix in both the first and second window. 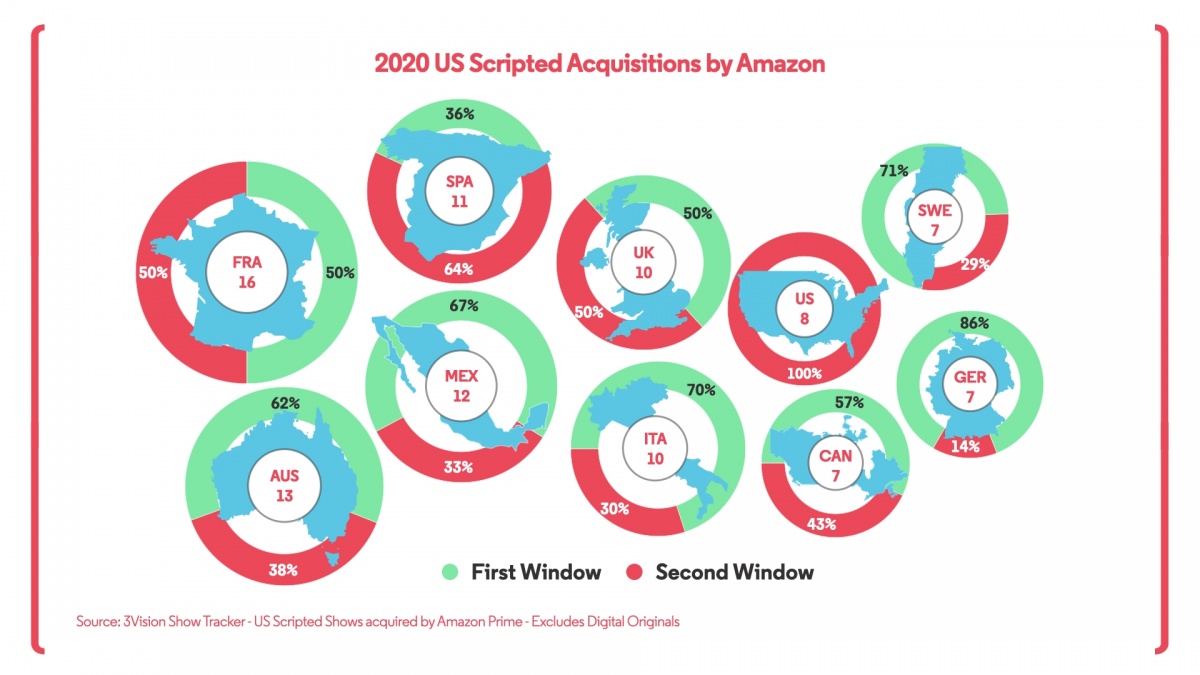 Amazon Prime accounted for over 100 premieres in 2020 in both the first and second window, across ten Show Tracker markets, compared to Netflix which only had 37. Markets that typically skew low for sales of US content such as Italy and Mexico conversely perform quite well for Amazon, as the limited buyer activity inevitably strengthens their position in the market and makes them attractive to distributors.

Sweden meanwhile has a heavy SVOD presence, both from WarnerMedia and NENT, who’s Viaplay is the second largest buyer of content in the market, which has a definite effect on Amazon’s ability to compete for content on a local level. Even in these less active markets, Amazon’s multi-market deals with distributors help ensure a comfortable baseline of new content for each market. 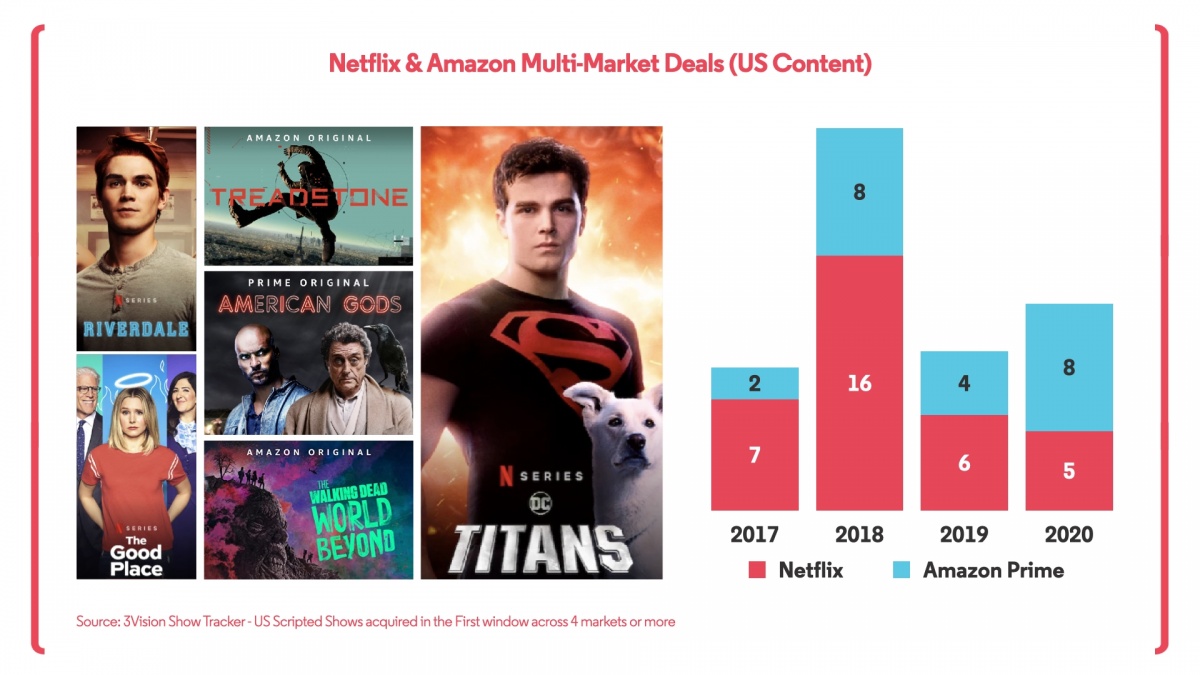 Netflix’s reduced acquisition activity extends to its engagement with multi-market deals, while Amazon has maintained relatively steady levels of these types of acquisitions. Whether these types of deals continue is not necessarily up to Amazon as many of the distributors they have engaged with in the past in multi-market deals (Disney, ViacomCBS, NBCUniversal) now have direct-to-consumer initiatives of their own, most with international expansion in progress. Amazon doesn’t operate exclusively in multi-market arrangements however, adopting a local approach in markets where opportunities present themselves. 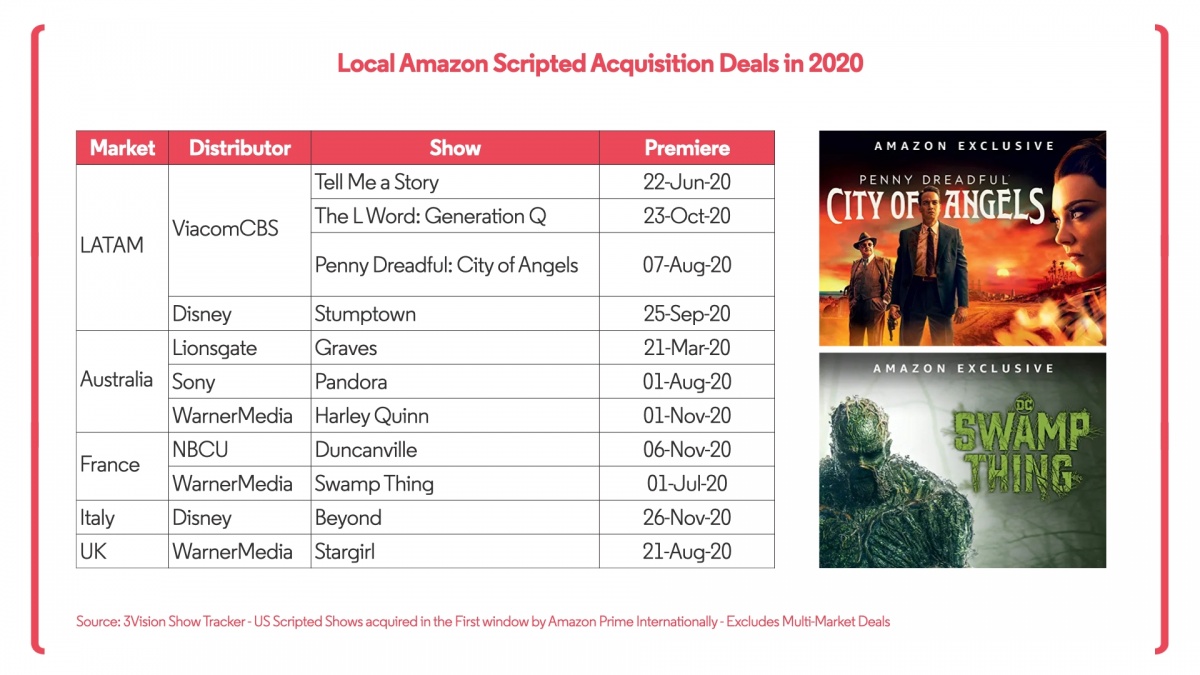 Netflix only had two local first window deals in 2020 - ‘Waco’ from Endeavor in Canada and ‘The Kids are Alright’ from Disney in Latin America. Amazon meanwhile is a more active buyer, both in markets with limited buying such as LATAM but also in stronger markets such as Australia which otherwise has many high quantity, local buyers like Foxtel and Nine Entertainment.

While Netflix tries to get ahead of the day the biggest distributors stop licensing their content by producing huge volumes of Digital Originals, Amazon is taking a more restrained approach, especially as most subscribers to Amazon Prime are getting more than just a TV and Movie offering with their subscription.

In the short term Amazon will likely look to take advantage of its position as a dominant buyer in otherwise difficult markets to acquire quality US content, while filling the gap Netflix once took in the first and second window in the US and international markets. This is not to say that Amazon is not prioritising original content, after all it is reportedly spending $465M for the first season of its ‘Lord of the Rings’ TV show, but its many revenue streams allows the company to take a less urgent approach than Netflix in its transition to a content world one day populated by countless studio owned direct-to-consumer services.