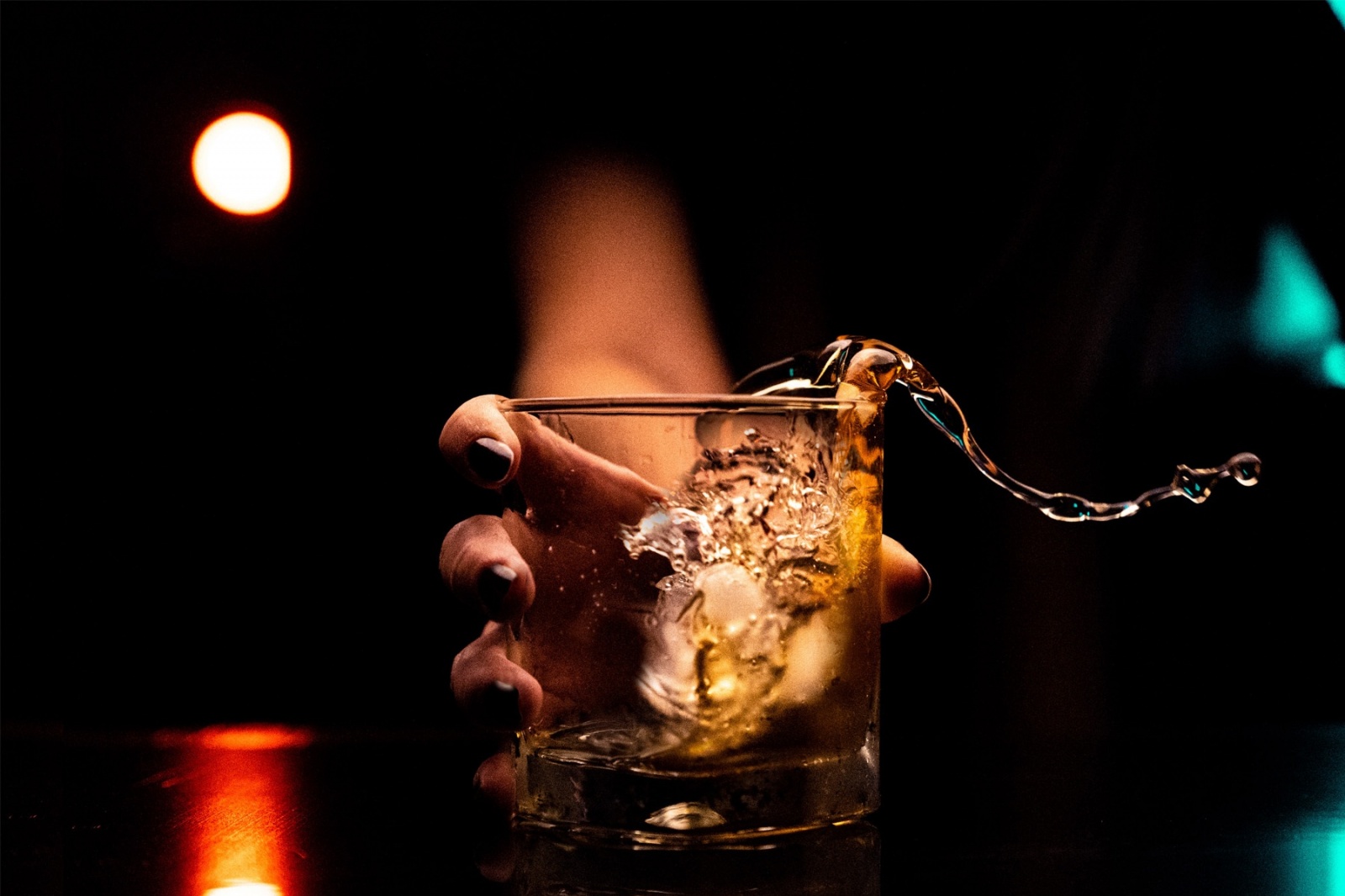 New services entering the fray are challenging the once common place ability to binge an entire season of a show from its first day of release on an SVOD. While Netflix has long established a precedent of releasing its digital originals as boxsets the latest studio SVODs that are emerging as its main competitors are tending to opt to stack their TV series weekly instead.

Show Tracker reveals meanwhile from the broadcast perspective the stark difference in release strategies between UK and US broadcast commissioners. 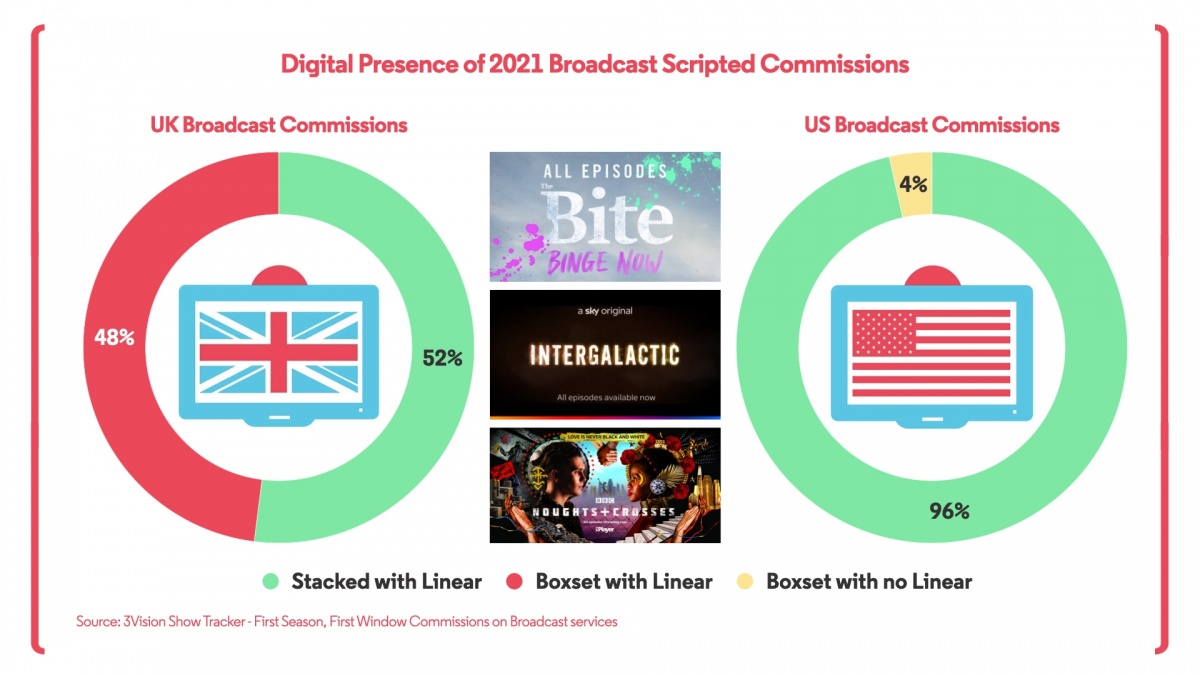 Almost half of UK broadcast commissions in 2021 were released simultaneously as boxsets on digital adjacent catch-up services. The British broadcast response to the challenge brought by Netflix and Amazon in their home territory was to mirror their release schedules, granting their viewership the opportunity to engage with content on their digital AVOD counterparts the same way they would with the SVODs they had come to adopt at record pace.

The picture in the US however appears to show little engagement in this area, with the only boxset in 2021 instead coming from Spectrum, a Pay TV operator rather than a network or cable station. That is not to say that US broadcast owners do not engage with boxsets at all. Where UK broadcasters such as ITV and Channel 4 continue to invest in their digital strategies as digital only AVOD platforms come in to snap at their heels, US Studios instead have their own SVOD platforms. Studios are able to supplement the digital originals on their US services further with the digital footprint of their linear channels - adding new episodes to their SVOD services as each episode airs on TV. 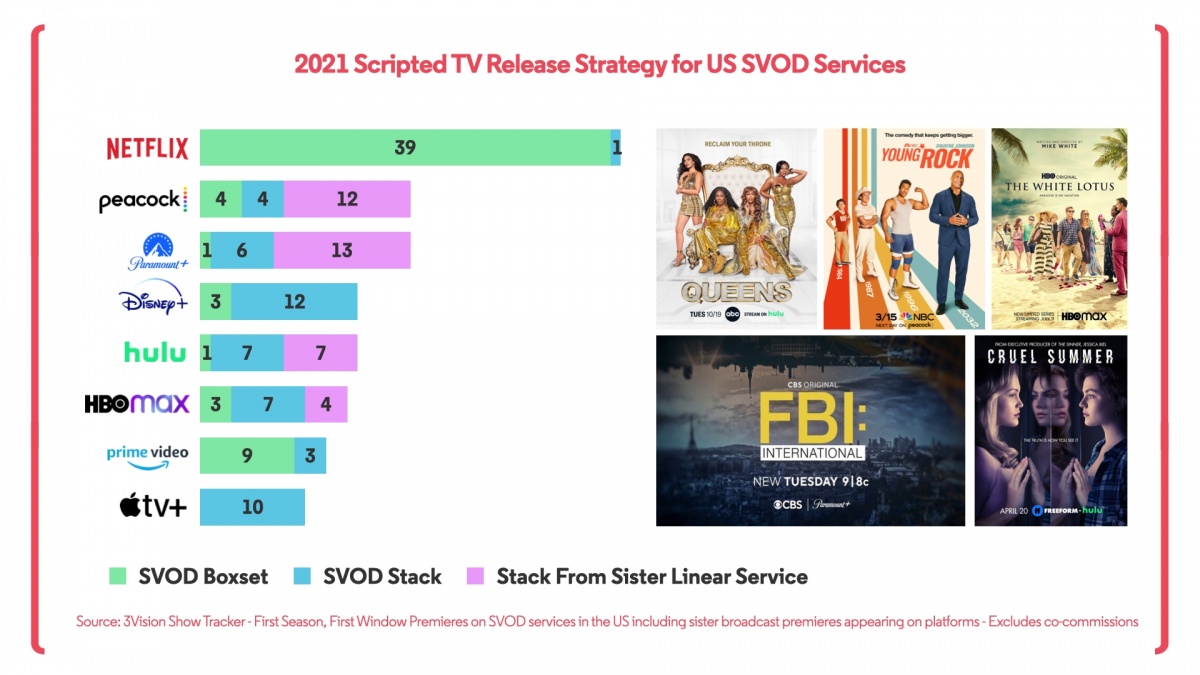 While digital original output alone only puts Netflix and Disney+ above Amazon Prime in terms of new releases in 2021, the flow of content from studio’s sister linear services means all the studio SVODs were able to make more new content available for its subscribers than Amazon, who only beats Apple TV+ in these totals due to neither SVOD service having a linear pipeline to pull from.

While some of these supplemental titles from linear come from basic cable channels owned by studios and therefore have no immediate value-add to their respective SVOD subscription, it potentially grants some consumers, depending on their tier, a way to view the latest TV in an ad-free environment. For Warner however, HBO Max grants its subscribers access to all its titles debuting on HBO linear without them requiring a cable subscription, effectively adding more originals for SVOD-only subscribers to watch.

The inclusion of linear titles coming to SVOD services in the US either day and date with their linear broadcast or at most the day after further saturates the SVOD release strategy in the US with weekly releases rather than full season drops via boxset. Amazon and Netflix are the only SVOD services that release the majority of their TV series as boxsets.

SVOD services in their early launch period, particularly if they offer a free trial, are incentivised financially to keep their TV shows going on as long as possible so subscribers can’t binge the shows they are interested in within one month before churning from their service. Since their early days studio SVODs have begun to boxset more titles here and there, but their most high profile TV series, those most likely to result in conversions to their platform, are almost always stacked weekly.

As studio SVODs start to challenge Netflix more and more in pure volume of digital original releases and the service itself under pressure to adopt new strategies such as ad-tiers and the end of password sharing, consumers’ expectations for everything to be released as a boxset may change to accept, and perhaps even appreciate, the return of the weekly release of their favourite TV series. While Netflix appears to be continuing to hold fast on its boxset approach for its digital originals, its plans to potentially reduce spending on new content may force them to adopt a weekly release schedule to both keep subscribers engaged on their service longer but also to keep an illusion of a constantly updating catalogue. A full season release allows its subscribers to watch a show on their timetable but also reduces the event of a big release from a ten week period to a weekend for some of its most diehard users who will then be promptly looking for the next thing to watch. Smaller and more frequent drops of content in a weekly stack may ultimately produce more engagement than Netflix’s traditional approach of producing rarer, but larger, splashes in their content pond.

What are the Studio SVODs up to?