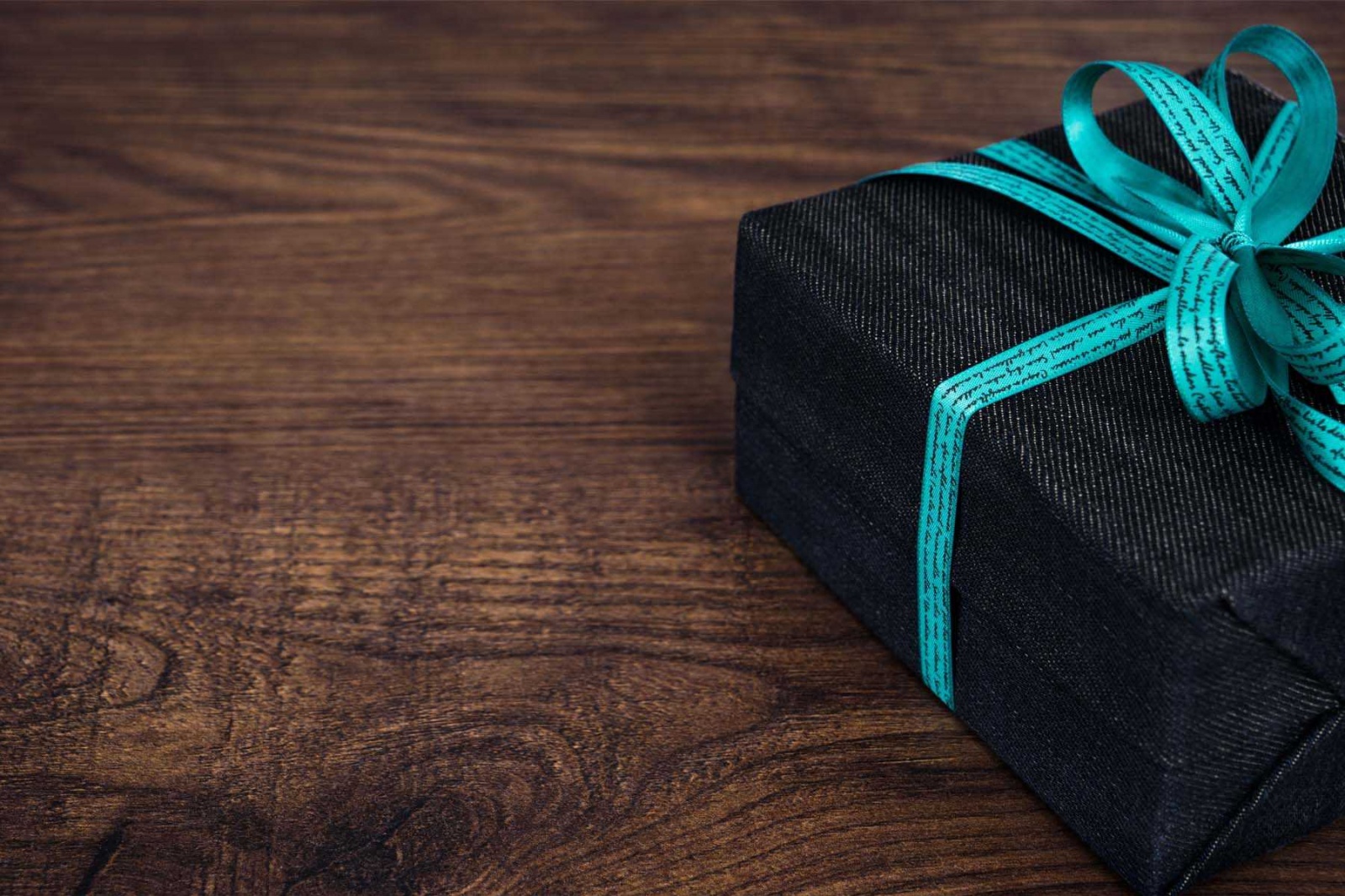 ITV announced this week the launch of a new AVOD/SVOD service, ITV X, launching in 2022. The service is set to finally unify its content approach, with its focus previously split between its linear channels, AVOD service ITV Hub (with ad-removing subscription tier) and separate SVOD service BritBox. The commitment to a unified approach in the UK is apparent in the broadcaster’s decision to buy out the BBC’s stake in BritBox, with plans to include its library as part of the ITV X paid tier.

While in previous seasons a number of key commissions on ITV channels were co-produced with US service backing, Show Tracker reveals that in the 2020/21 season the only co-commission aired by ITV services was ‘The Beast Must Die’, co-commissioned by BritBox and AMC+. 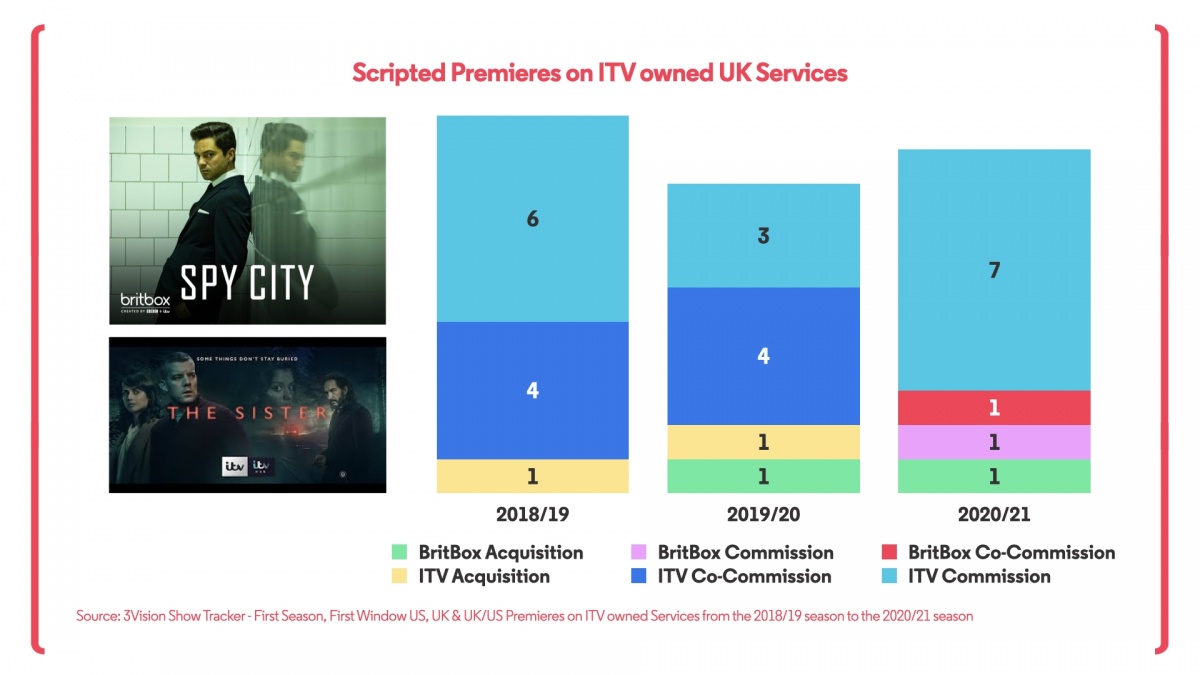 US acquisition activity from ITV has remained low for some time with the last season seeing no new US TV shows being acquired by the broadcaster. Its volume of commissions historically for the past three seasons has put it in second place amongst British services but ITV’s suite of channels has not managed to commission even half of the total scripted content commissioned by the BBC. 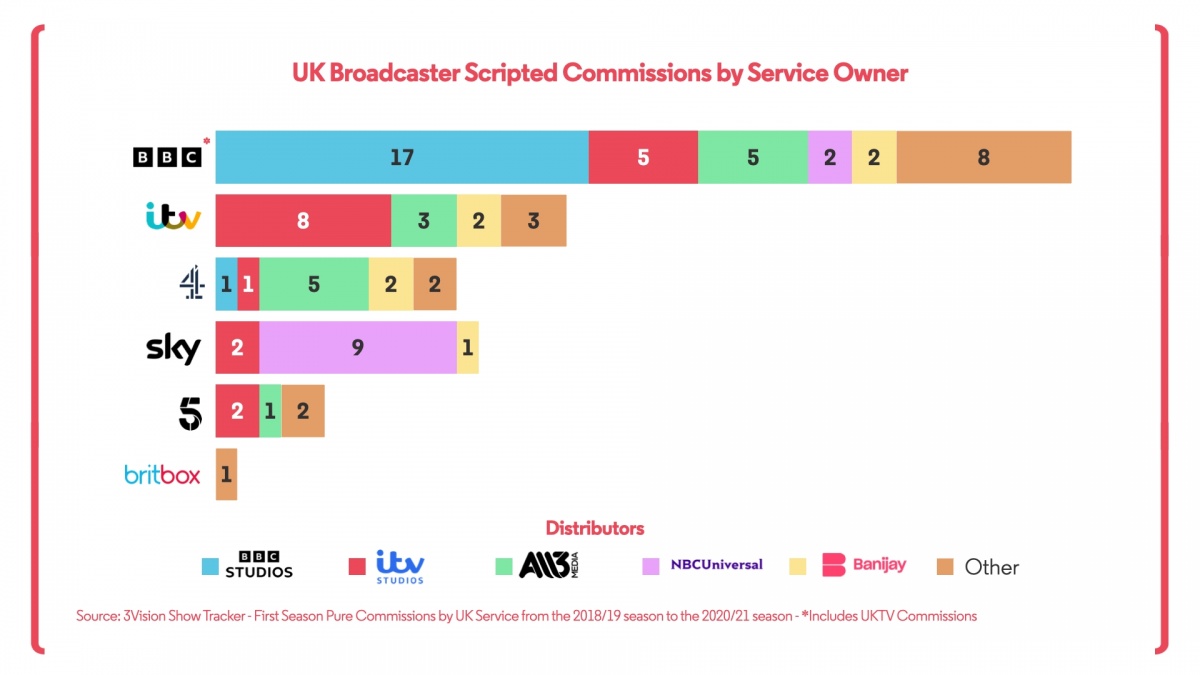 It is not uncommon for broadcasters in the UK, or any market, to draw commissions from third party distributors even if they have their own partner studios. The output from BBC Studios alone is just enough to keep the BBC broadcaster ahead on commissions by itself, but a number of third party distributors further supplement its commissioning output. ITV Studios is one of these suppliers, responsible for some of the BBC’s most critically lauded commissions such as ‘The Bodyguard’ and ‘The Girl Before’.

ITV also has a number of its own commissions distributed by third parties, most notably from the very active All3Media in this space, but sees no reciprocation from BBC Studios. The distributor has only supplied one commission to a third party broadcaster in recent seasons, ‘Dead Pixels’, to Channel 4’s Free TV channel E4.

ITV Studios distributes commissions from a number of its broadcast rivals, both in Free and Pay TV, but were it to take a more self-serving approach it would put it much closer to the BBC’s output. 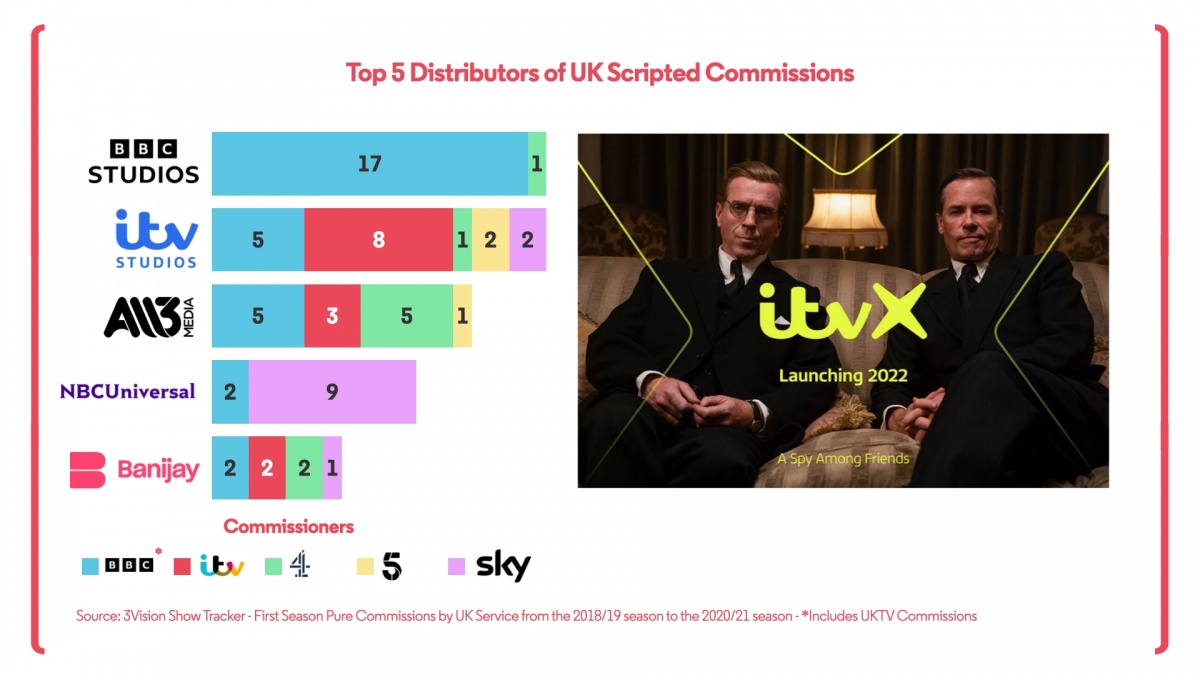 ITV Studios has been responsible for the distribution for the same number of commissions as BBC Studios but has done so for a wider variety of services. With the service aiming to launch with 15,000 hours of content at launch, over triple the number of hours currently available on ITV Hub, the broadcasters may try to push ITV Studios to engage in more vertical integration, producing and distributing shows more exclusively for ITV owned services, mirroring the trends seen from US Studios for some time now.

Not only can this drive for new content from ITV X affect the ability for other broadcasters like the BBC to get TV series commissions from ITV Studios on their services, it may also make ITV a more competitive buyer with third parties, supplementing their launch line up with commissions distributed by third parties in a similar vein to HBO Max in the US at its launch, potentially making broadcasters like BBC and Channel 4 struggle to get commissions from prominent third party distributors like All3Media, Banijay or Fremantle in the future.

Until this announcement, ITV had to balance driving advertising revenue for its linear channels, pushing use of its broadcaster AVOD catch-up service ITV Hub and encouraging a growth in subscribers on its SVOD BritBox. All of these initiatives likely undermined one another in their current state, restricting overall growth in subscribers.

The broadcaster’s commitment to boxset all new scripted releases on ITV X on the same day as first episode premiere on linear reflects are larger trend seen from Free TV for some time. On top of this however the broadcaster is committing to premiering dramas first on ITV X, before arriving six to nine months later on linear. With this the broadcaster will hope to mirror some of the successes of international broadcasters in prioritising digital over linear.

Sitting alongside this digital first windowing strategy will be 20 FAST channels, themed after popular shows like ‘Hell’s Kitchen’ or ‘The Chase’ as well as themed channels covering areas such as true crime or 90s TV series. In our latest industry trends survey it was revealed that executives believe it is themed FAST channels that could expect to see the highest revenue prospects. It demonstrates a recognition and willingness from ITV to react to the growing number of AVOD services, some with FAST platforms of their own, that are beginning to challenge traditional Free TV.

ITV X will no doubt attract more attention from a variety of distributors looking to sell their content in the UK as the service will be seeking brand new commissions, library content and FAST channels to further supplement the service, making the broadcaster a potentially lucrative target for those few distributors that are able to offer all three of these content pipelines.

Show Tracker is an essential tool for the TV industry, which monitors where TV shows are being sold around the world and the rights attached to each deal. Tracking over 1,400 TV shows and 350 different services in 19 markets, it provides a unified view of the distribution market. Show Tracker gives you data you can trust to drive your strategy forward and give you the edge in negotiations