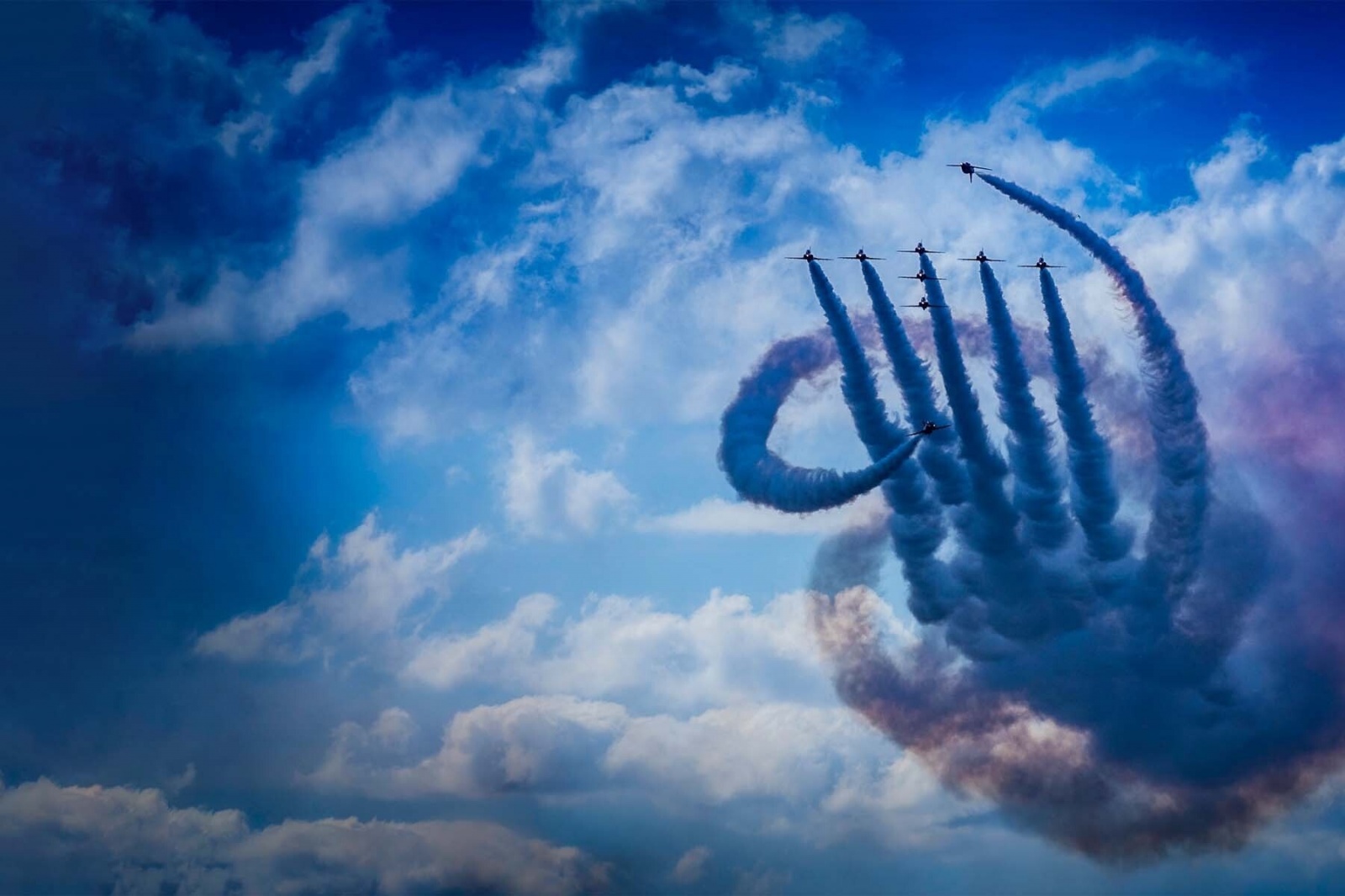 Sky’s owner Comcast and ViacomCBS have extended their partnership to launch a brand-new streaming video service ‘Sky Showtime’. The new service is planned for launch in 22 European TV markets, with an initial focus on Iberia, Eastern Europe and the Nordics next year. The SVOD service will be a 50/50 joint-venture, bringing together the vast catalogues of each partners assets, including output from Showtime, Paramount Pictures, Paramount+ Originals and Nickelodeon from ViacomCBS and Sky Studios, Universal Pictures and Peacock from Comcast.

This new premium subscription service follows hot on the heels of their recent announcement just last month, with the planned integration of ViacomCBS’ Paramount+ service to the Sky platform in the UK & Ireland, Germany, Italy, Switzerland and Austria. The deal for Paramount+ was part of a bigger agreement that will see the continued carriage of ViacomCBS Pay-TV linear channels on Sky, and that Sky will continue to handle their ad sales in a number of markets. 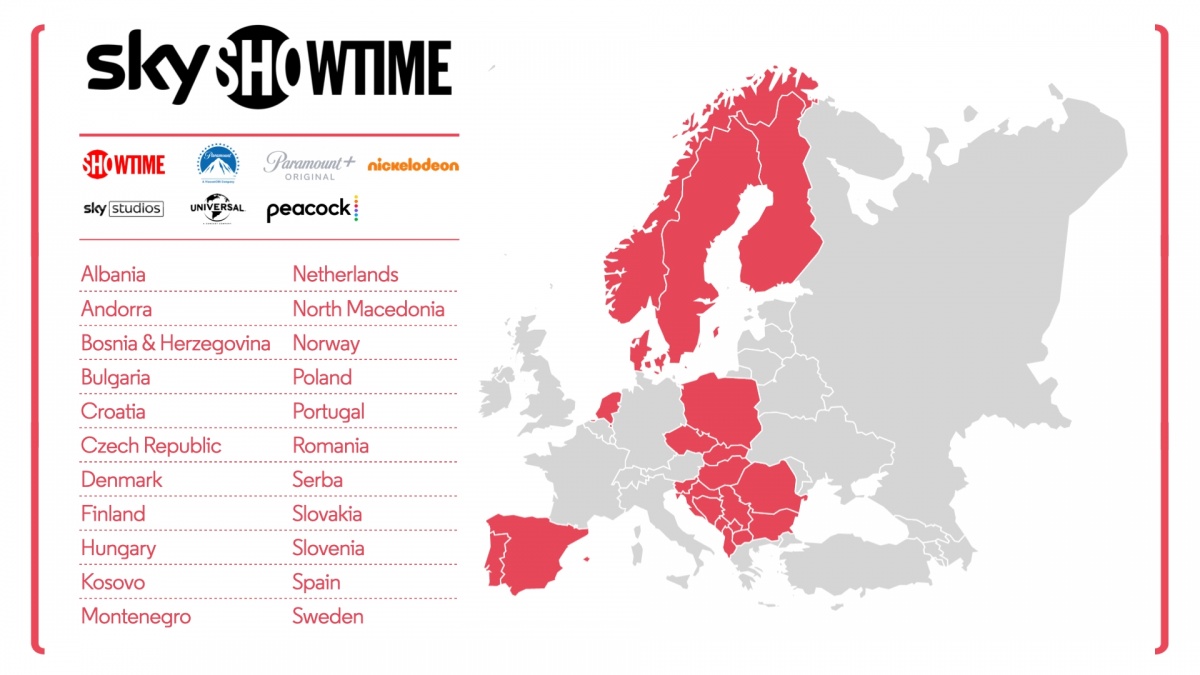 The arrival of Sky Showtime to the Nordics will coincide with the shuttering of ViacomCBS’ Paramount+ service, which relaunched as a stand-alone SVOD service in March this year. Paramount+ in name has been active in the Nordics since 2017, when it initially became available to top tier subscribers of local Pay TV operators as a Set-Top-Box and TV Everywhere service. Since the full independent launch of Paramount+ in March this year, the service has premiered a number of ViacomCBS TV series and a single acquisition from Banijay (Two Weeks to Live - also acquired for Paramount+ outside of Europe in Latin America and Australia). 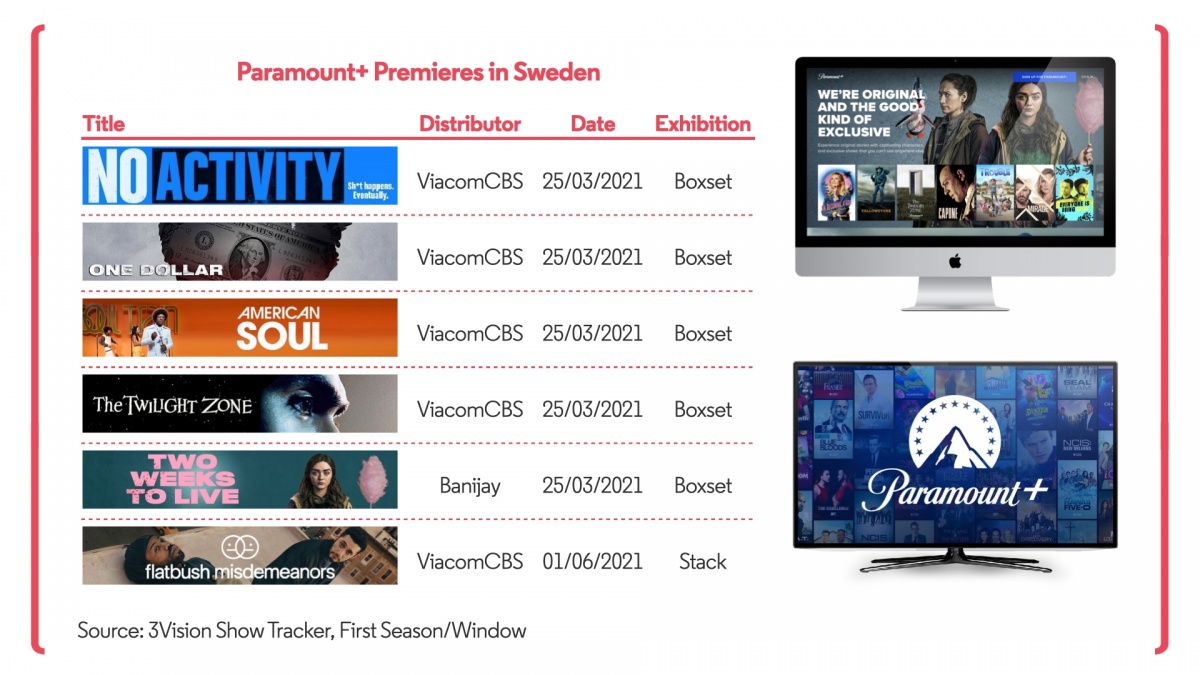 Show Tracker reveals the current European markets where Showtime content is taken by Pay TV services in output deals. In Germany, Italy and the UK the on-going relationship with ViacomCBS has Sky premiere all new content, predominantly on their Sky Atlantic channel. The Telefónica owned Movistar channels are the home of Showtime in Spain, Canal+ the home in France and in Sweden the majority of Showtime content has been acquired by the WarnerMedia owned HBO Nordics SVOD service. 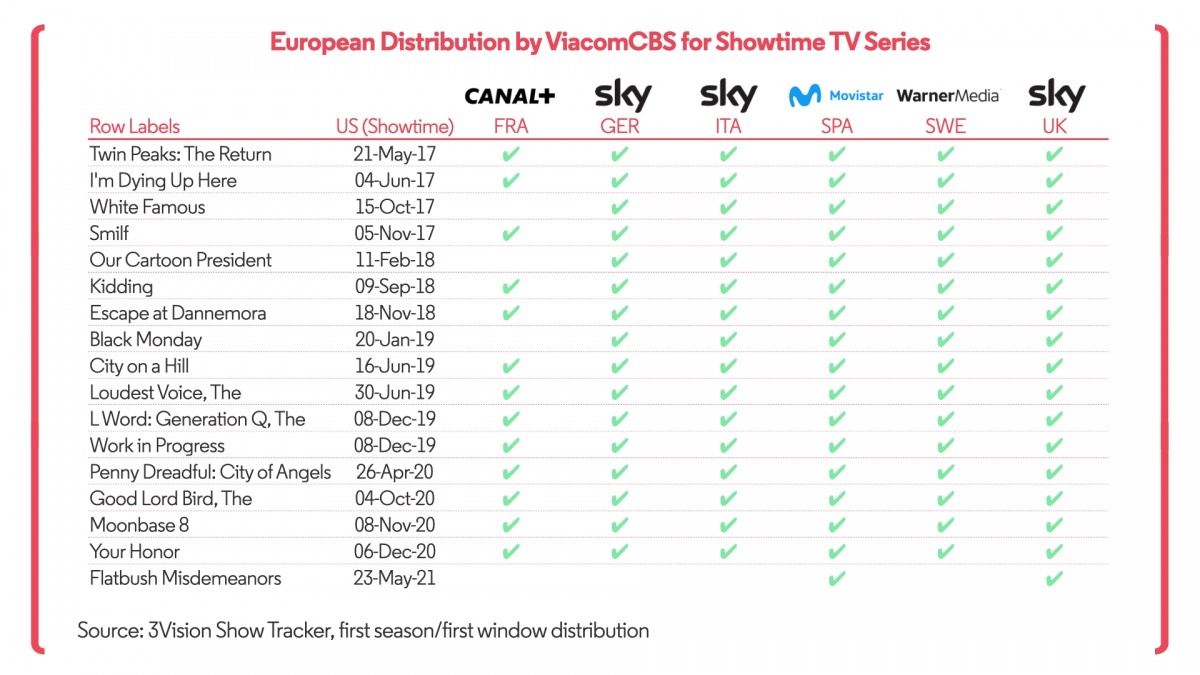 This partnership through ‘Sky Showtime’ creates an immediate distribution route and allows both Comcast and ViacomCBS to enter new markets with a much more competitive proposition, with the content quality and volume to rival the likes of Disney+ and Netflix. Even after the incorporation of Sky’s distribution activity within NBCUniversal’s sales division, there remains Sky Original content that has yet to be sold in European markets. It has proven much more difficult to sell comedy than premium drama overall, with ‘Code 404’, ‘Hitmen’ and ‘Bloods’ having limited market penetration. 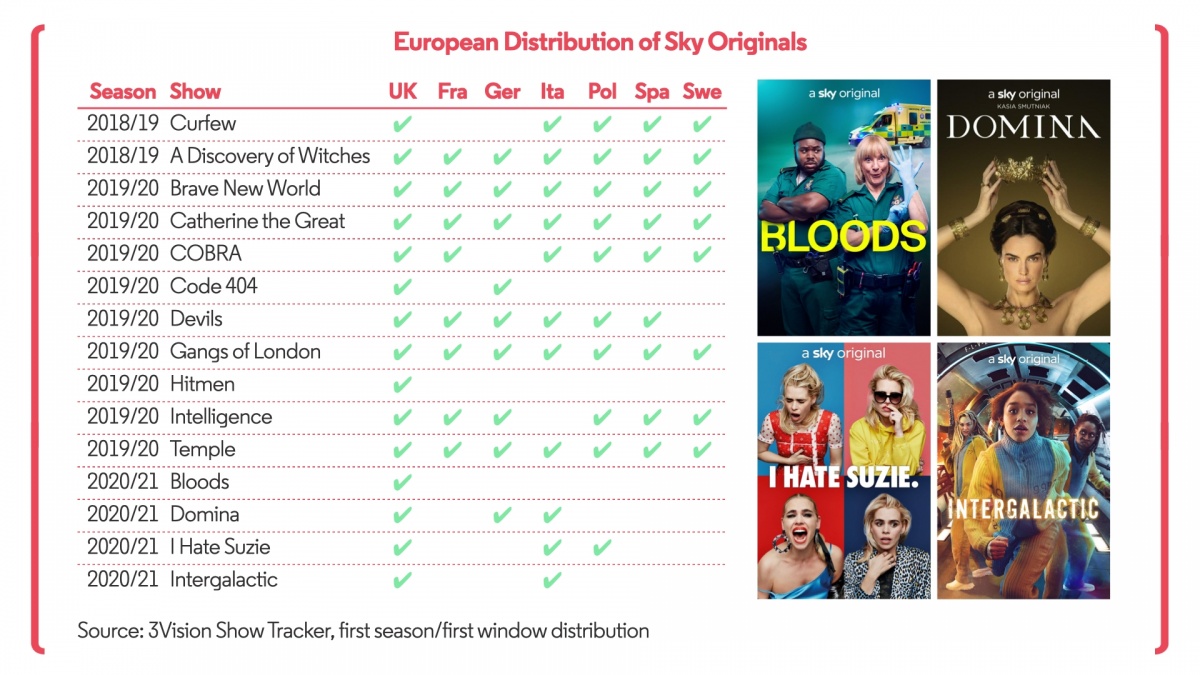 The announcement of ‘Sky Showtime’ followed in relatively quick succession to the global expansion plans for Paramount+, so as of today it is unclear what ViacomCBS will do in the long term with their own independent service in a number of global markets. By joining forces with Comcast, ViacomCBS follow the merger of assets by WarnerMedia and Discovery, as they too prepare to launch a video streaming service of significant scale to compete with the existing market leaders. WarnerMedia has output deals in European markets for HBO content just as ViacomCBS does for Showtime. Existing partnerships with local Pay TV services is dictating the global roll-out plans for HBO Max, with Spain and the Nordics - markets where HBO has an existing strong presence with its own SVOD service - the first European markets for launch.

ViacomCBS may decide that in European TV markets where they have existing Pay TV output deals, that these are lucrative enough to keep for the future. Outside of Europe there are currently no known plans for Sky Showtime and that Paramount+ will remain their main core focus. The inclusion of Showtime content within the Paramount+ service is mixed dependent on the market - in North America it remains outside of the proposition (in Canada Showtime content goes to Crave), but in Latin America Paramount+ is considered the home of Showtime.

We can perhaps expect that the initial 22 markets are likely to be a testing bed for this new service, to gauge the reception from consumers and lead to further discussions on where to target next.