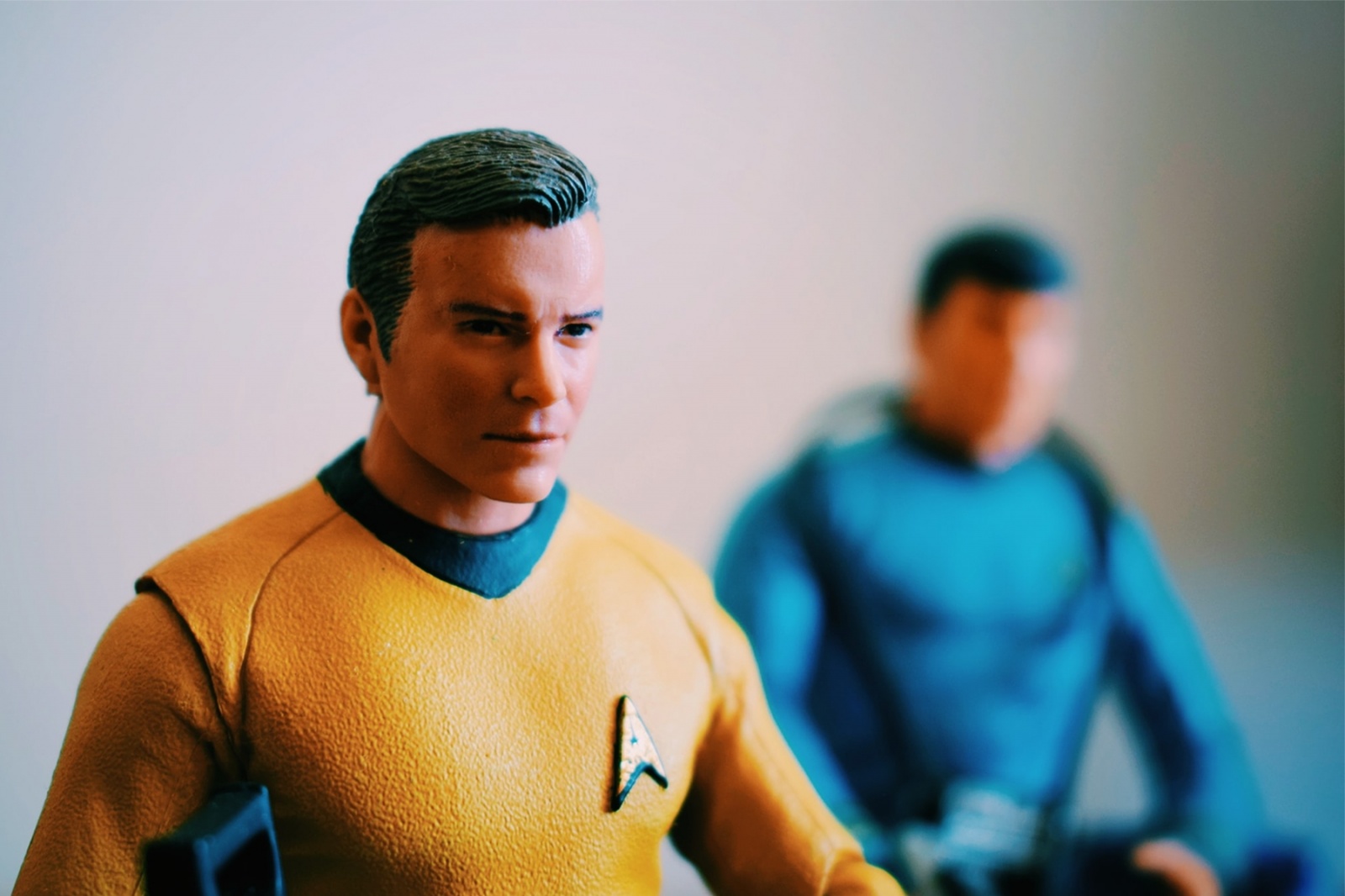 Paramount+ engaging in Vertical Integration less than its SVOD Rivals

The perceived focus from the owner of Paramount+ on its direct-to-consumer activity has been further intensified by the decision to rename the recently merged ViacomCBS to Paramount and Show Tracker reveals that a more unified approach to the SVOD is beginning to take place, even if it is still at a rate less than Paramount’s studio rivals.

Prior to the merger of Viacom and CBS when the SVOD was instead known as CBS All Access, each of its then three markets (US, Canada, Australia) were informed by local pressures such as CBS’ broadcast channels in Australia operating under Ten Networks or its ongoing output deals in Canada.

High profile titles such as ‘Star Trek: Discovery’ and ‘Star Trek: Picard’ were licensed to Netflix and Amazon respectively in all markets outside the US and Canada, further impacting the prevalence of Originals on the SVOD. Its later arrival as Paramount+ in markets such as Latin America and Sweden means that several Paramount+ Originals debuted on other third-party services.

Consistency wasn’t seen in even largely pan-regional markets like Latin America, with two shows that came to the SVOD in Mexico instead being acquired by Globoplay in Brazil, who has continued to grow its acquisition activity. 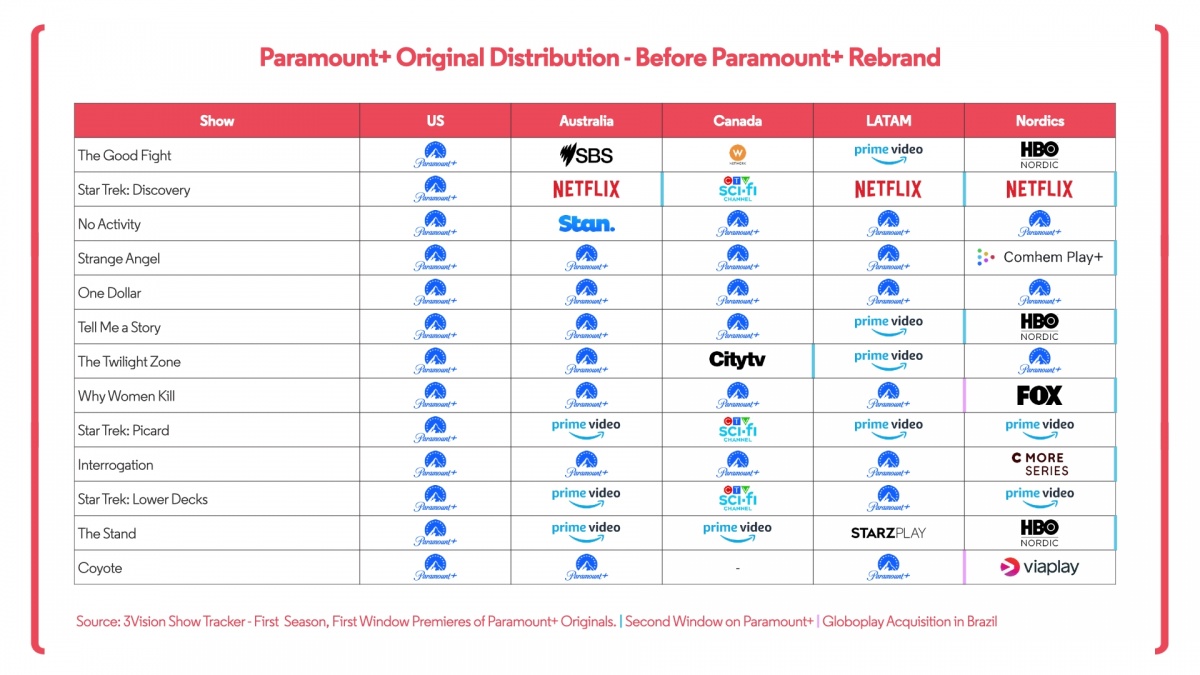 Many of those shows that premiered initially on non Paramount owned services have since gone on to have second windows on Paramount+ where available, the most notable example being ‘Star Trek: Discovery’ which also saw its fourth season be pulled from its previously preordained international home of Netflix for Paramount+ in all markets with the SVOD service and Pluto TV, the Paramount owned AVOD platform, in those without it.

All Paramount+ Originals are distributed by Paramount with the exception of ‘Coyote’ which is being sold by Sony Pictures. This removes any guarantee that the show will come to any version of the SVOD outside the US. In Sweden it has been sold to Viaplay, most likely as part of a longstanding deal between Sony and NENT.

Titles that debuted since the SVOD’s rebrand from CBS All Access to Paramount+ however have thus far instead debuted only on Paramount+ where the service is available, signalling a reprioritisation of Paramount’s SVOD presence outside the US. 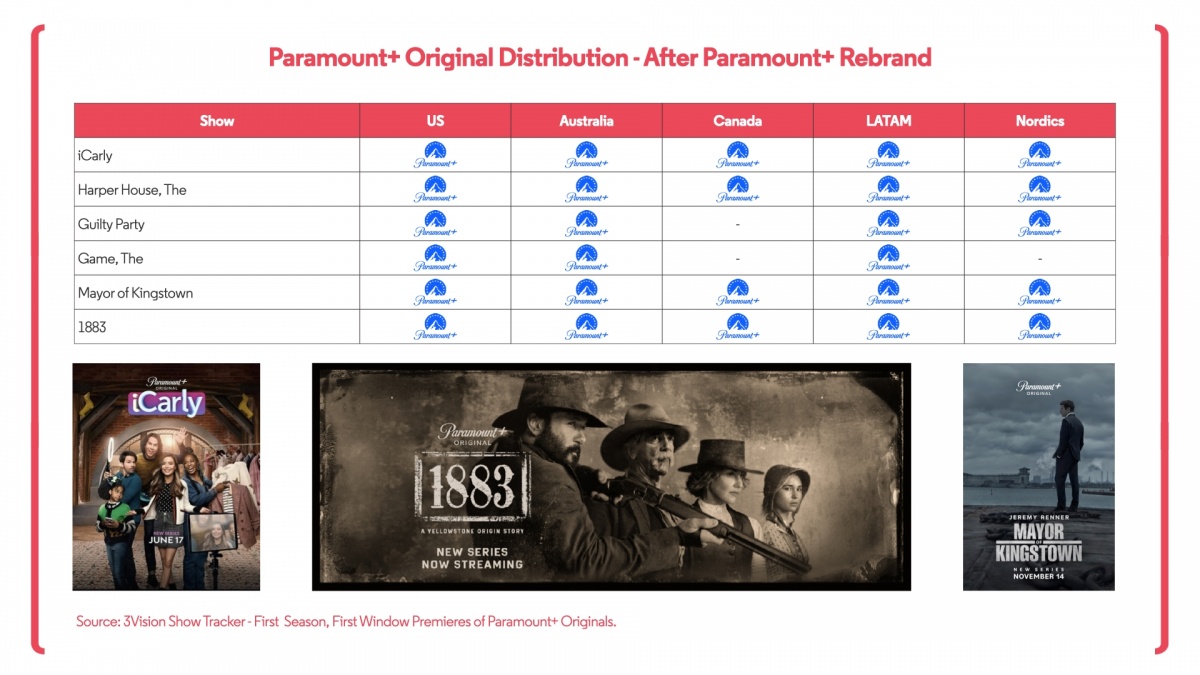 The variance of the SVOD market-to-market does not end with the availability of Paramount+ Originals but other scripted content appearing on the service too. Paramount CEO Bob Bakish downplayed the possibility of Showtime content appearing on the SVOD, arguing the shows are too “coastal” for the broader brand of Paramount+. While Paramount has since decided to offer a bundle of both Showtime and Paramount+ to US subscribers, these TV series are not integrated into the Paramount+ platform, with subscribers instead expected to engage through the long established Showtime On Demand. Showtime TV series however are appearing on both Nordic and Latin American versions of Paramount+, with the latter becoming the home for all new Showtime titles in the region. 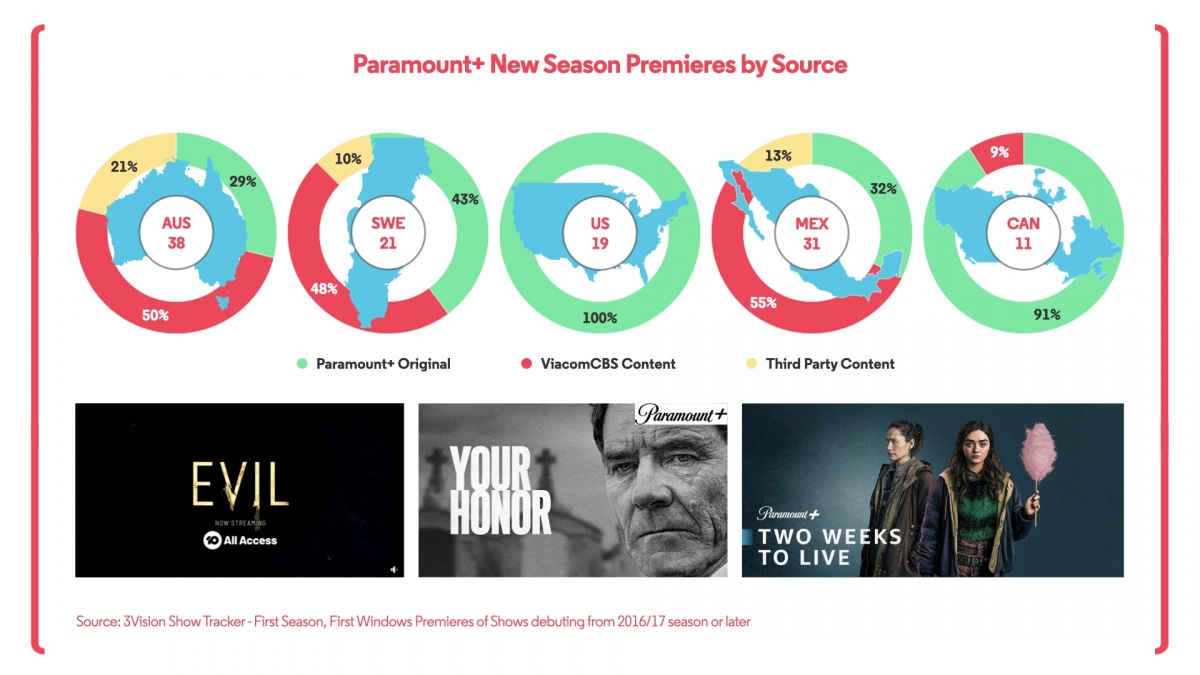 There may be plans for Showtime content to appear directly on the US Paramount+ at some point, but this won’t happen in the near future as Amazon Prime has recently begun airing second windows of some of Showtime’s most prominent shows in the US. While in some markets Paramount+ is supported by other Paramount content in the first window, such as those commissioned by Showtime, there are a number of TV shows that come from third-party distributors.

‘Becoming a God in Central Florida’ is one such title from Sony, but it did originally debut in the US on Showtime. Another title that is separate entirely is ‘Two Weeks to Live’ from Banijay, a Sky Original, that has come to the service in both Latin America and the Nordics, with a premiere in Australia to follow in August. In the US however it what acquired by rival HBO Max and branded a Max Original.

Paramount’s rivals continue to outpace the studio in terms of vertical integration, with Disney adopting a near universal approach internationally and WarnerMedia likely to be doing the same if not for them being held back by long established volume deals. For now Paramount’s biggest markets for this kind of activity is Latin America and Australia, which are in turn supplemented by third party acquisitions.

The studio is set to team up with NBCUniversal, a studio who’s vertical integration activity has largely been limited to originals being swapped between its Peacock AVOD/SVOD in the US and its Sky broadcasting platforms in Europe. Both NBCUniversal and Paramount plan to launch their joint-venture SkyShowtime across most non-Sky European markets in 2022, replacing Paramount+ in the Nordics.

A growth in vertical integration activity from Paramount seems inevitable but perhaps never to the same extent as its main rivals Disney and Warner. Paramount’s openness to cooperate with NBCUniversal for SkyShowtime signals an acknowledgement of the danger of an over fluctuation of SVOD services in the market. In any case, the distributor has a huge catalogue that can accommodate both a digital original pipeline as well as additional TV series they can sell to third party services internationally, who may be willing to pay more for their titles as D2C continues to challenge their historical pipelines of US content.