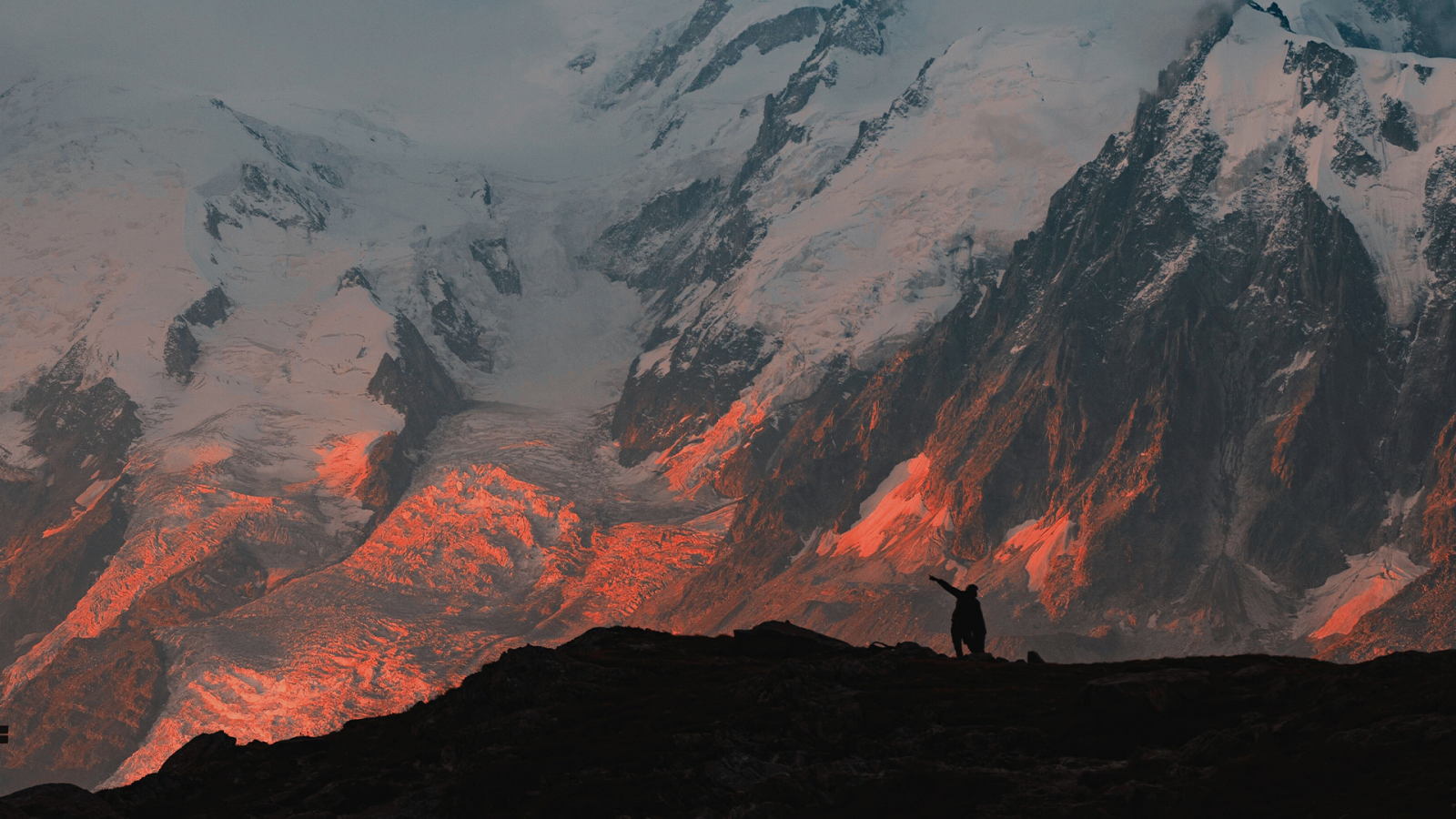 Book-to-movie adaptations have become immensely popular in recent years, with two of the most popular shows in the world right now being literary adaptations. Amazon Prime’s ‘The Lord of the Rings: The Rings of Power' and HBO’s ‘House of the Dragon’ have had record-breaking openings in terms of viewership, with the former having more than 25 million global views on it’s first day and the latter having more than 10 million viewers for its first episode (Making it HBO’s biggest premiere ever). Although both shows are prequel/spin-off’s of hugely popular media franchises they are backed by a community of fans that have existed for many years prior thanks to their source material.

The popularity of book adaptations started with the success of ‘The Lord of the Rings’ trilogy, making it possible for shows like ‘Game of Thrones' to be made with huge budgets and high production quality which had never been seen before in television. Although the phrase “the book was better” has become quite popular among source material fans, especially after the disastrous final season of Game of Thrones, it hasn’t stopped studios from marching full steam ahead into adapting as many books as possible.

Show Tracker reveals that this popularity has only increased, as the number of shows adapted from books has grown steadily since the 2016/17 season, reaching new heights in the past few years. Book adaptations are now at the highest they’ve ever been for both SVOD originals and regular shows. Netflix can be hugely attributed for this boom as starting from the year 2016 onwards, over 25% of their original shows have been book adaptations. The same can be said about original shows from both Amazon Prime and Apple TV+, with Disney+ being the only exception as the service heavily focuses on their comic book adaptations from the MCU and spin-off/sequel shows to popular Disney-owned film franchises such as ‘Star Wars’. 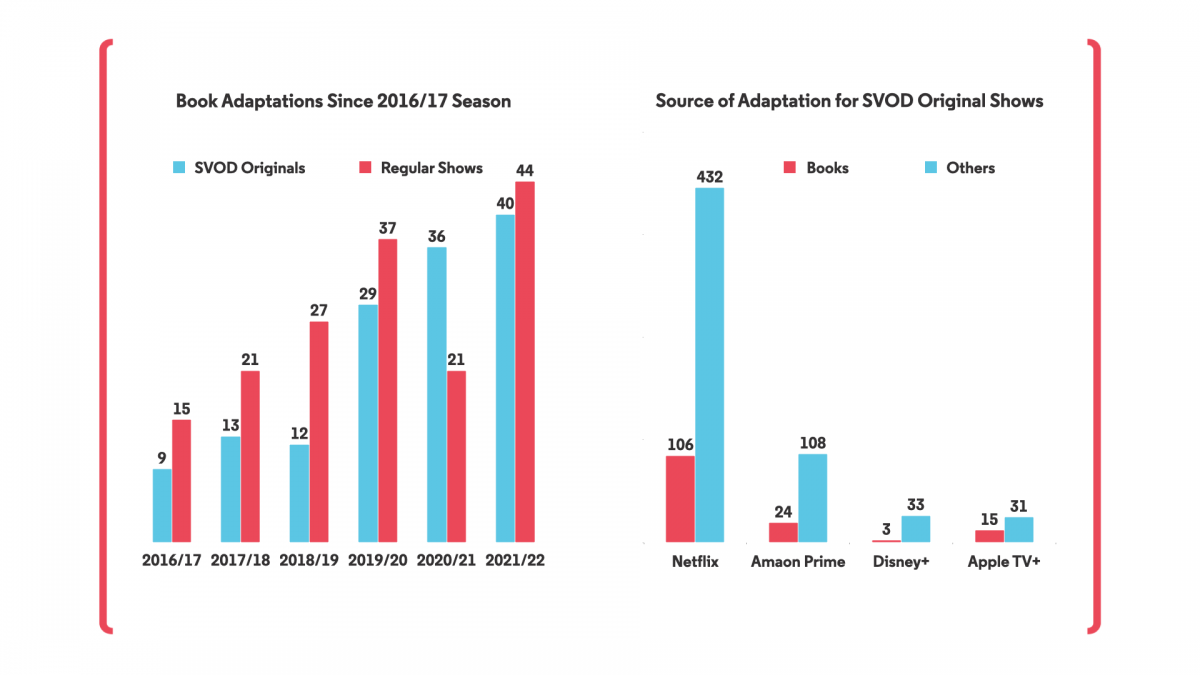 Netflix has always realised the potential of book adaptations as it currently has over 70% of the SVOD original shows adapted from books and it is logical to assume that material with a significant fan base is a great way to generate some buzz around its release. But the issue lies with Netflix’s pessimistic approach to renewal. They are quick to cancel any show that doesn’t meet their high expectations of engagement, and unfortunately a lot of book adaptations such as ‘Altered Carbon’, ‘Cursed’, and ‘First Kill’ have been cancelled after one or two seasons.

But if we break down the adaptations for shows that have aired since the 2016/17 season using Show Tracker, it is quite apparent that book adaptations are one of the most popular accounting for almost 1/4th of the total number of shows. This number is expected to grow more in the upcoming years as studios are keen on more high-profile book adaptations as announcements of such adaptations generate a lot of excitement on social media from the existing fan community, the recent announcement of the ‘Percy Jackson & the Olympians’ Disney+ Series is an example of an existing fan community showing support for a show months ahead of its potential release. 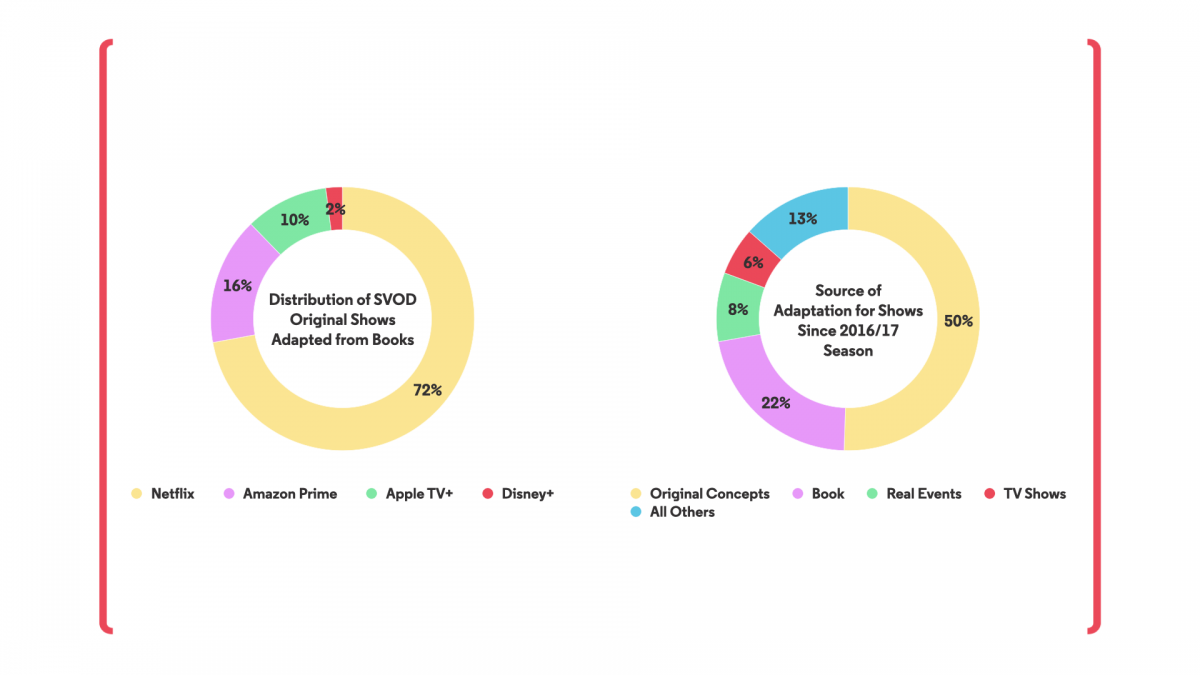 Book adaptations are on the rise, and studios are willing to develop faithful adaptations with little to no production limitations as long as the source material they’re adapting has a huge surrounding fan base. There is no better example of this than Amazon Prime’s ‘The Lord of the Rings’ show. With each episode having an estimated $ 58 Million budget it is the most expensive show ever made and the first season far exceeds the budget of ‘The Lord of the Rings’ trilogy combined. Although HBO took a hit with the final season of ‘Game of Thrones’, the first season of ‘House of the Dragon’ has a budget of around $ 200 Million which is more than twice the budget of the most expensive season of ‘Game of Thrones’. This reveals how far studios are willing to go for source material that they truly believe has the potential. Logically speaking, adapting books with strong community backing is a much safer bet for studios as spending millions on unknown original concepts such as a Squid Game is always a riskier decision.