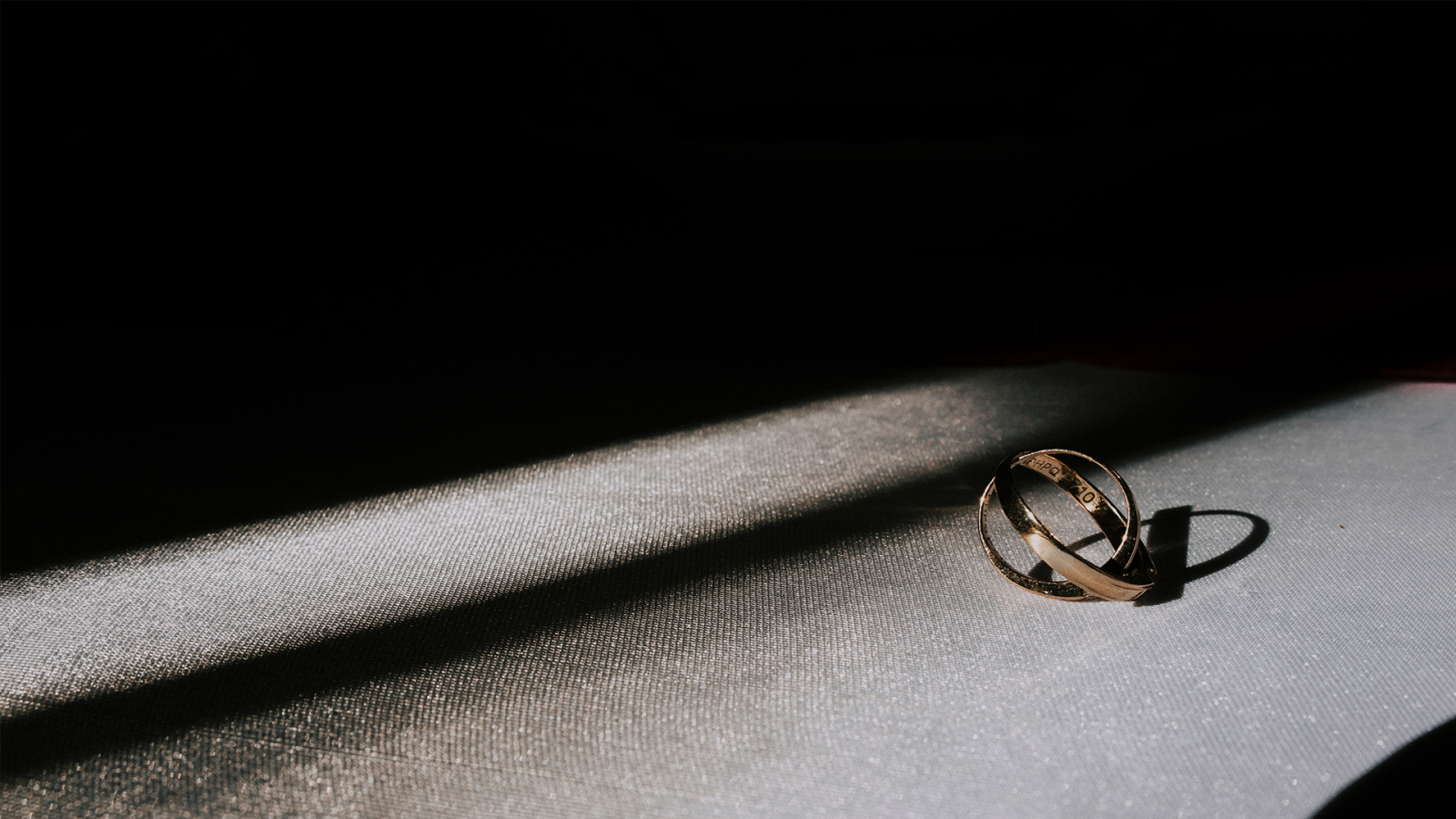 Two long-awaited fan favourite fantasy series have launched within a fortnight of each other - ‘House of the Dragon’ on HBO (and of course HBO Max) and ‘The Lord of the Rings: The Rings of Power’ on Amazon Prime. It only took HBO two days following its premiere to renew the ‘House of the Dragon’ for a second season, but Amazon Prime has been even bolder - confirming five seasons of ’Rings of Power’ before even its first episode had launched on Amazon Prime.

Whether a show is a hit will always involve some level of rolling the dice, with some commissions inevitably destined to be cancelled when they do not perform well. Show Tracker reveals that in the case of Netflix this is, unfortunately, a common occurrence. While it is expected that the sheer number of new commissions coming from the SVOD over the years would result in more cancellations, 28% of Netflix Originals that have debuted since the 2018/19 season have since been cancelled, a higher proportion than any other US SVOD service. 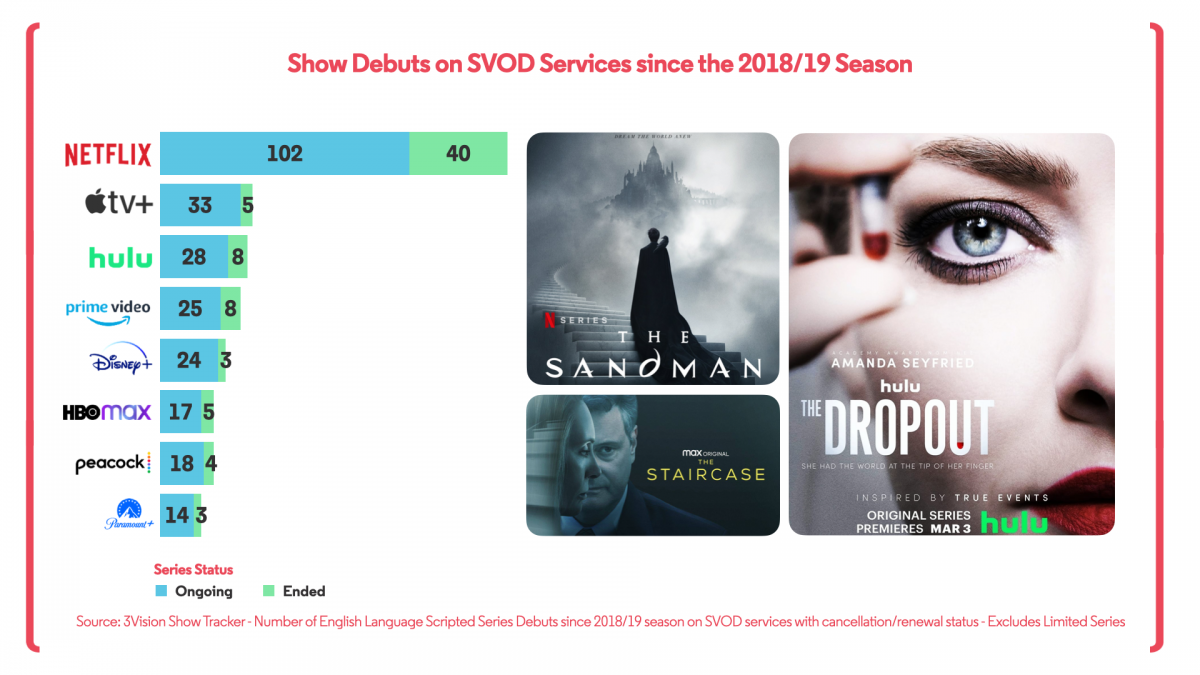 The demands for engagement from Netflix are exceptionally high for a renewal to be achieved, particularly if it is an expensive production. A recent example of this is ‘The Sandman’, a Netflix Original produced by Warner Bros. based on the comic series by Neil Gaiman. Despite achieving over a billion minutes of viewing time in the first three days following its premiere on August 5th, as well as a second run as the top streamed show of the week when its bonus episode was released two weeks later, the show’s renewal has yet to be announced by Netflix and is at present not a sure thing. Its original creator and executive producer Neil Gaiman has confirmed that the show’s high budget means the title requires even greater success than what has been reported so far for Netflix to warrant its continuation.

When breaking down further how long these cancelled series lasted before meeting their end, it is quite clear how callous the likes of Netflix, and to a smaller extent Amazon, can be with their cancellations, with an overwhelming proportion of series being cancelled after only one season. 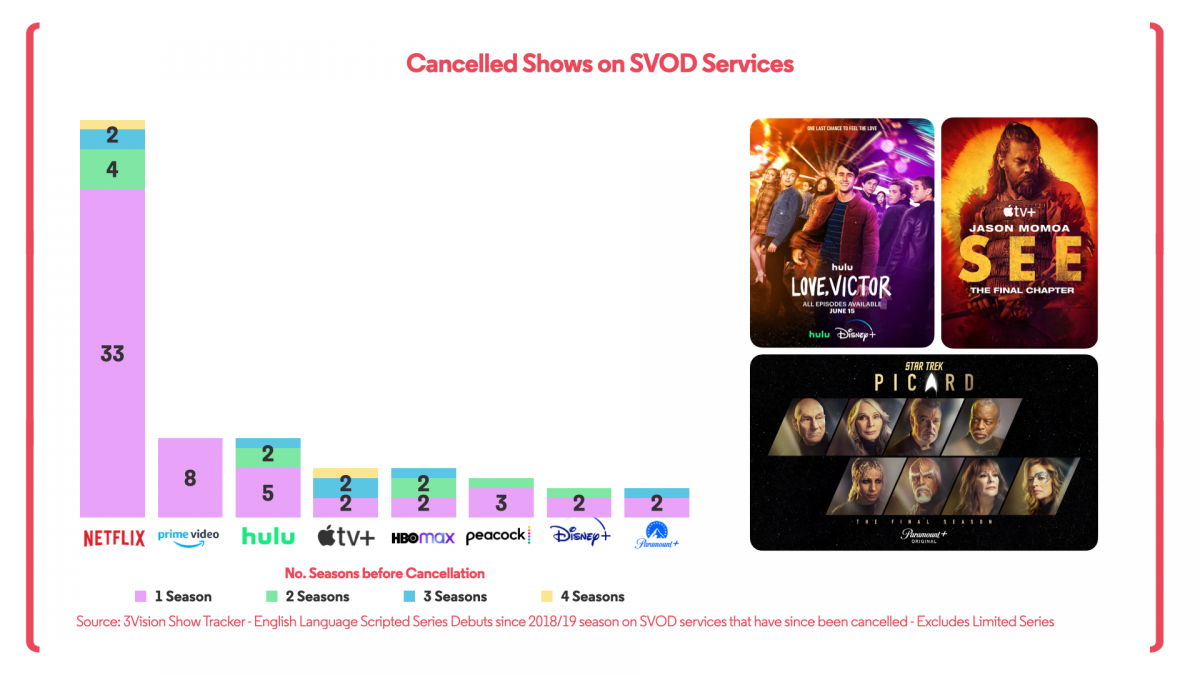 Even with the exclusion of limited-series designed to have just one season, Netflix’s cancelled slate still includes 33 series that never got renewed. Ironically limited series such as ‘Squid Game’ can garner a previously unplanned second season provided they achieve monumental success in the eyes of Netflix.

Netflix continues to commission series based off beloved fan works - whether comic adaptations like ‘The Sandman’, anime adaptations like ‘Cowboy Bebop’ or movie adaptations like ‘The Dark Crystal’, only to cancel them when they launch with a poor performance. Even shows that are critically lauded aren’t safe from Netflix’s won determination of what is, or more importantly is not, a success. It’s enough that these often fervent fan bases are starting to notice a pattern within Netflix’s cancellation strategy.

In comparison, HBO seems ready to commit to ‘House of the Dragon’ after its strong early showing and Amazon clearly has the faith in its own ‘Rings of Power’ to confirm five whole seasons to its service, no doubt providing some measure of a sigh of relief to ardent fans worried about committing time to a series that won’t get the chance to end gracefully.

As Netflix re-evaluates its content approach for the future, producing less originals over all but with much more consideration, it can be expected that as a result there will be far less cancellations of projects and more commitment to a series’ future. New original series can make headlines, bring in users and reduce churn but returning series such as ‘Stranger Things’ continues to boost the service as fans remain eager to see what happens next in the world that the show has created.