This week we take a look at the buyers in each of our Show Tracker markets from the 2016/17 season onwards, to see who has bought the most US scripted drama out of all the existing Free, Pay TV channels and VOD services. Netflix and Amazon are excluded from this analysis. 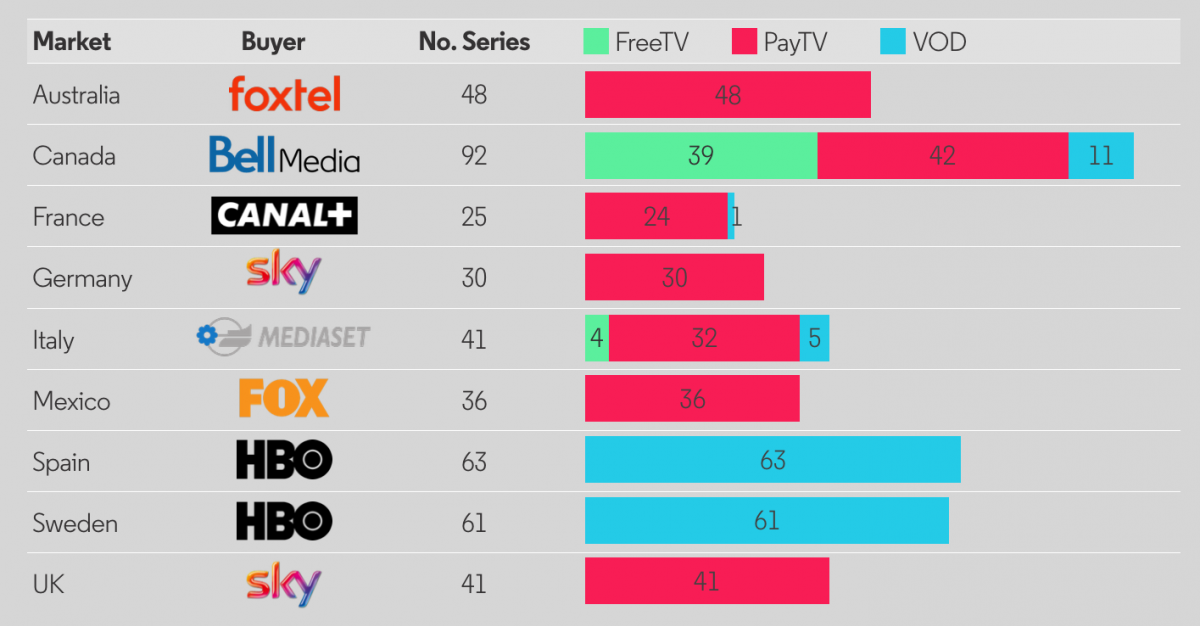 A fully Pay TV focussed group is the leading buyer in 4 Show Tracker markets – Australia (Foxtel), Germany (Sky), Mexico (Fox) and the UK (Sky). In France Canal+ has acquired content predominantly for its suite of Pay TV channels (Canal+/Canal+ Series/Polar+) but are experimenting with their release strategies, choosing to launch Sony’s Deadly Class exclusively on their MyCanal streaming service in April ‘19.

In some cases, the acquisitions for these Pay TV channels are as a direct result of an output deal between the channel group and distributor - Canal+ with Fox in France, Sky with HBO and Showtime in the UK and Germany, for example.

In Australia Foxtel have acquired 48 first windows for a new series in this 3 year period, with the channels Fox Showcase and Fox8 leading the way with 28 and 18 respectively. Nine Entertainment run a close second in Australia with 46 acquisitions, 10 for their Free TV channel (Nine) and 36 for the streaming platform Stan. Stan began life as a joint venture between Nine Entertainment and Fairfax Media, who were eventually bought by Nine in 2018.

The 36 series acquired by Stan come from a number of distributors including CBS, Lionsgate and Turner. An SVOD platform is the most active buyer in both Spain and Sweden where HBO have a stronghold on the US scripted drama market, with around 60 first window acquisitions by HBO España and HBO Nordic over the past 3 years.

Emerging SVOD platforms are likely to become even more competitive over time for new content – Lionsgate have in recent months increased the rollout of their Starzplay streaming service as far afield as Mexico, Argentina, France and India, offering not only content from its affiliated distribution channel, but also from the likes of NBCU (‘The Act’) and Endeavor (‘Killing Eve’).

Bell Media are the single largest buyer of US scripted content in all Show Tracker markets, with 92 new series spread across its range of Free, Pay TV channels and SVOD service (Crave). Bell has an exclusive content deal with Showtime and a long-term licensing agreement with HBO.

Bell have acquired 35 new US scripted dramas for CTV, a number matched by Corus for their own Free TV Channel Global TV, which has shown 36 new shows since the start of the 2016/17 season. This is largely through existing deals with CBS and NBCU, where the channel mirrors some of the output of the US broadcast network. With CBS already pushing its own branded streaming service into Canada (CBS All Access) and NBCU’s global plans still to be revealed, the nature of future deals for Global TV is unknown.