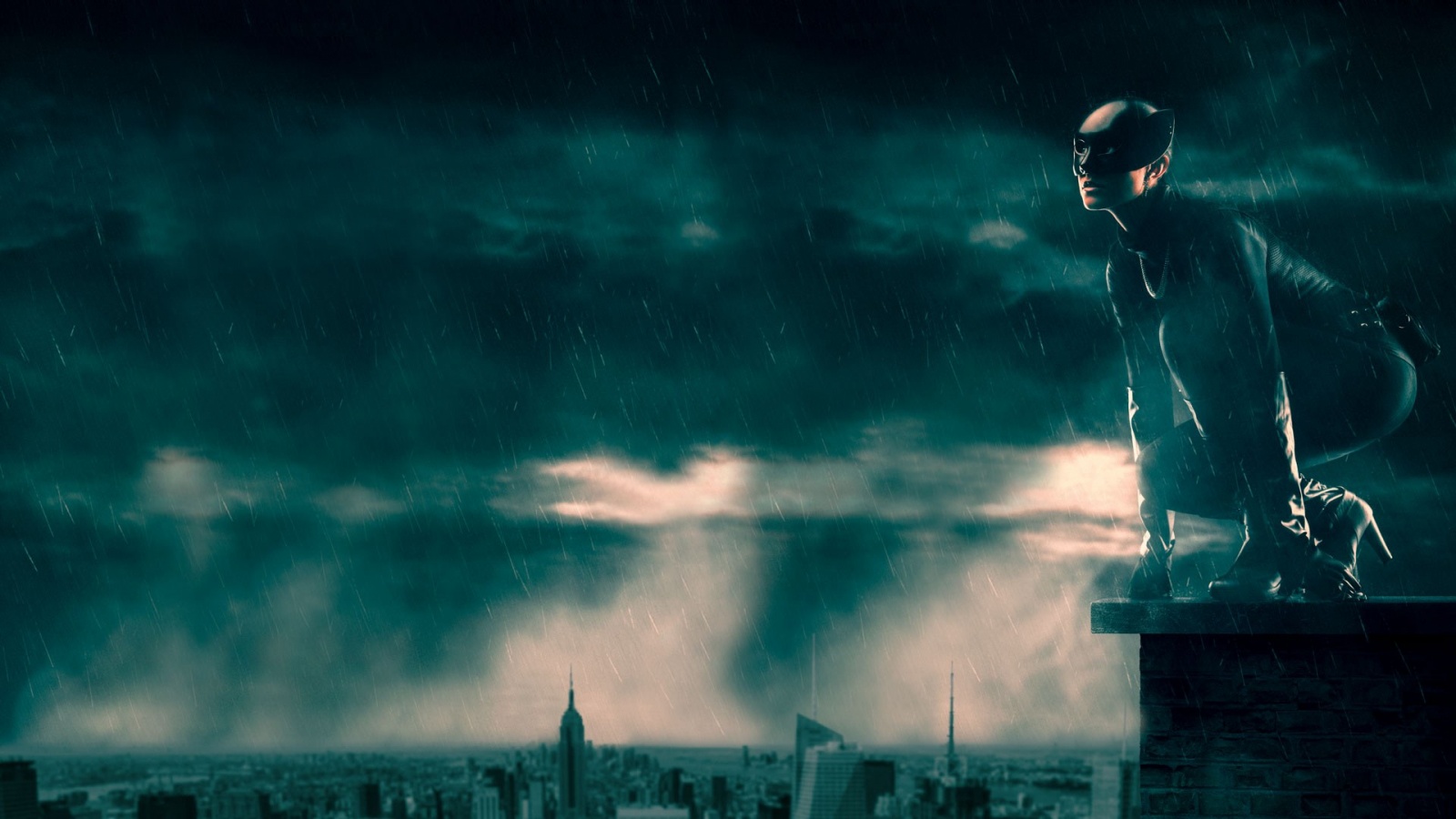 How To Acquire Movies on Demand with a Spotlight on PVOD 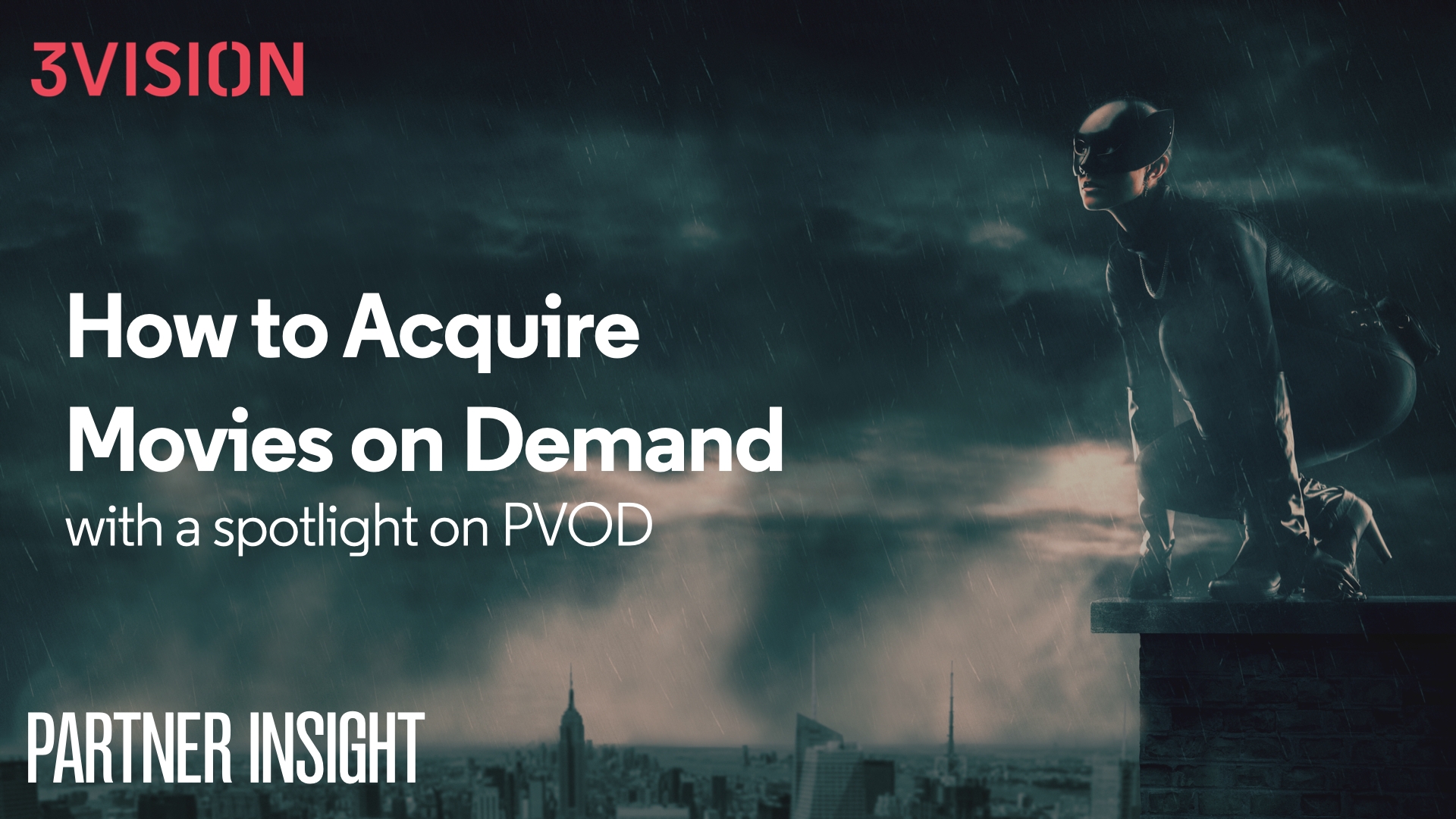 The TV landscape is rapidly changing and this means increasing levels of complexity when it comes to acquiring TV and film content. Today we are looking at how to acquire movies on demand with a spotlight on premium video on demand.

There are currently established licensing structure between Operators and Distributors for providing movies on demand . Typically these are split in two key ways, TVOD and EST.

This is where films are available to rent usually for 48 hours. These films are normally available about three months after their release at the cinema.

The business model for Service providers is a revenue share, one with 70% typically going to the studio and they also have to pay a minimum guarantee.

Deals are done on an output basis meaning you have to commit to taking all new releases making cherry picking impossible. 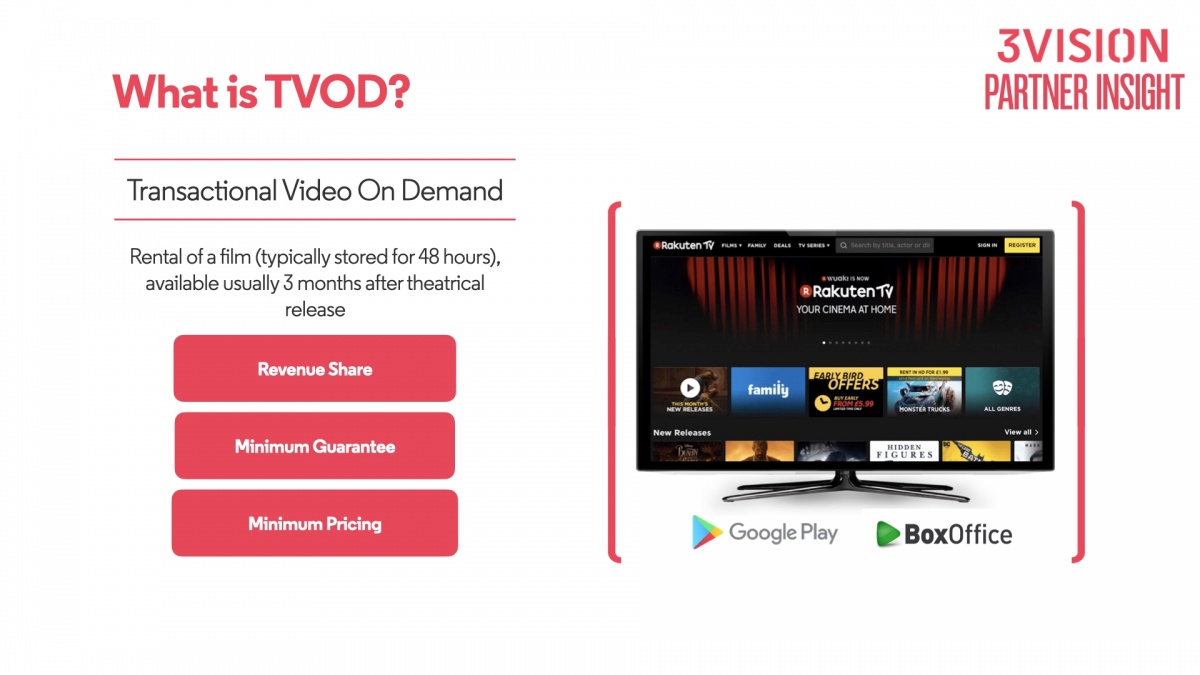 This is where a film is available to be bought and kept digitally. In this case titles can be made available to a service provider as early as the day after its theatrical release.

The business model is generally a wholesale one, where the service provider buys the title for a fixed price from the studio, with discounts available if you commit to buying large volumes. 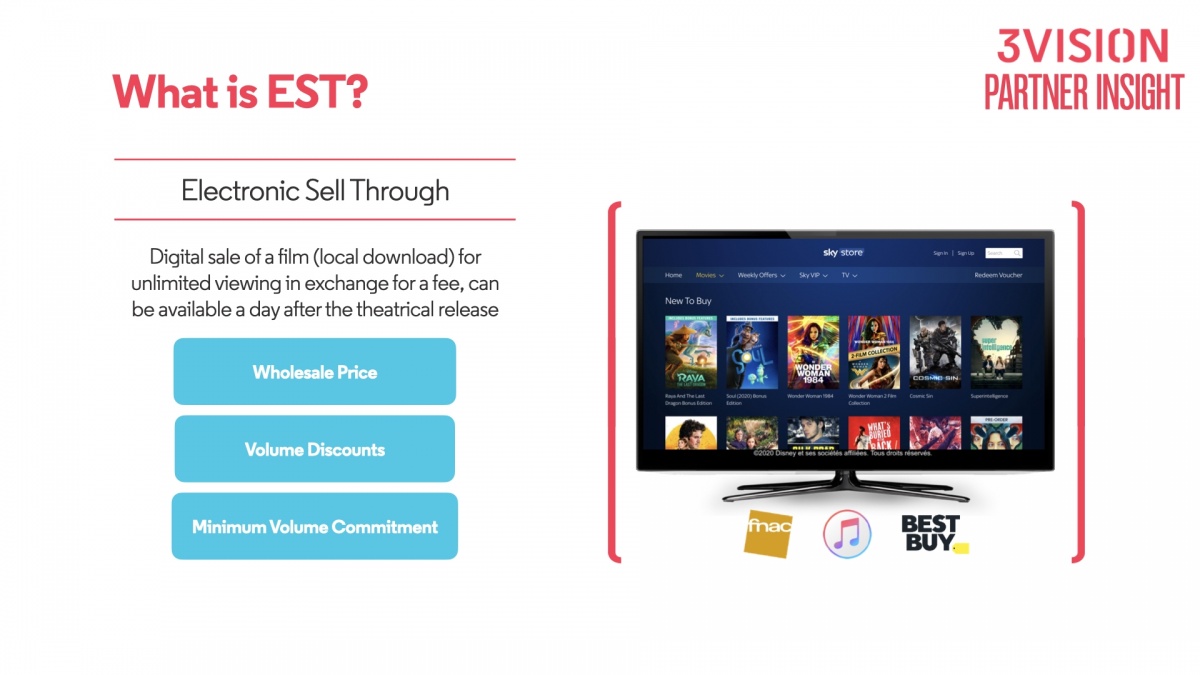 We are often asked by our clients if they can have movies quicker than what is currently offered and even simultaneously with theatrical release. For many years, this would have been unlikely as the release of movies is governed by something called the ‘windowing system’. This is well established and helps the Studios to extract the most value out a film.

However, the Pandemic has accelerated the development of PVOD. This is taking various forms but typically it’s allowing consumers to access a movie at home on their TV at the same time that it is in the Cinema.

The Business model is the same as TVOD – with a revenue share and Minimum Guarantee but the revenue share to the content owner is typically higher at 80% and the price point is also higher. 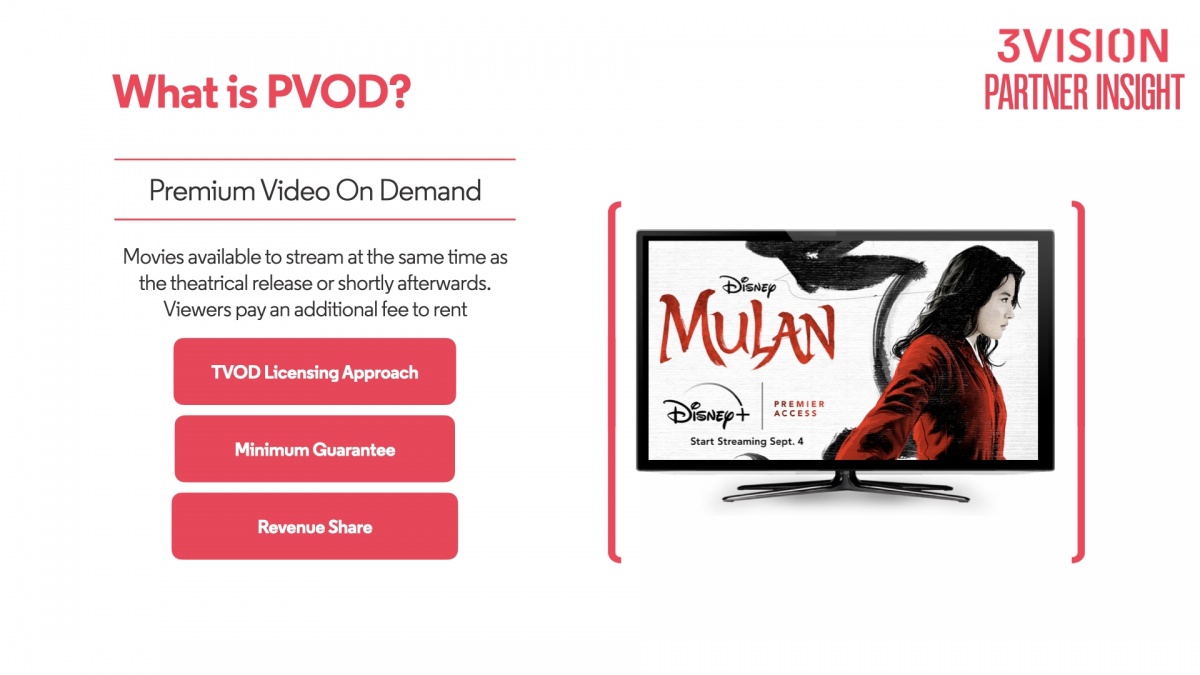 We’ve seen a few high profile examples of “PVOD”. NBCUniversal were one of the first with Trolls at the outset of the Pandemic but is PVOD something that is now available today to operators?

It’s a very mixed approach currently with no clear Studio Strategy. With cinemas closed, the Pandemic accelerated Studio experimentation out of necessity, and the results are showing that there is a place for PVOD although perhaps not for all films.

Last year ‘Mulan’ was released exclusively on Disney+ - the subscription service. Consumers were required to be a Disney+ subscriber and then pay a one-off fee to watch Mulan. Later in the year ‘Soul’ was released via Disney+ for no additional fee. And it has been decided that the Pixar film ‘Luca’ will be released in the same way this summer. We are terming this ‘straight to SVOD’.

Disney’s CEO has indicated that this new model might be here to stay for the long-run. But with Disney’s focus on Disney+ and D2C it’s not surprising. If operators want to offer Disney content to their customers, they will need to integrate with the Disney+ OTT service.

WarnerMedia recently came under fire when they announced that they would simultaneously release titles in the US in theatres and on HBO Max during 2021. But they have recently secured deals with theatres for 2022, albeit with a shortened window to about 45 days.

We spoke with MGM on our podcast Inside Content and they were very clear that they see a hybrid approach to PVOD – with some titles likely to have a simultaneous release in cinemas and on PVOD - with others following a more normal staggered approach. 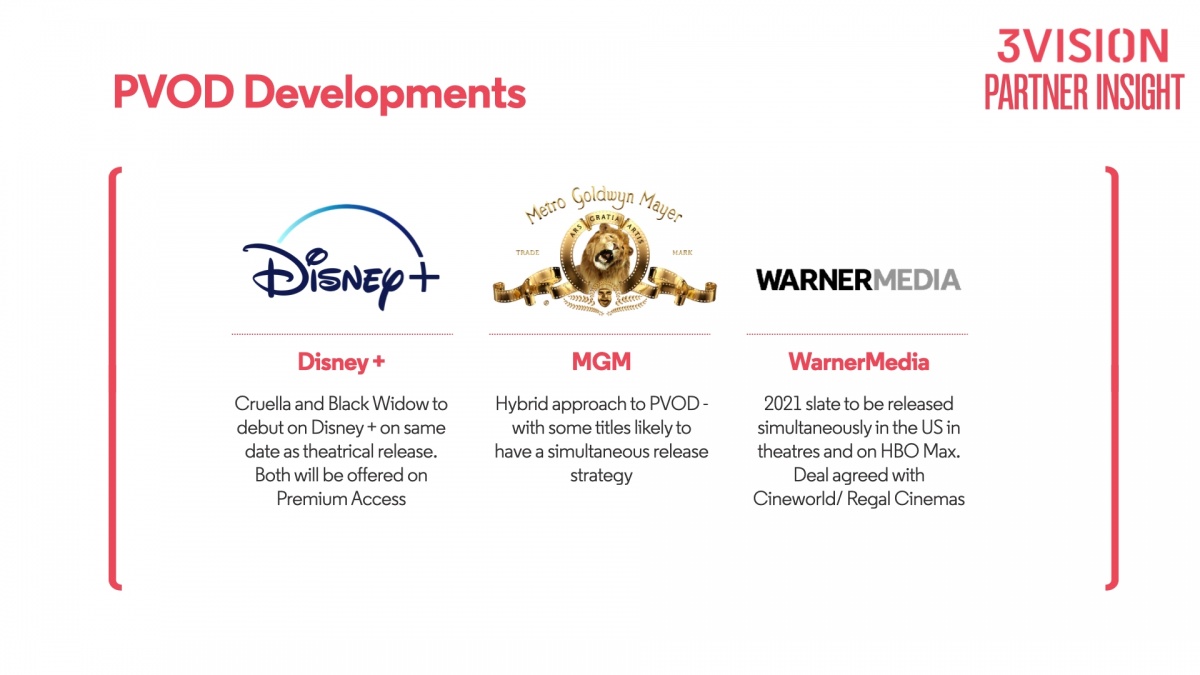 Want to discuss the latest developments for licensing on a PVOD basis or content acquisition for your platform? Get in touch today

Watch the latest episodes in our Partner Insights Series:

The 3Vision Partner Insight Series is designed to deliver the latest in content acquisition licensing, providing you with key intel to support your client conversations around launching and improving video services. 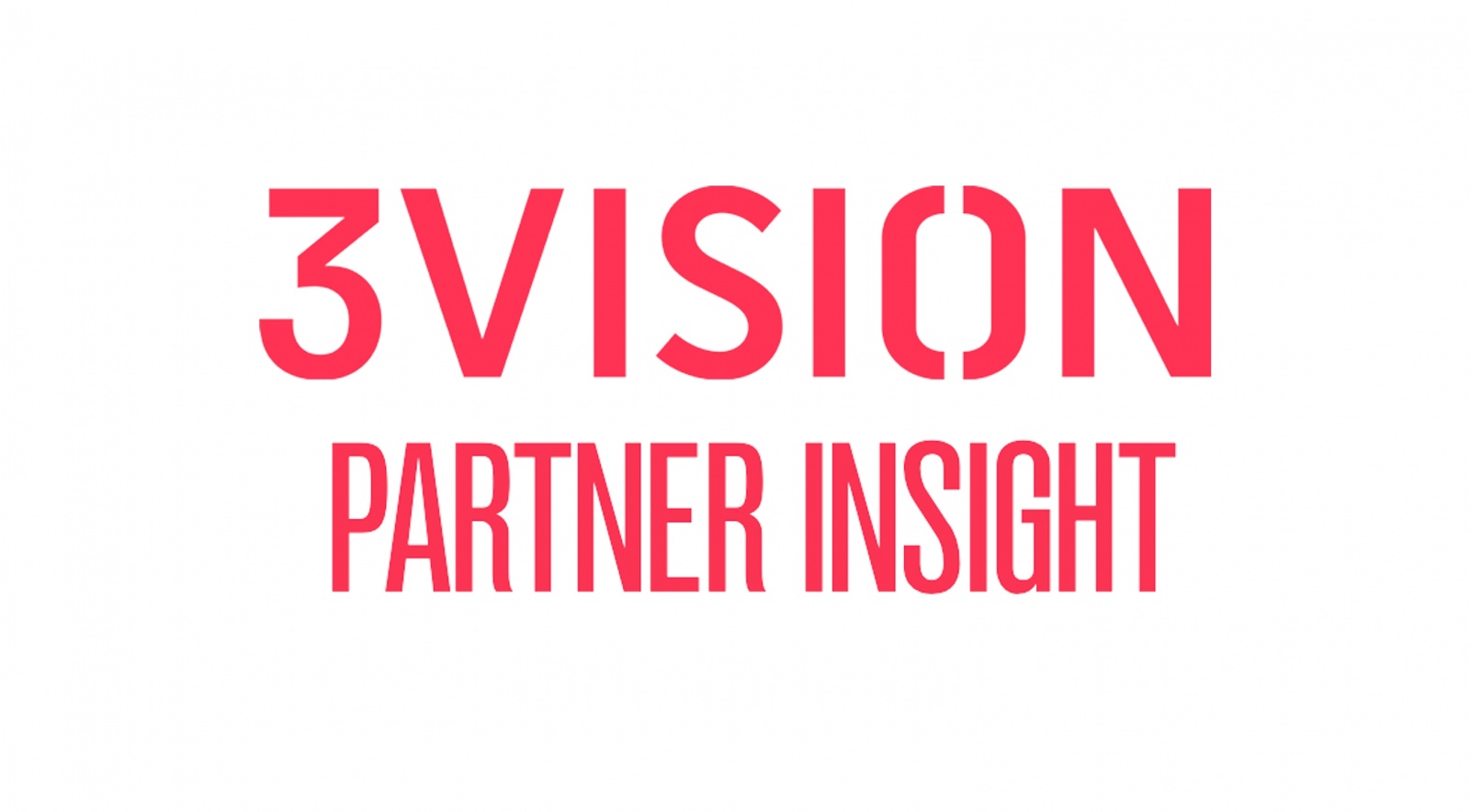 3Vision produced the TV Export Report for Pact, capturing how much value UK content has overseas.