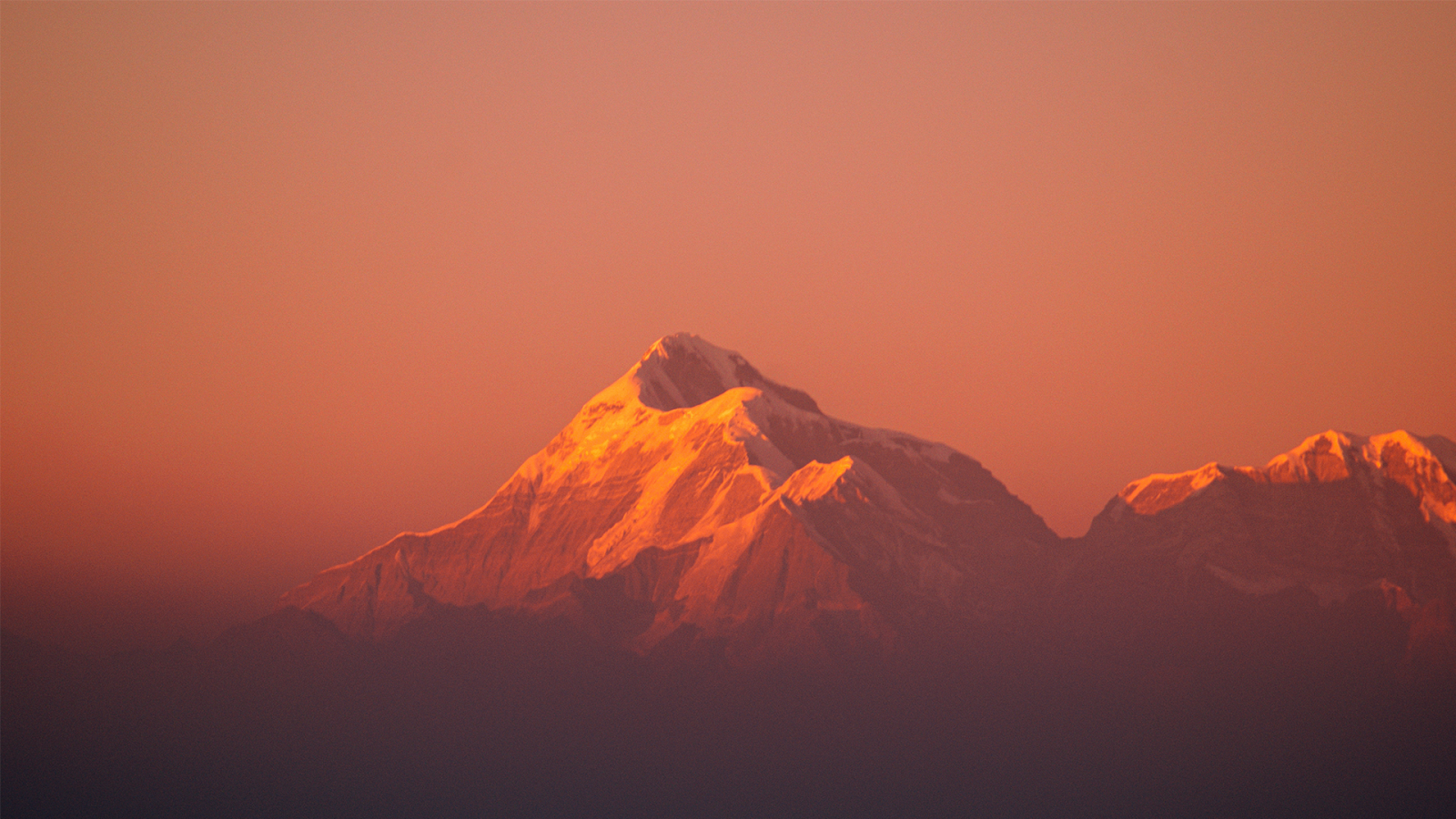 Amazon Prime Continues its Success in the Indian Market

When the pandemic started in March 2020 and showed little to no signs of stopping, local producers in India rushed to salvage as much as they could, signing deals to exclusively release a large majority of their held-back content on popular VOD streaming services such as Amazon Prime and Disney+ Hotstar. This sudden influx of content made those still reliant on traditional methods of consumption such as the Cinema and Pay-TV discover a whole new section of content from many different countries across the world. During this period it is estimated that there was a 50-60% increase in subscribers to these VOD services in India as compared to the Pre-Covid years and upwards of 20 new VOD streaming services were introduced in the market.

Amazon Prime Video India pioneered this transformation, successfully obtaining the exclusive rights to many top Indian movies that were postponed and used it to push their platform to many first-time users. They also recently announced that 41 new original local tiles (TV Shows and Movies) will be coming to the platform over the next two years along with a TVOD movie rental service.

This move by Prime Video India comes as a result of forecasts estimating that the VOD market in India is expected to grow to almost 7 Billion USD by 2027 with almost 200 million subscribers and 12.1% of unique households penetrated. Amazon has also prepared itself for the rollout of 5G in the region (Which is sure to increase the number of people accessing content through their smartphones) by offering yearly subscriptions at a lower price (Half Price to be exact) for mobile-only users.

On the content side of things, Prime Video India has started to push to increase its local and International content catalogue to get ahead of Disney+ Hotstar, who continue to dominate the region in terms of content acquisition and subscribers. Competitng against other services in the region such as Voot and Zee 5, who have large amounts of local content has also proven to be a challenge. But with 22 out of the 40 new titles set to be original local language scripted shows (on top of the 34 existing local original scripted shows), they are set to have one of the biggest catalogues of original local content in the market.

In terms of acquiring 3rd party English language content, Amazon Prime have had the second most number of premieres from 2018 to 2022 only behind Disney+ Hotstar which have consistently had over 25 premieres since 2019. Lionsgate Play, Sony Liv and Voot have all had their most number of 3rd party English language show premieres in 2021, and Netflix has remained almost invisible in the acquisitions market with 11 premieres in 2020 being their highest. While all these services have seemed to slowed down this year, Amazon Prime and Disney+ Hotstar remain outliers as they have peaked with 26 and 44 premieres respectively in 2022. 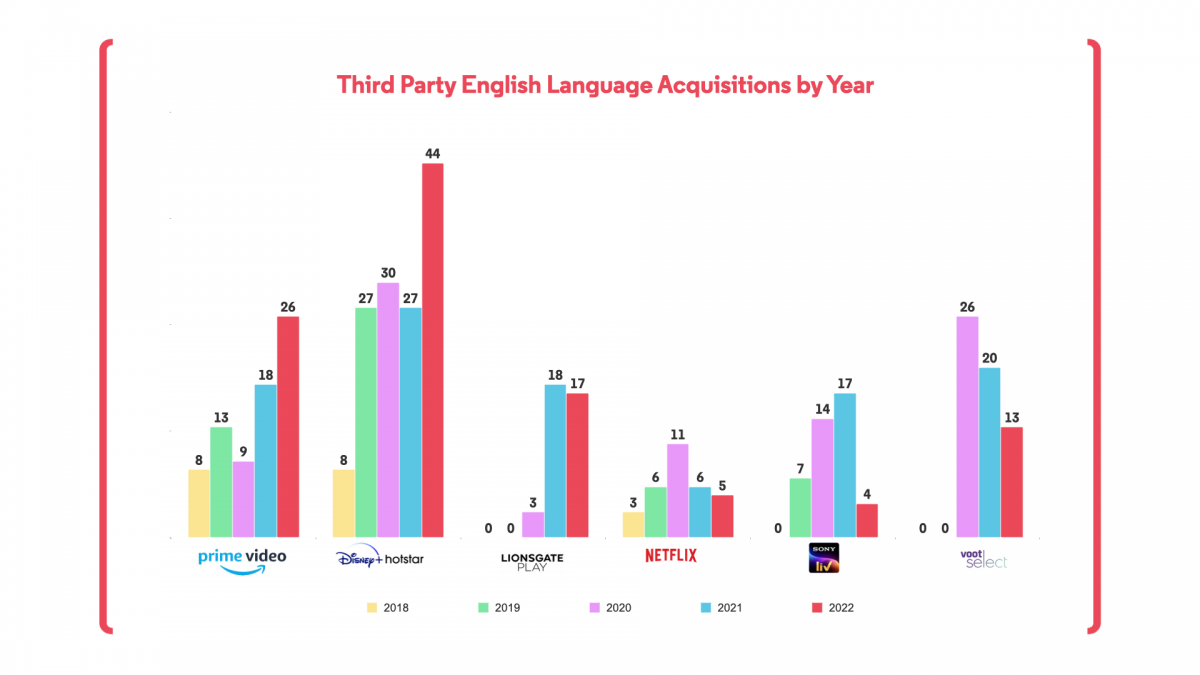 While most HBO Originals shows such as 'House of the Dragon' are still firmly in the hands of Disney+ Hotstar (30% of their English language premieres in the region are HBO Shows) and with Warner Bros. Discovery now starting to focus their attention on building the HBO Max platform, a lot of the original shows meant for HBO Max were left unacquired in India until July of this year, when Amazon Prime premiered ‘And Just Like That…’. With this deal to exclusively stream HBO Max originals on their platform, Amazon have essentially filled a gap in the market and have given themselves a great asset to support their expansion in the region. This is evident looking at the premieres of 3rd party English shows on their platform, With almost 50% of the premieres from the last 6 months being HBO Max Originals. 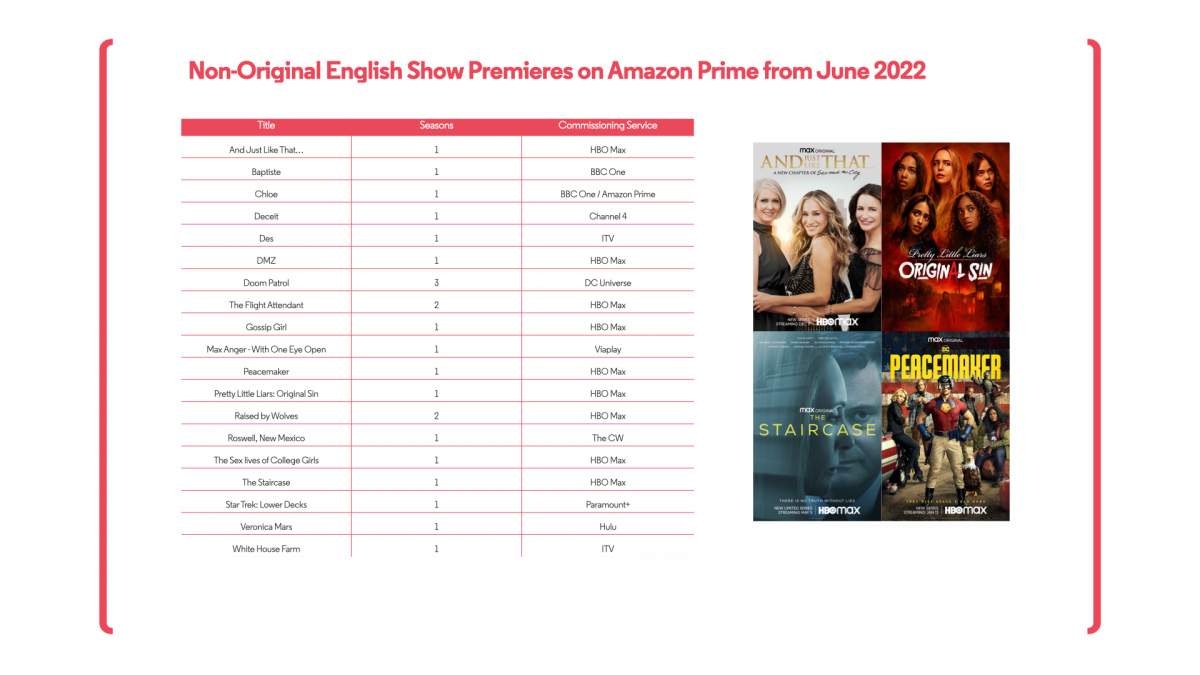 Amazon Prime has been the most successful Global SVOD service in India due to its understanding of the market and ability to obtain the required pieces of content. This has resulted in a massive drive towards their platform. They've also found ways to retain the growth they experience with a local content-first mentality and diversify their catalogue with new foreign content that was previously unavailable in the region. Amazon Prime’s confidence in the Indian market has resulted in great rewards as India has shown early signs of becoming one of its biggest markets.