WarnerMedia on the strategy and growth of HBO Max

In this episode I speak with Pierre Branco, Country Manager for France, Benelux, Middle East and Africa & EVP Head of Distribution and Ad-Sales EMEA at WarnerMedia. Pierre’s responsibilities really fall in two key areas. On one side, Pierre manages all consumer related business within those territories, ranging from theatrical distribution to video games. On the other, he has a key role in the commercial strategy for WarnerMedia within EMEA specifically operating the channels and services, ensuring that distribution and ad sales strategies are executed.

With all the buzz generated from the rapidly growing HBO Max, Pierre talks about how Warner’s linear strategy and SVOD strategy have been co-existing holistically. Pierre believes customers should engage with content however they like, emphasising how Warner’s linear and SVOD services work as complementary businesses. Pierre explains “we’re not in a world where you have one viewer that will always watch streaming or linear, there are multiple touchpoints with the consumer, and we aim to be making our content available on all those touch points, and for the consumer to decide how they want to watch content.” He explains how WarnerMedia’s strategy has therefore been to expand its content as widely as possible, and how linear channels play an integral role with streaming working in parallel.

We then discussed windowing between HBO Max and WarnerMedia’s linear channels. Pierre explains how WarnerMedia’s windowing strategy is contingent on the type of content and market it is being distributed in. Pierre emphasizes how WarnerMedia’s muscle is in the 1000s of hours it has and how it’s his job to choose where that content should sit, whether it be one service first and then move on to others or simultaneously on two. He then adds that obviously some of the HBO content will appear exclusively on HBO Max. The flagship content like the Max originals. At the same time, Pierre discusses how some content is made solely for channels and therefore WarnerMedia’s windowing approach should not be classified as binary “where it’s either everything’s exclusive or everything first there”. Pierre adds that they must adapt to the reality of the markets and the taste of the consumer. 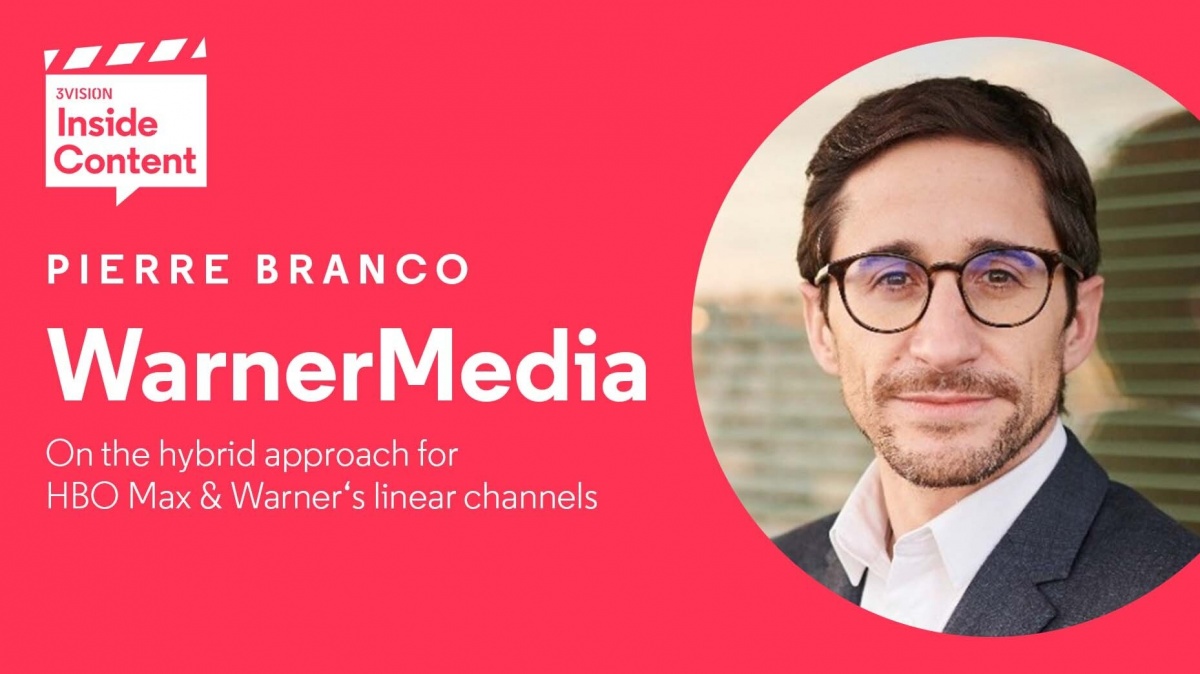 We then move on to talk about the rise of OTT services across the industry. Pierre believes that the OTT sector is undoubtedly undergoing massive changes across the world. Despite, the rapid evolution of OTT services, Pierre thinks the basics haven’t changed, in finding content consumers are ready to pay for and reaching out to platforms for that content. He states these content providers need to ensure they provide a unique value within their ecosystem so that consumers can justify their prices. Pierre believes the direction this will lead to is aggregation, having as many customer touchpoints on services as possible to give as much accessibility to the consumer for what they want to watch. This can be “a combination of linear and streaming or many different apps sitting on a platform, but the emphasis has to be in building that direct-to-consumer relationship.” Pierre, as an example, mentions Warner’s focus on kids channels and how younger kids tend to discover content on linear. So connecting back to the idea of more customer touch points Pierre says “having both a linear channel and a streaming service on one platform is a relevant approach to the consumer because they can engage with content on one side, and then potentially go on another medium to discover more.” Pierre therefore classifies WarnerMedia’s current content strategy to be a hybrid model, believing that streaming and linear are still very much complementary solutions.

Pierre then moves on to discuss B2B relationships and how they are fundamental to WarnerMedia’s growth. Pierre describes WarnerMedia’s B2B strategy as hybrid as well, given that in certain key European markets Warner engages in B2B relationships with some of the biggest platforms in those territories, whilst in others it has a direct OTT presence with consumers. “The reason is because we believe that the two again, are complementary; you don't need to choose between one or the other because you're not addressing the same consumers and subscribers.” Pierre mentions how WarnerMedia is working with platforms in markets where they are already operating, in the form of bundling for example. These relationships with platforms can be exclusive or non-exclusive. Pierre talks about Vodafone in Portugal specifically and how they leveraged HBO Max to boost their entertainment proposition and the strategy has really worked for them with HBO Max becoming the cornerstone of their content strategy. However, this doesn’t suggest WarnerMedia uses a one model approach across all markets but instead “looks at the reality of each market to see the best way WarnerMedia can grow within these and establish a strong presence for the service and the brand.“

During this conversation Pierre mentions how B2B relationships have influenced WarnerMedia’s content sales to 3rd parties because of the roll-out of HBO Max. HBO Max’s launch means that some content that was being sold to 3rd parties will now only be available on HBO Max. However, at the same time, HBO Max will not be the sole recipient of WarnerMedia’s immense content pipeline and selection will be made on what is most appropriate for HBO Max. Pierre talks about how a big portfolio of that library content can be sold to other players. He mentions how WarnerMedia will make sure that on HBO Max there is the best mix of content possible within it, but what doesn’t make it into HBO Max can be sold. “HBO Max needs to be positioned as a unique service with content you can’t find anywhere else. But then there's a range of content that may not be on HBO Max, or can actually be exclusive with other channels.” Pierre speaks about Free to Air channels as a receiver of such content given there is much less competition between Free to Air and streaming services. This can also be extremely important in growing the brand image by putting content out there for free.

Pierre then moves on to talk about windowing. One big change happening at WarnerMedia is to make movies available 45 days after their theatrical exhibition and make them available on HBO Max. The goal for Pierre’s team is to make consumers understand where to find the right content. “It’s about strategically ensuring the consumer to HBO Max knows where the best from WarnerMedia can be found on the services they subscribe to…after that, then there are other window opportunities.” Pierre outlines WarnerMedia’s very clear strategy, Max is the top priority for the company, and it has to ensure consumers see its value. Regarding, HBO Max’s evolution, Pierre says that the service is still to launch in a number of markets and it has to be made global. “Once a global status is reached you have the ability to make content travel even more than we do today.”

Here is a breakdown of what is discussed in the episode:

How does MX Player succeed in a market where even Netflix is struggling?

Samsung on its new service FAST Samsung TV Plus, Partnerships, TVs and the future of AVOD