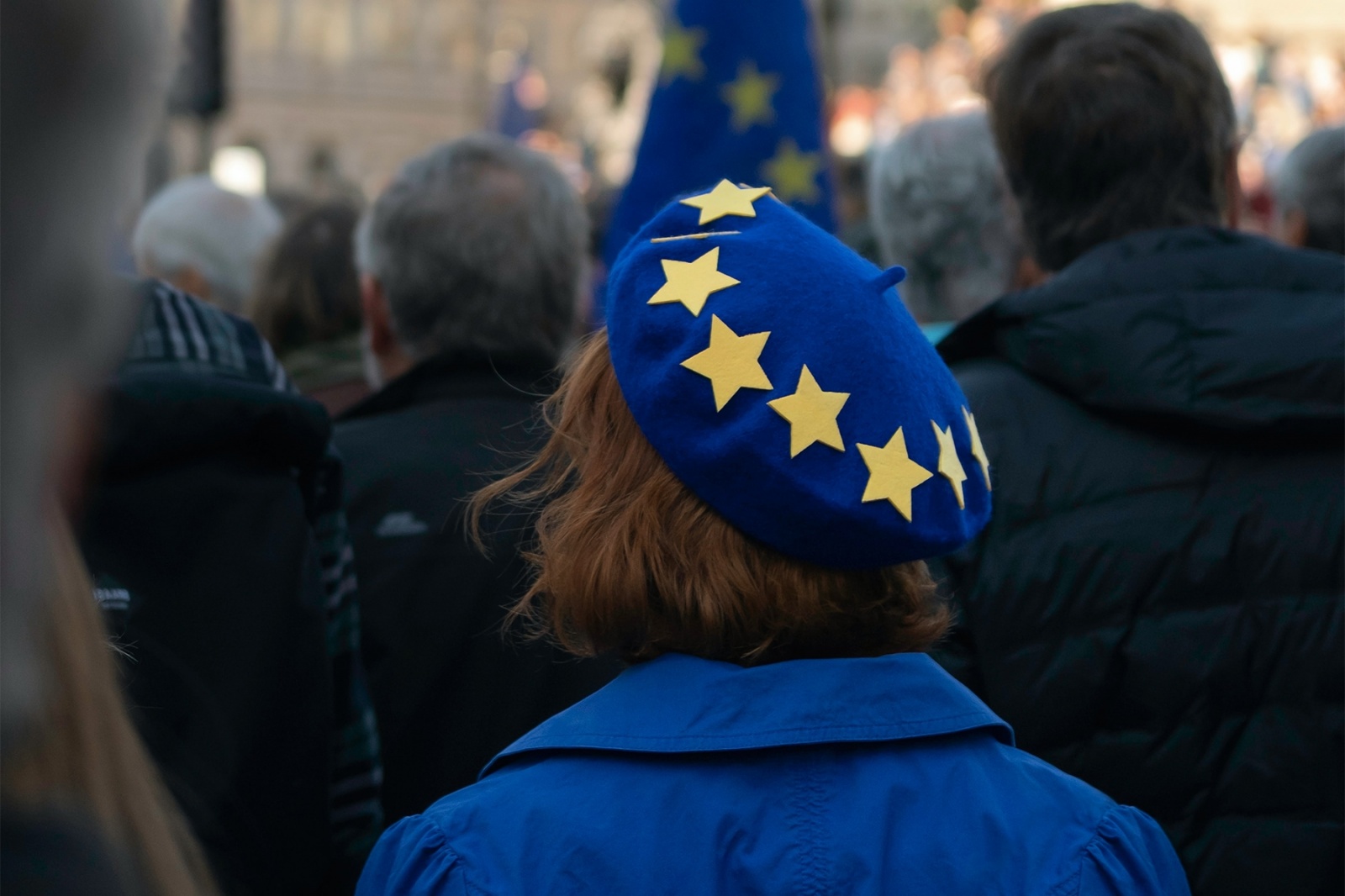 UK TV Shows to be Cut from EU Quotas

It has been widely reported that the EU is considering the removal of the UK from its existing content quotas for terrestrial TV and streaming services. European originating content must form the majority of terrestrial TV schedules and upwards of 30% of titles on VOD services. Despite the UK leaving the EU through Brexit, Film and TV series continues to qualify under EU law, however there is said to be a concern that British content accounts for a “disproportionate” amount on European services, threatening the “cultural diversity” intended by the EU.

Some European countries have gone further with their own content rulings - France has a strict 60% policy of European titles from VOD services and requires platforms to invest a minimum 15% (with plans to increase this even further) of turnover into European productions.

Europe is today a key distribution market for UK Film and TV shows. In the latest UK TV Exports Report (produced by 3Vision on behalf of Pact), Europe contributed £490 Million in export revenues, a +4% increase year-on-year and 33% of the £1.4 Billion total. France is the most lucrative European market for sales, with revenues totalling £102M in the year ending March 2020, followed by the Nordics (£77M) and Germany (£75M). 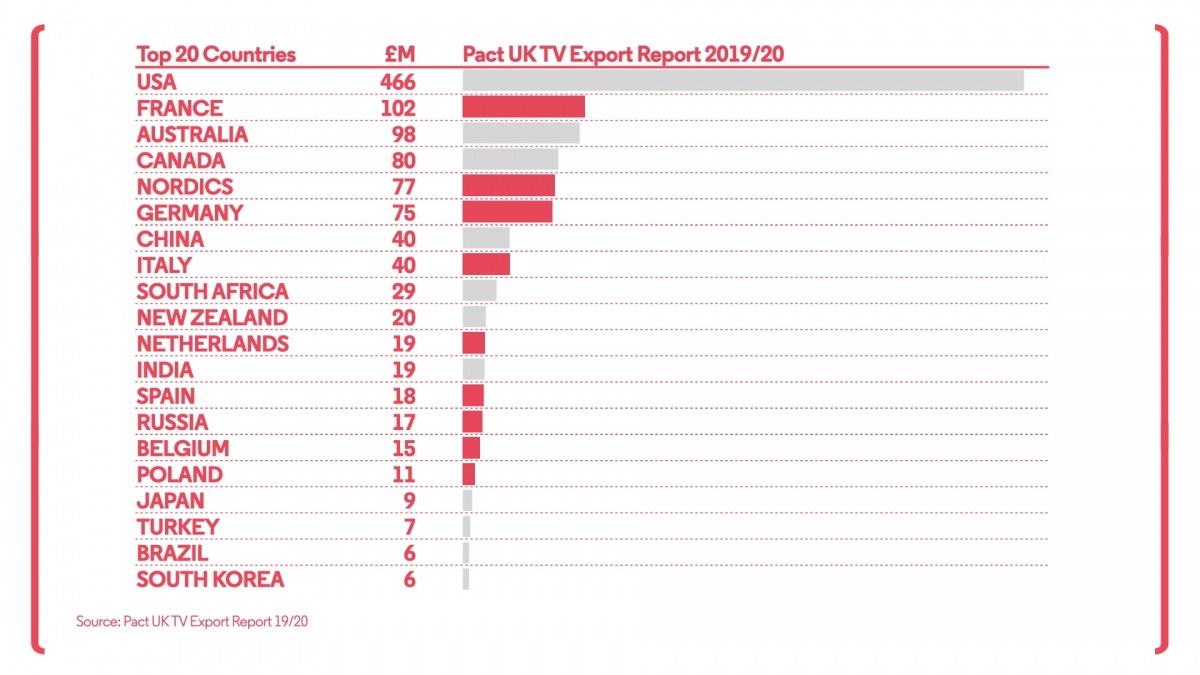 SVOD services in Europe are the most likely destination for UK produced content (47%), as they are for content from the US (57%). The presence of US Studio owned D2C services in Europe perhaps accounting for the higher proportion of SVOD buyers, with UK content more likely to find a home in a Free or Pay TV environment. 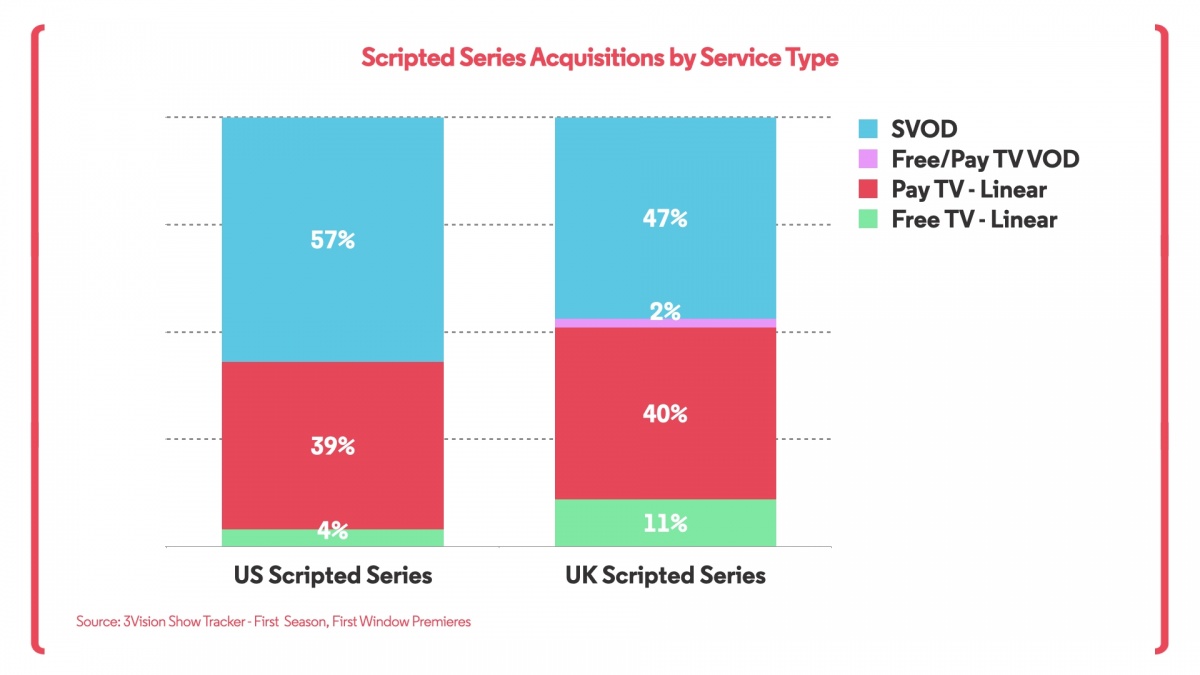 Telia in Sweden is the biggest buyer of UK content overall, with 24 titles being utilised across three Pay TV channels, one Free TV channel as well as their digital adjacent services in recent years.

The Spanish SVOD service Filmin is a significant buyer of UK content, favouring it over US scripted TV series and taking 16 new shows in their first window (and one second window). ITV Studios has sold six titles to the service (including ‘Brassic’, ‘Flesh and Blood’ and ‘The Singapore Grip’) and Banijay three (‘Adult Material’, ‘Deadwater Fell’ and ‘Deep Water’). All3Media has sold a number of TV series to Filmin from a variety of production sources, including UK/US co-productions (‘The Bisexual’ and ‘All Creatures Great and Small’) and content produced in mainland Europe (‘Fartblinda’ from the Swedish production company FLX). 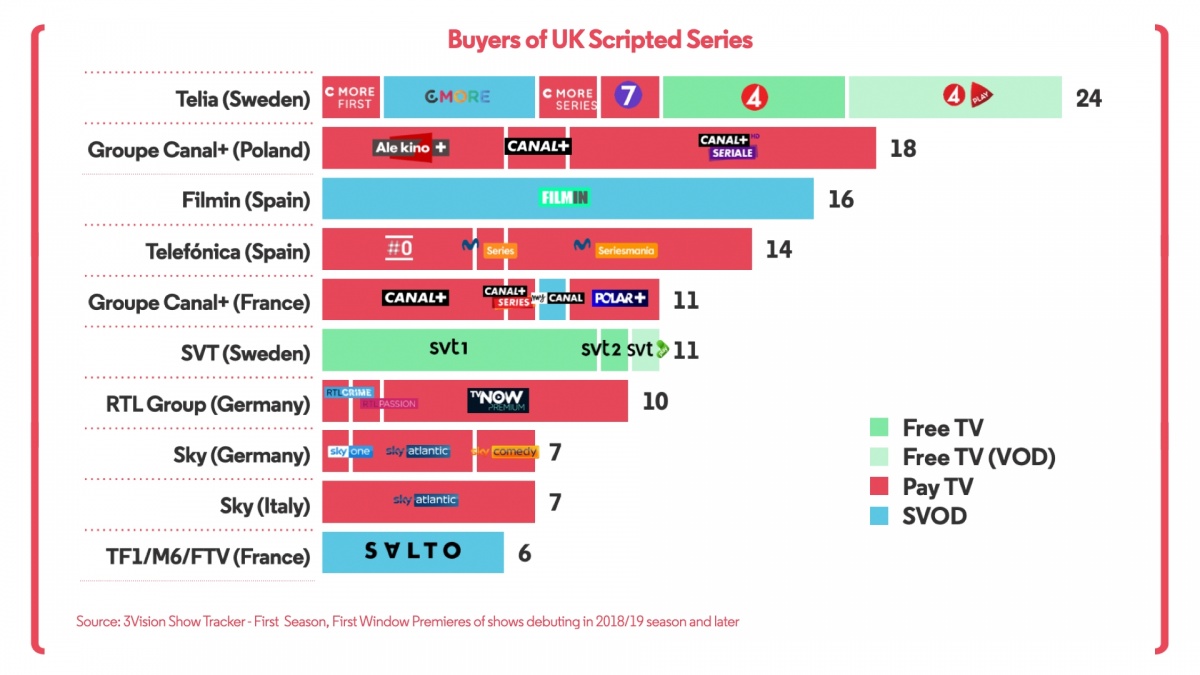 Any potential revisions to EU quotas is not necessarily a barrier to UK content appearing on European services in the future. UK produced TV series is evidently popular with audiences across the continent, based on how well it is currently being distributed and acquired by a wide array of services.

A number of UK TV series from the current season have already found distribution in a number of European markets. All3Media’s three-part series ‘Des’ has been acquired by SVOD services in European Show Tracker markets, with StarzPlay acquiring the series in France, Germany and Spain, NPO Plus in the Netherlands, HBO Go in Poland and C More Play in Sweden. Elsewhere, shows have sold in different markets to Free TV (e.g. BBC Studio’s 'Life' to SVT2 in Sweden) and Pay TV channels (e.g. Fremantle’s ‘The Sister’ to Ale Kino+ in Poland). 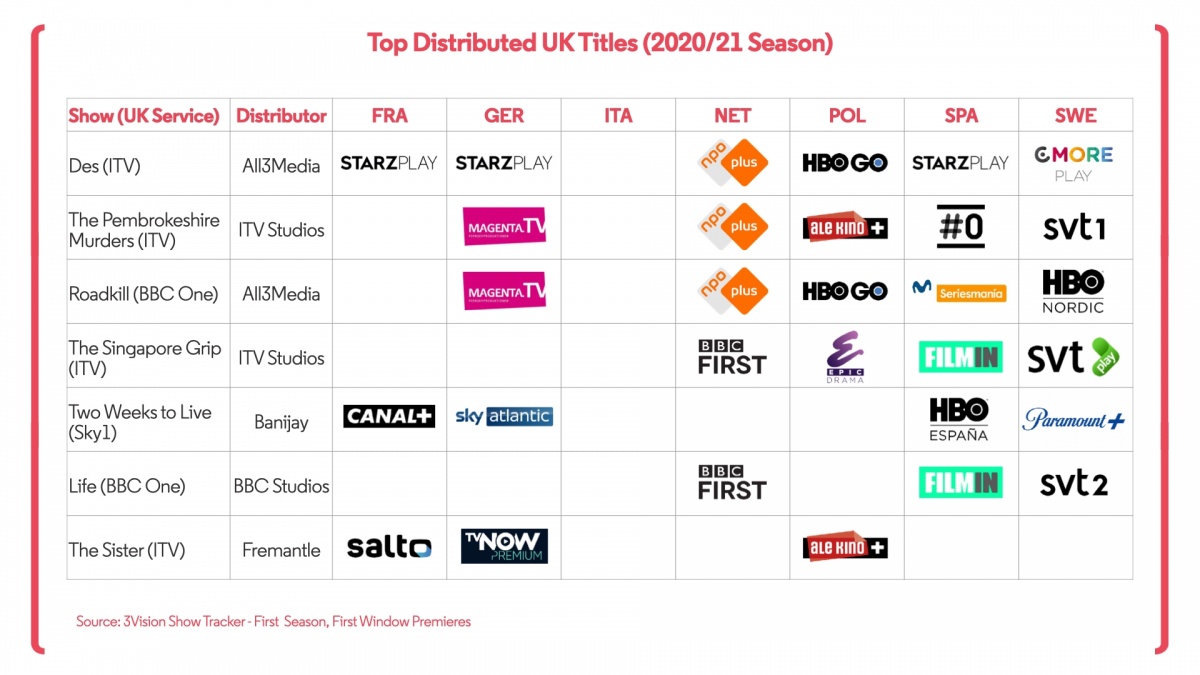 Despite contributing £40 Million to UK TV Exports in 2019/20, Italy remains a difficult market for the sale of UK scripted TV series, with just one title from the 2020/21 season (‘Intergalactic’) finding distribution (an NBCUniversal distribution, vertically integrated within their Sky Atlantic Pay TV channel). Just 17% of new shows from the 2019/20 season onwards have found a home in Italy, compared with 44% of US (and much down on UK distribution in other European markets). 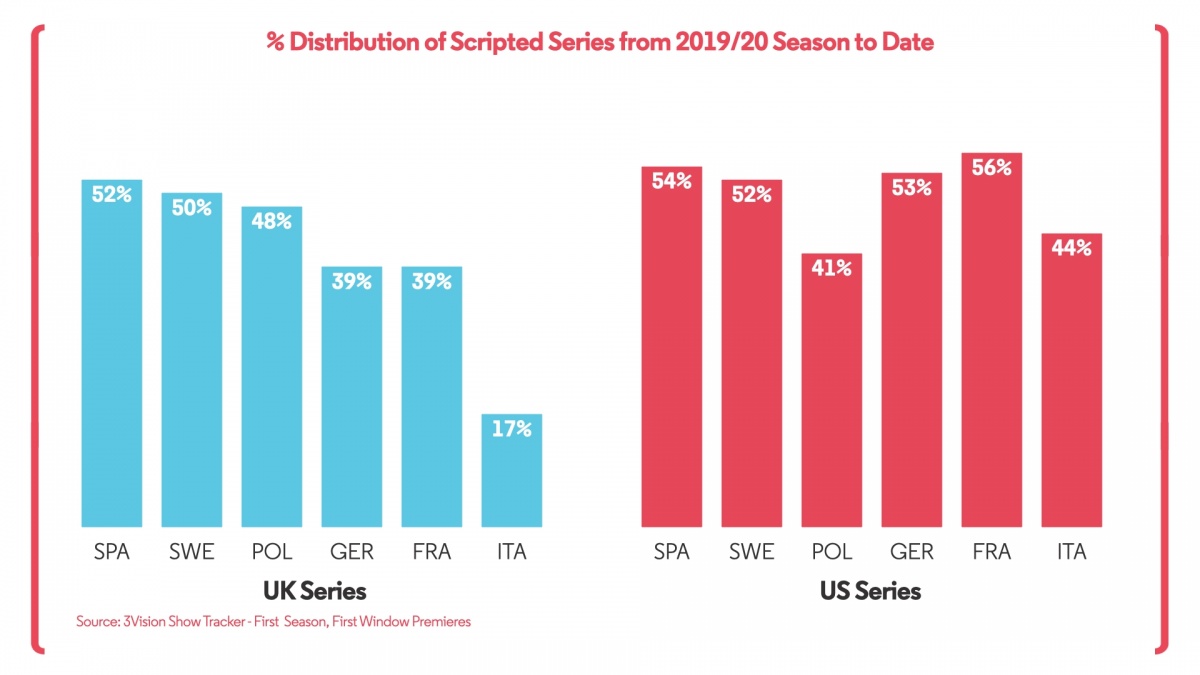