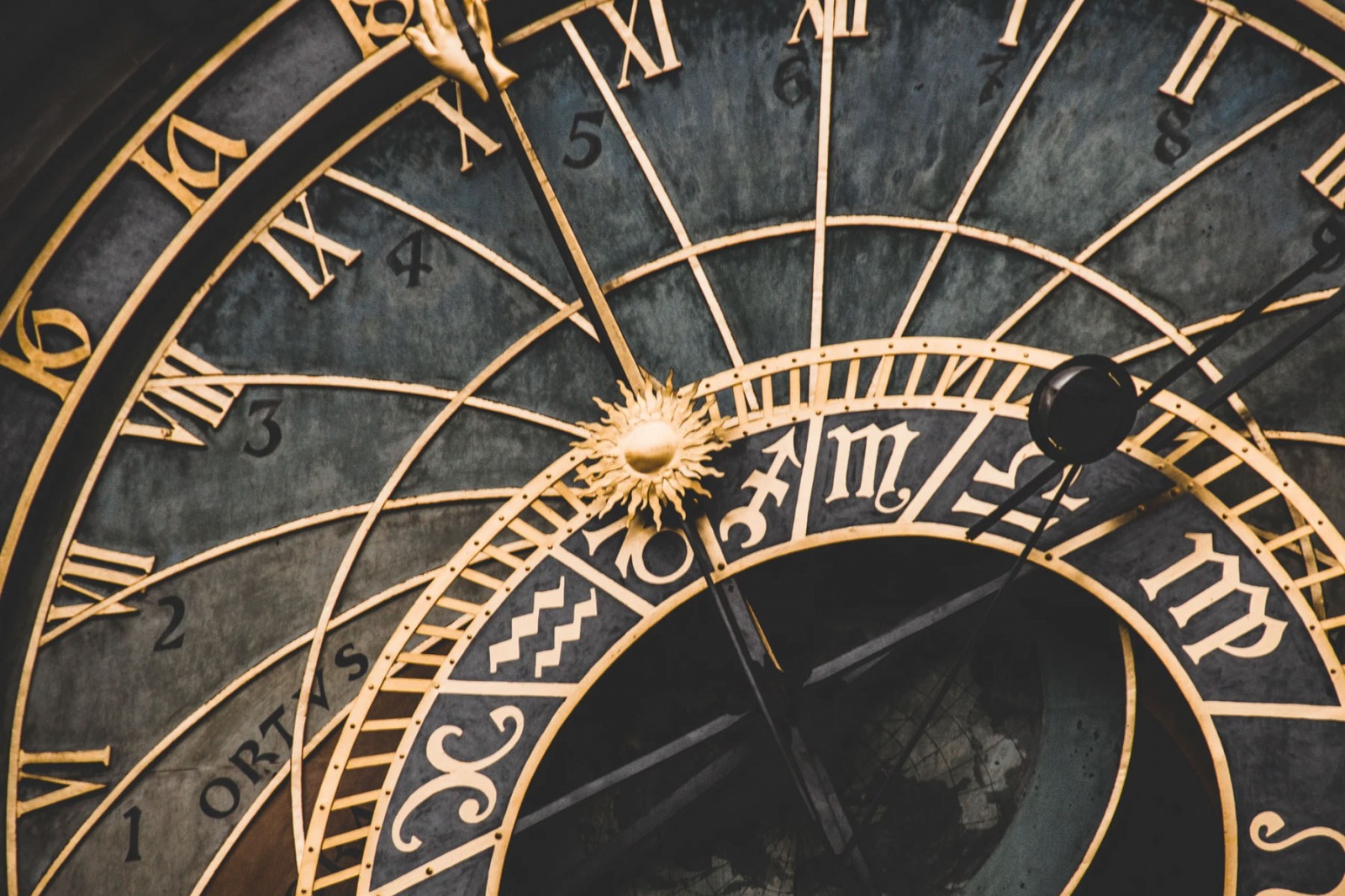 Majority of US Sales to International Markets occur within 6 Months

By examining recent titles that debuted in the 2019/20 season and beyond in the US, we can see that the average amount of time between a title’s original US premiere and their eventual local premiere (in the case of there being a sale) is less than six months in every Show Tracker market 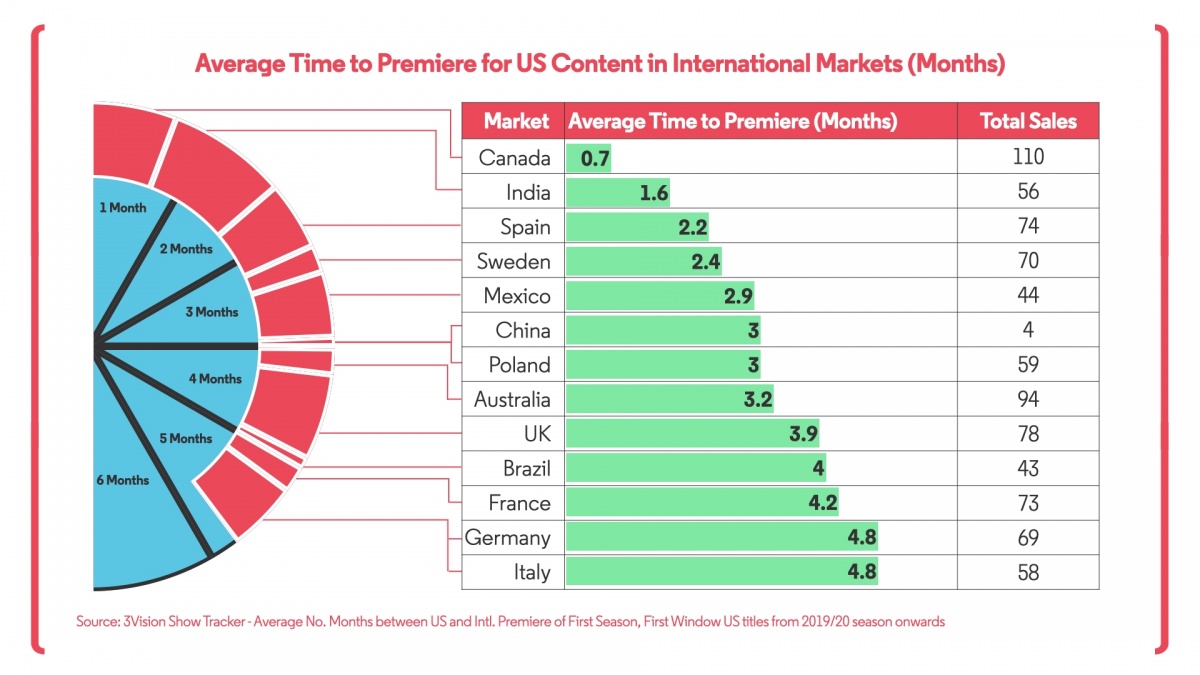 Canada has the lowest average by far due to the sheer amount of simultaneous premieres the market has with the US. Virtually every US title acquired in Canada (particularly for Broadcast) airs at the exact same time as it does in the US

This practice is also common in Latin America which is why, while acquiring much less content than other Show Tracker markets, what Mexico does acquire is typically aired relatively quickly after its US debut

Activity from services more local to Brazil however, such as Globoplay, inflates the average in that market against what is otherwise typical release parity across all Pan-LATAM services.

SVOD heavy markets such as Spain, Sweden and India all have low averages, with the studio owned SVODs in each market (WarnerMedia’s HBO in Sweden & Spain, Disney’s Hotstar in India) typically leading in US acquisitions and premiering them a day after their US release

China continues to have extremely limited sales with only four US titles being acquired that originally debuted in the 2019/20 season and beyond, but those few that did doing so in relatively timely manner

France, Germany and Italy meanwhile have the highest average, between four and five months, in part due to the added time spent recording dubbed versions (in some cases however the English language versions are released ahead of these) but also with newer services such as Joyn in Germany and SALTO in France acquiring older shows to boost their catalogues so to better compete with other SVOD services in their local markets

Some broadcasters are now intentionally holding back on releasing a show until after its run in the US so they can boxset a whole season, either directly on their SVOD or on a catch-up service in line with a linear debut

45% of international acquisitions that premiered over four months after their US debut were boxsetted by their buyer so, whether a planned decision or not, services are typically taking advantage of the opportunity to boxset that a delayed acquisition gives them 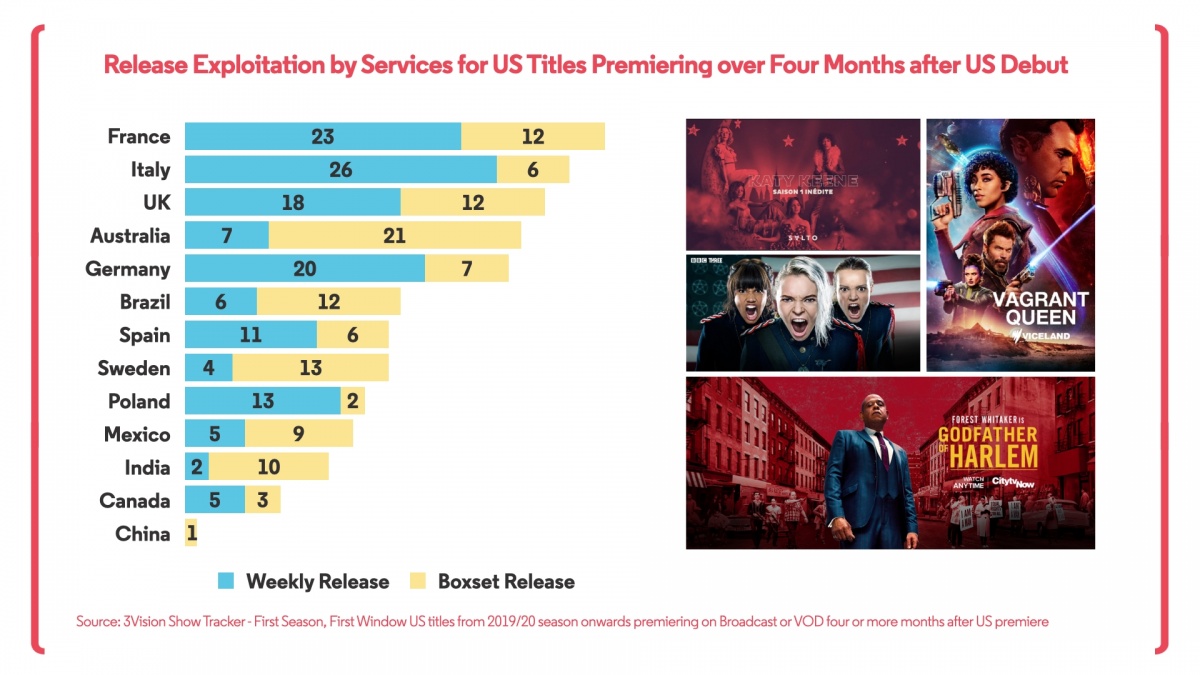 While what does sell is typically doing so quickly, distributors continue to struggle to sell US content in markets such as LATAM, Italy and China, leaving plenty available for prospective buyers 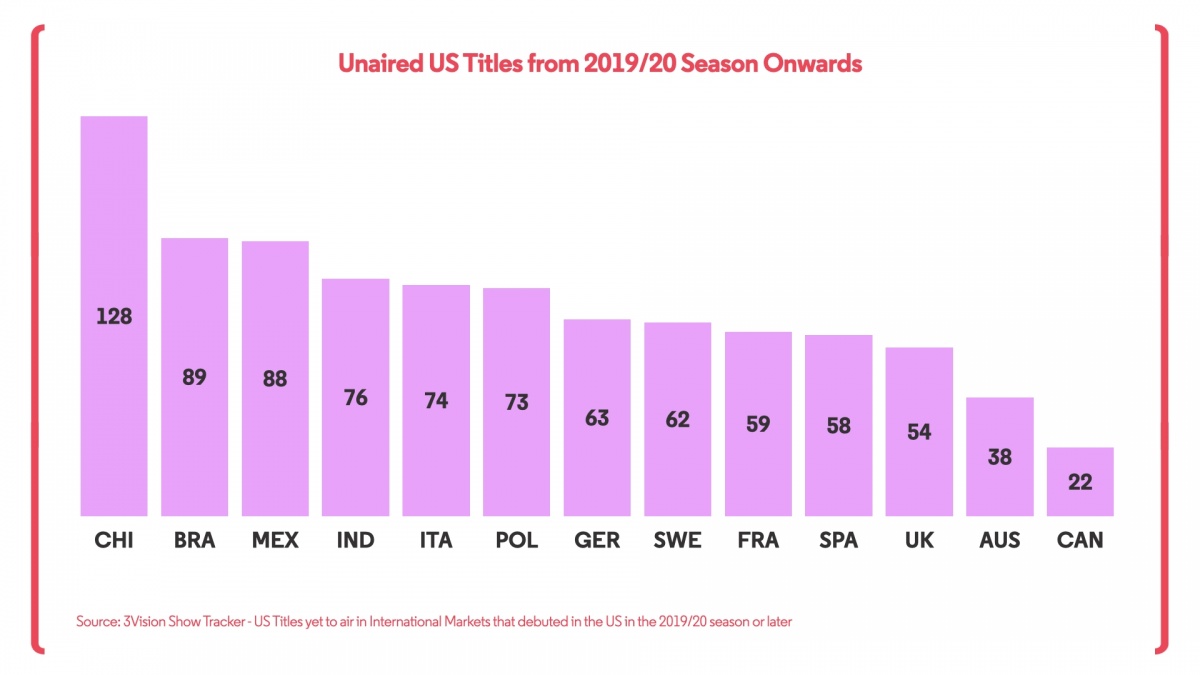 How old a title is can be an effective indicator for its potential availability to acquire. In the UK for instance, 34 out of the 54 titles that have yet to air in the UK premiered in the US over four months ago, making them more likely to be unsold than the more recent 20 titles which services may have acquired with the intent to hold back for a boxset release

Exceptions to the average however have been exemplified in the wake of the COVID-19 pandemic, with older titles dating back to the 2016/17 season, including some relatively high profile shows, only recently achieving successful first window sales in Show Tracker markets in 2021 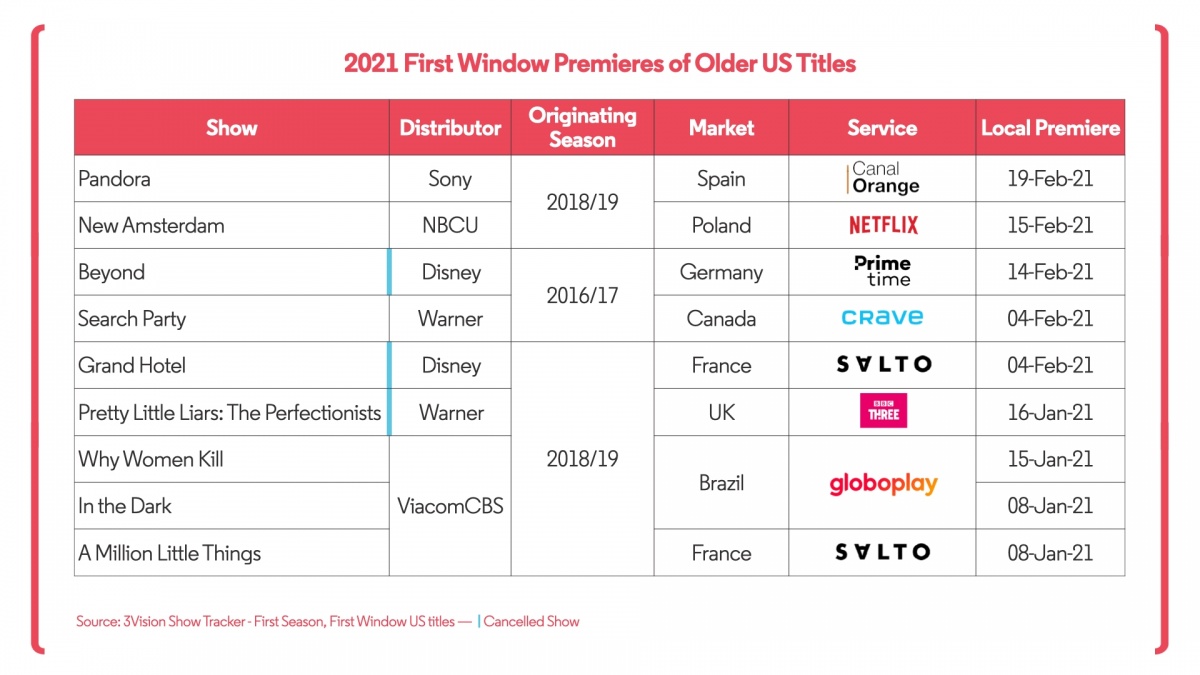 The right show being available even brings out Netflix, which for the most part has been acquiring less third-party content in the first window, especially on a local market basis

The title has evidently found great success on the platform in Poland, reaching the top spot in the Netflix Poland Top 10 for the period of the 13th to the 19th March

With the majority of these buyers being broadcaster owned adjacent digital services, distributors may see this as a sign to re-engage with buyers such as these that appear to have less constraints on the types of content they acquire than their traditional linear counterparts