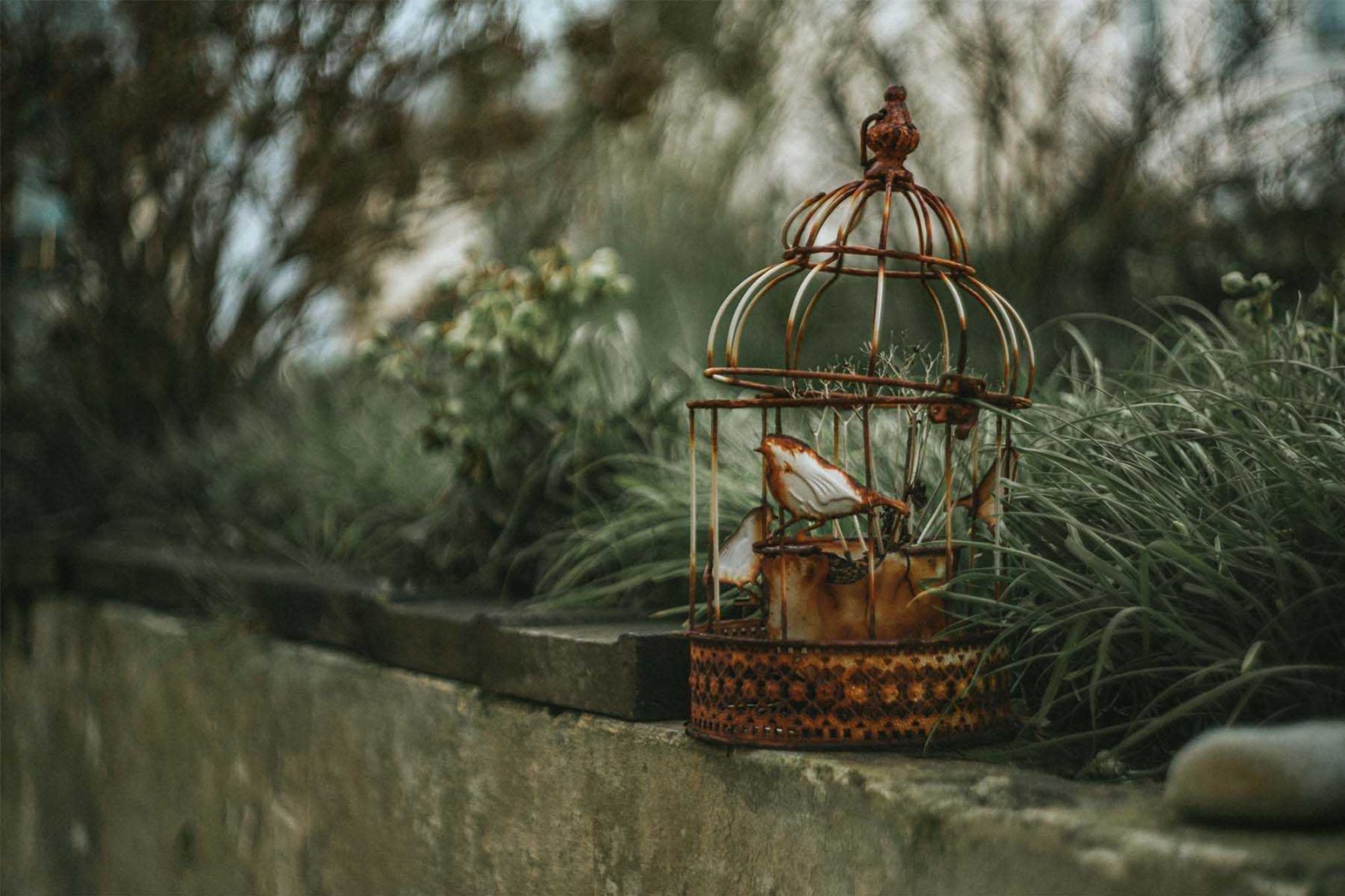 This month saw one of the first significant international launches of HBO Max in The Netherlands, after an expansion that has so far been limited to territories with an HBO presence already such as Spain, Poland, LATAM and the Nordics.

Warner so far has been unable to match the prolific levels of vertical integration exhibited by some of its rivals such as Disney, who are now vertically integrating almost the entirety of their current scripted catalogue. Show Tracker reveals that this largely comes from the presence of existing volume deals for HBO content holding back the launch of HBO Max in the majority of international markets where Warner does not have a service presence already. In fact, it was only after Warner’s existing volume deal with Netherlands operator VodafoneZiggo had expired was it able to bring HBO Max to market. 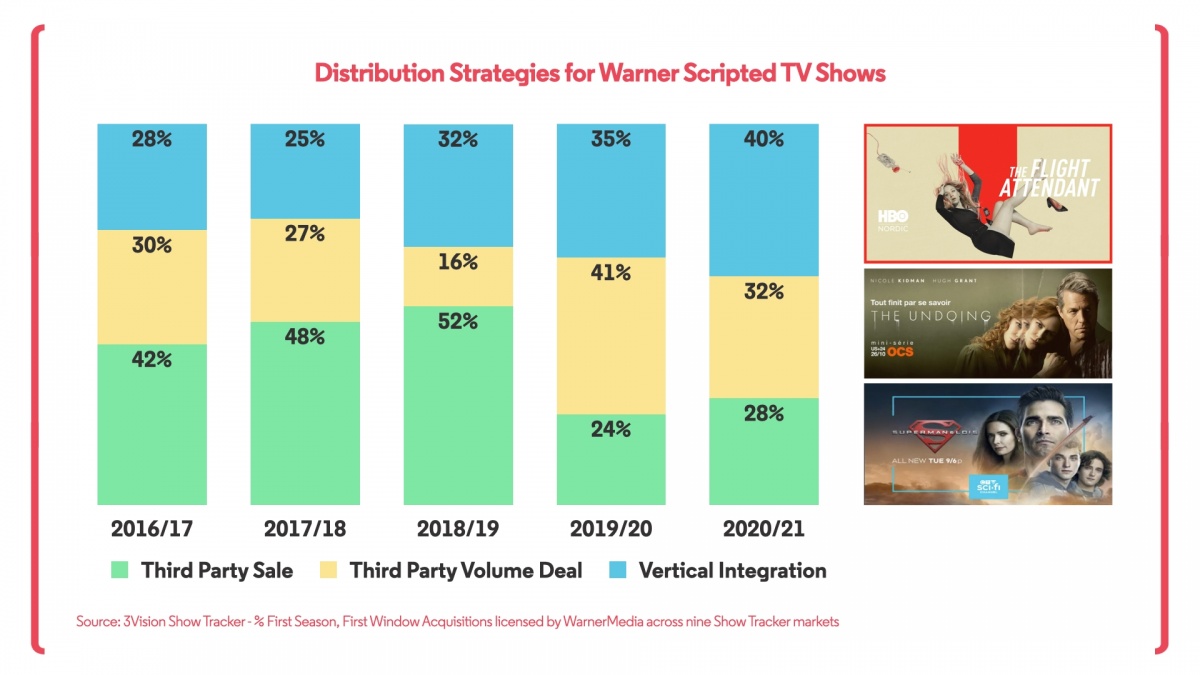 Warner has operated HBO Espana (Spain), HBO Nordic (Nordics) and HBO Go (Poland) for many years in Europe prior to their rebrands to HBO Max, with all of these services acting as huge drivers of vertical integration trends in those markets. This was even before Disney and Lionsgate launched Disney+ and StarzPlay respectively. In fact, the combined presence of HBO Espana, StarzPlay and Disney+ in Spain resulted in 76% of new premieres in the 2020/21 being vertically integrated.

For many third party buyers of US content, the switch in strategy from studios to vertical integration represents a growing challenge to acquire high quality TV shows for their services. On top of this, the historic prolific levels of volume deal sales from Warner has meant that many local services have been cut out of any opportunity to acquire any HBO content, with these TV series instead destined to appear on the many homes of HBO. For VodafoneZiggo in The Netherlands their short term solution to their loss of Warner titles is to sign a volume deal with Paramount, with the hope Showtime content can fill the premium drama gap left following the exit of HBO.

Warner TV shows that are not tied up in volume deals, namely those not commissioned by HBO, have historically found third party homes with individual buyers, although the trend for these types of sales have ultimately been going down. This activity is unlikely to continue in markets once they have HBO Max however. Warner vertically integrated every single new scripted title in the 2020/21 season on their own services in Spain and Sweden bar one TV show. This one exception to the trend is ‘The Right Stuff’, a Disney+ Original since cancelled by the SVOD, with Warner set to potentially greenlight and take on a second season for themselves.

In the US WarnerMedia has begun to distribute less titles commissioned by rival services in recent seasons, with 73% of Warner distributed US commissions last season debuting on Warner owned services in the US. 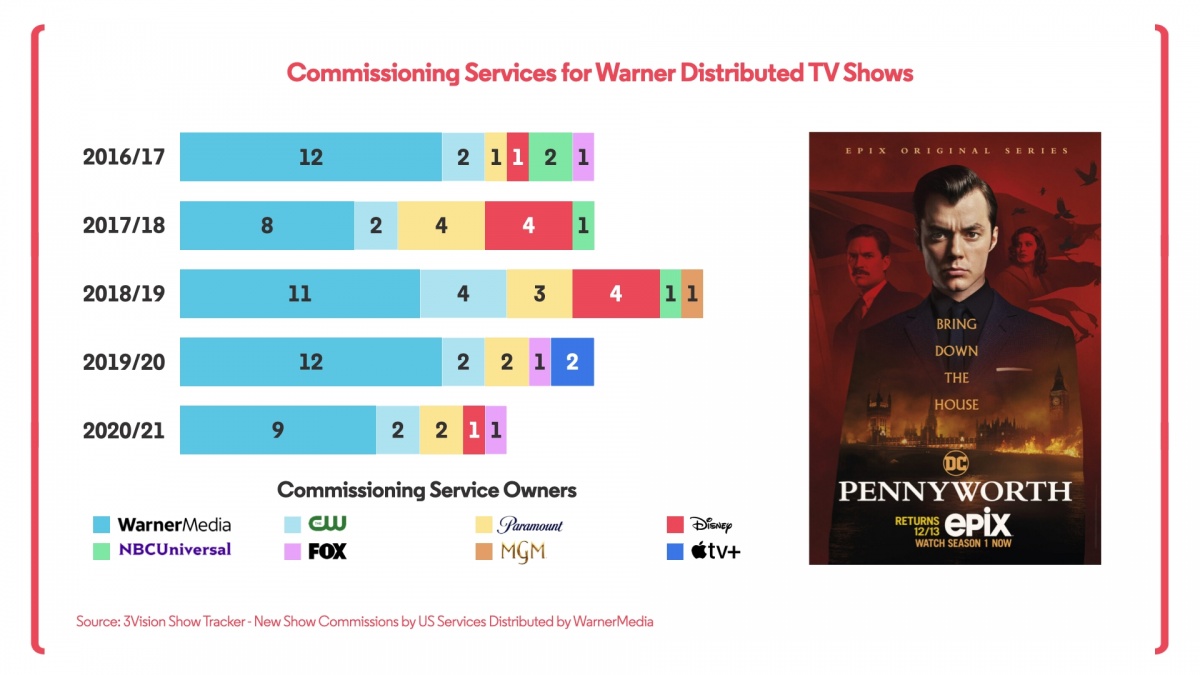 Certain relationships Warner once had with service owners such as Disney, distributing TV shows commissioned by ABC, Hulu or Freeform, have for the most part dried up, with the exception of the aforementioned short lived ‘The Right Stuff’ on Disney+. Warner has engaged with newcomers such as Apple TV+, distributing both ‘Little Voice’ and ‘Ted Lasso’, the latter TV show helping Warner become the most successful distributor at last year’s Emmys. The relationship has continued with Warner providing distribution for the Apple horror limited series ‘Lisey’s Story’.

Other signs pointing to Warner’s change of strategy in the US to mirror its hopeful plans abroad include relocating TV series already in progress. ‘Pennyworth’ originally debuted on MGM’s Epix in 2019, with its second season appearing there also. It has since been announced however that the TV show’s third season will instead air on HBO Max, ending the two year relationship between Warner and Epix.

While its ultimate goal as a distributor at the moment appears to be providing a direct-to-consumer route for all of its content in as many markets as possible, its strategy thus far for HBO Max as a service has demonstrated a more domestic approach for now. To help boost its growth as an SVOD in the US market, likely one of their most valuable, Warner has acquired a number of their Max Originals from third parties. 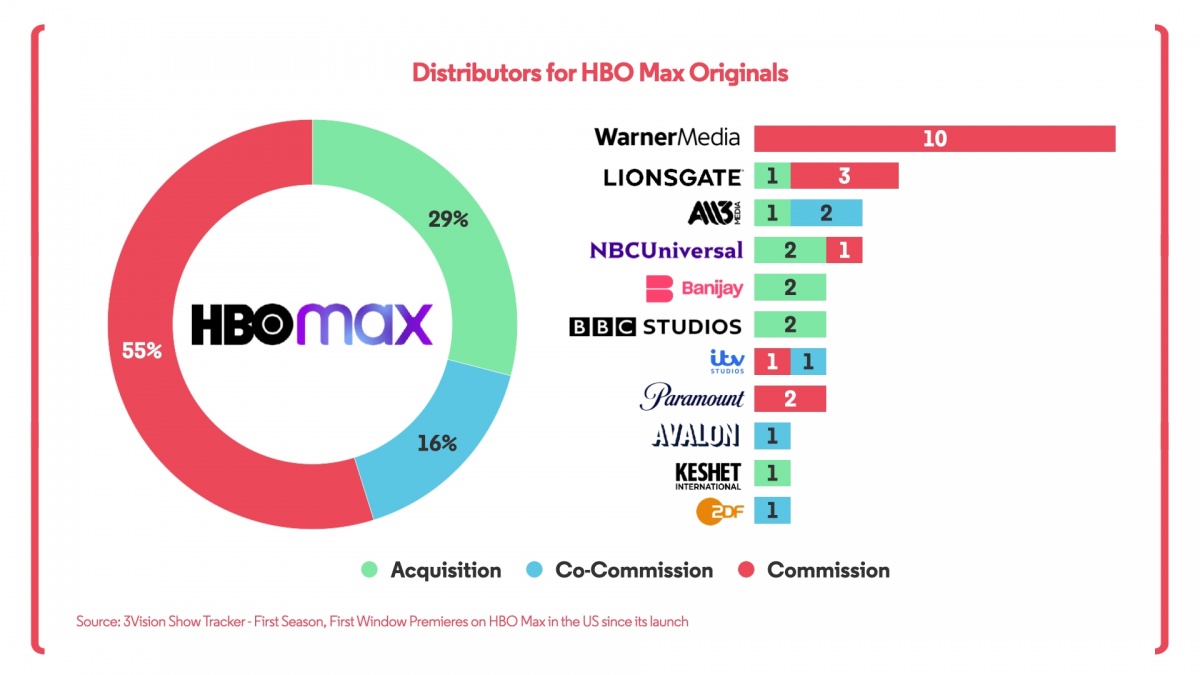 Only just more than half of the HBO Max Originals that have debuted in the US were in fact commissioned by the service. The SVOD has supplemented much of its early slate with acquisitions of UK television shows from a number of distributors. As a result disparities across borders are already starting to occur. ‘Two Weeks to Live’ was acquired by Warner from Banijay and branded a ‘Max Original’ in the US, while in Latin America, Sweden and Australia, Paramount+ has acquired it and branded it a ‘Paramount+ Exclusive’.

Even key commissioned TV shows from the service are instead distributed by third parties, such as Paramount (‘Made for Love’), Lionsgate (‘Love Life’) and NBCUniversal (‘Hacks’). This has already provided Warner a challenge to their international rollout as some of these distributors have already begun to sell these TV shows to would-be competitors to HBO Max. In Sweden for instance, Lionsgate sold ‘Love Life’ to Telia’s C More Play almost a full year before HBO Nordic was able to acquire it as a second window.

These strategies obviously do not resolve the key hurdle blocking Warner’s international HBO Max rollout - its existing volume deals, with some such as that it has with Sky in the UK, Germany and Italy set to last until 2025. Sky seems to be setting themselves up with some cudgels to help bring a fight in future negotiations to perhaps carry the service on its platform, having recently renamed Sky One, named as such for over three decades, to Sky Max, complete with similar iconography. 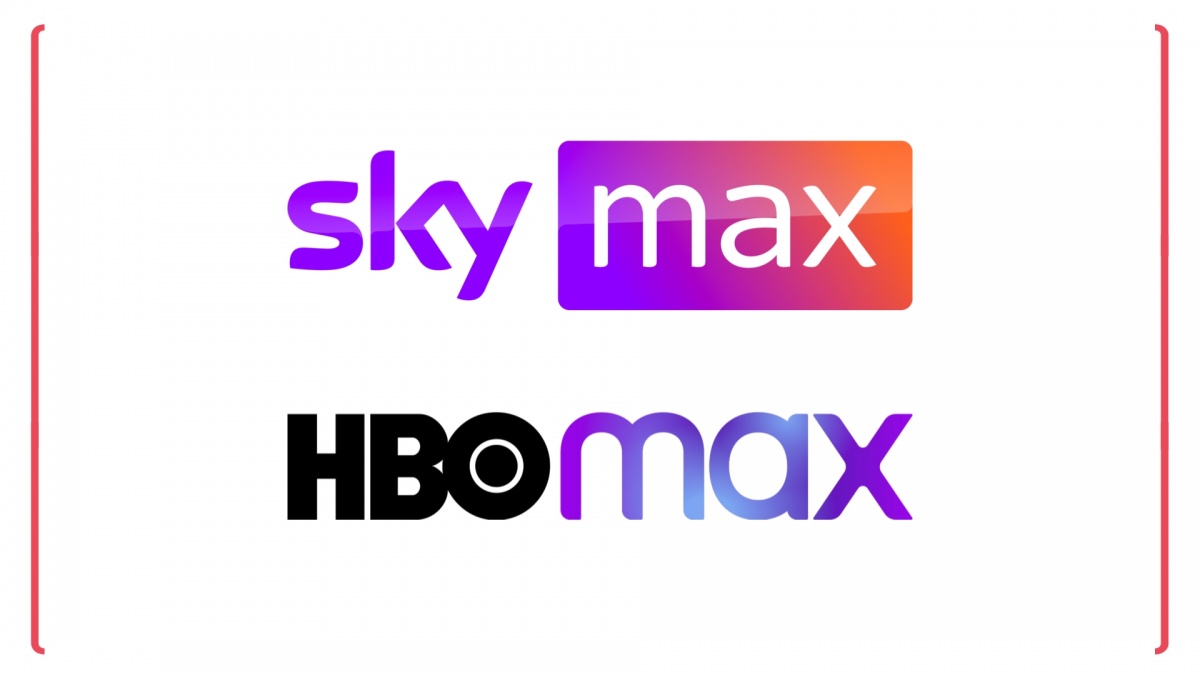 Warner is obviously keen to be seen to be expanding HBO Max internationally and while its easy to dismiss its past launches in Spain, Poland, LATAM and the Nordics as little more than a rebrand, it did come with an injection of new library content and a price reduction in some markets, signalling a desire to take even more of the SVOD share in markets they have already been historically strong in. More importantly however are the brand new markets for Warner that are slowly being unlocked by expiring volume deals such as The Netherlands. The speed of HBO Max’s launch following the end of Warner’s volume deal with VodafoneZiggo demonstrates how keen the studio is to abandon them and can in turn provide a reliable timeline for the SVOD’s international rollout.

Once Warner is unshackled by its volume deals it will go all in on vertical integration much like their rival Disney, leaving an arguably larger gap in the seller’s market than that left by Disney’s abrupt exit in 2021 following the launch of Star. Local services will have to look for new suppliers of content for their services, giving those distributors without a D2C service (and those that haven’t been bought by a streamer) the opportunity to sell their content to some historically big spenders across the world.