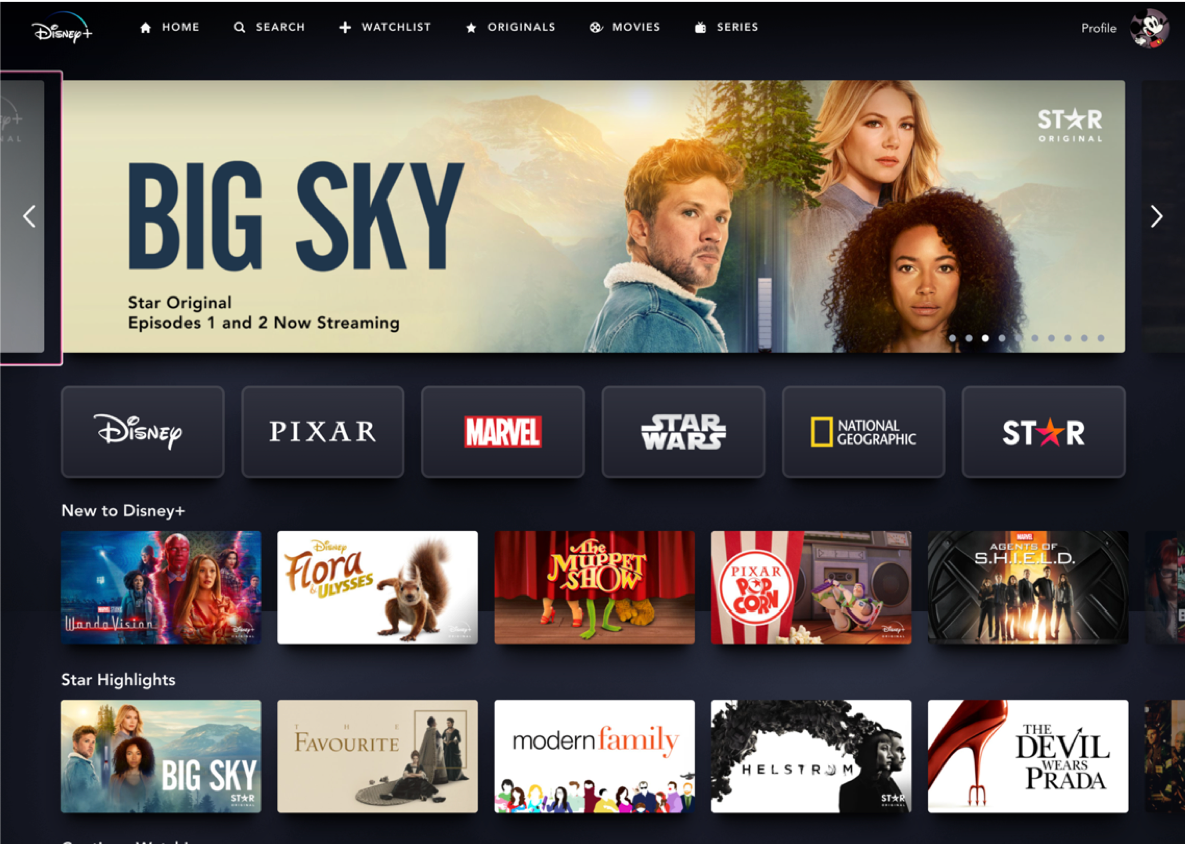 Disney+ adds Star and its biggest content release since launch

The general entertainment brand ‘Star’ was added to the Disney+ streaming service this week, bringing with it the biggest drop of new content since launch. In the UK alone this amounts to over 75 individual TV series, more than 270 films and four branded ‘Star Originals’. The latest addition to Disney+ is now available in Europe, Canada, Singapore, Australia and New Zealand, with Eastern Europe and selected Asian markets later this the year. Disney have increased the subscription cost at the same time, with the UK price rising from £5.99 to £7.99 for new customers.

Four ‘Star Originals’ are now available on the service, with Disney resisting the urge to Boxset these and instead releasing the first and second episodes of each series at launch. Each title had originally premiered in the US last year where the Star brand is not included within the Disney+ environment (due in part to the presence of Hulu).

Three of these series had international distribution last year in one Show Tracker market each, ‘Big Sky’ in Canada (CTV premiering it on the same day as ABC in the US) and ‘Helstrom’ and ‘Solar Opposites’ in Poland (both on Disney’s Fox branded Pay TV channels). In Poland both series were only made available with rolling 5 episodes catch up - this being common for Disney’s Pay TV channels in this market.

Forthcoming Star Originals come from a variety of sources, with three scheduled to launch in March. ‘Dollface’ originally premiered in the US in November 2019 on Hulu and has had some international distribution in Canada (Crave on the same day as Hulu), Spain (HBO Spain in July 2020) and Germany (Joyn Plus in October 2020).

The next Star Original to follow is the aptly titled ‘neXt’ which premiered on Fox in the US in October 2020 and has had distribution through a number of Disney owned services in Show Tracker markets including the Disney+ Hotstar Premium streaming service in India and Fox branded Pay TV channels in Europe. It has also been acquired by Corus in Canada (for Global TV) and Foxtel in Australia (for Fox One).

The final Original scheduled for release in March is ‘Love in the Time of Corona’ which premiered in the US on Freeform in August 2020 and in Spain on Disney’s Pay TV channel Fox Life in December. 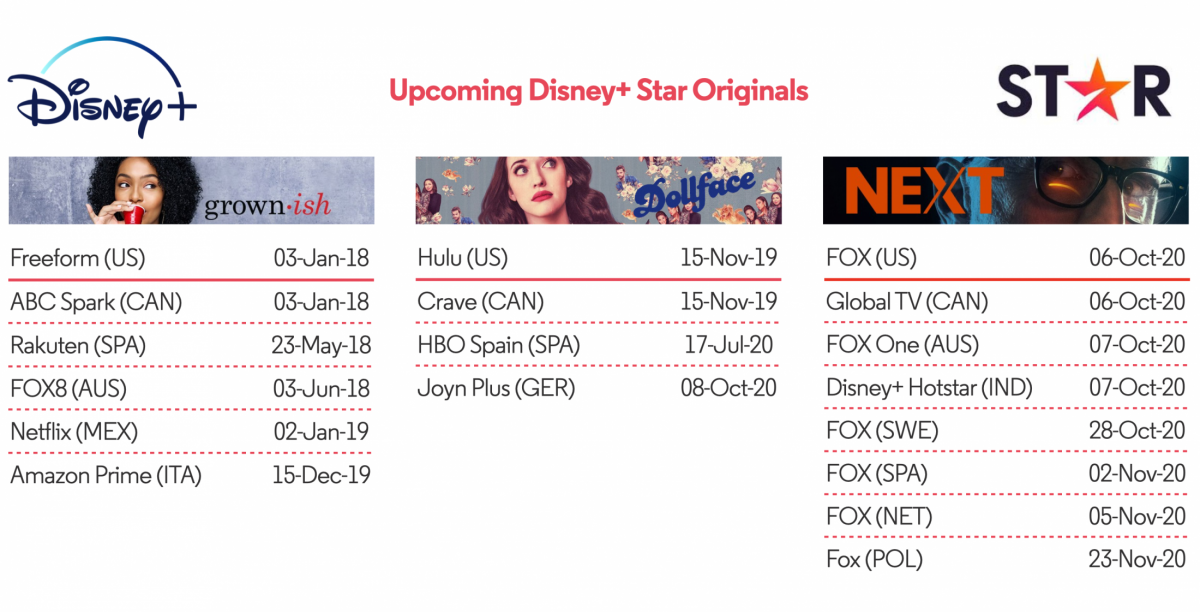 Looking further ahead, in April ‘Grown-ish’ will launch. This series has been in the Disney catalogue for two years since its first premiere in the US in January 2018 (on Freeform) and has been sold to third party services including Rakuten (Spain), Netflix (Mexico) and Amazon Prime (Italy). Like all other Star Originals that have had some distribution to date, these Originals may not be immediately available in all Disney+ markets.

A longer list of Star Originals has been announced for 2021 including titles targeted at specific local markets, these including ‘The Good Mothers’ for Disney+ in Italy, ‘Sam - A Saxon’ for Germany and ‘Parallels’ in France. 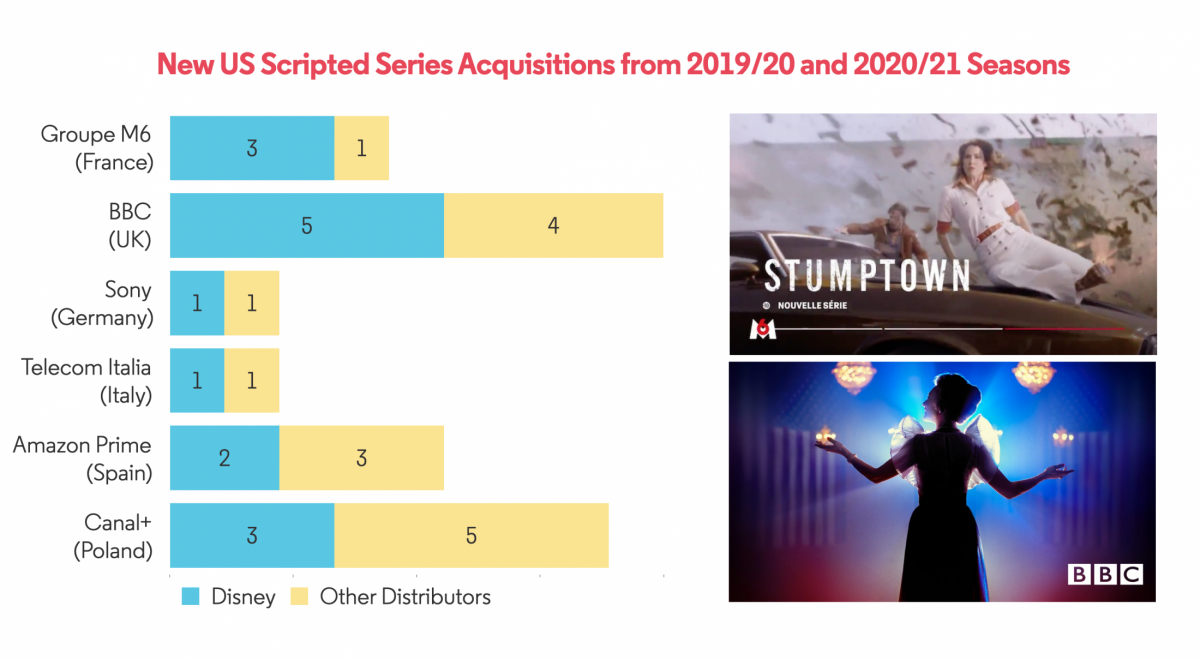 With Disney now including adult-orientated TV series within their SVOD proposition, it raises questions about the future content pipeline for a number of international buyers. Three of the four new US series acquired by Groupe M6 in France from the last two seasons have come from Disney. M6 and Disney have had a partnership in France for a number of years but the former may soon need to look for alternative sources of US premium drama series should Disney decide to vertically integrate all studio content into their own D2C. In the UK the BBC have a similar deal with FX (signed before Disney’s acquisition of Fox Networks Group) contributing five of the last nine US shows to premiere.

The results from our 2021 Sports Rights Survey