Pact on the impact of the potential Channel 4 privatisation

In this episode I speak with John McVay OBE who is the Chief Executive of Pact, the UK’s leading Trade Association for Film, TV, Animation, Children’s and Digital production companies. John contributes to many UK government and international policy fora on the creative industries, broadcasting, trade and investment. He also has extensive experience of policy development across all aspects of broadcasting and television production and leads on all Pact policy development in the UK and Europe.

During the episode we discuss Pact's mission, which is to help their members grow their businesses domestically and internationally by generating revenue and helping them save money. John explains that they have internationalised the industry through their trade missions and connections to international buyers - to the extent where 50% of the sectors revenues now comes from non UK commission or sales. He discusses that in comparison to 20 years ago what was previously seen as a cottage industry, is now a highly diversified, entrepreneurial and very successful commercial sector with global reach and buyers.

John explains that one of the ways that Pact helps its members is by providing support on business affairs, talent agreements, copyright issues and collective licensees. Additionally, it provides advice on to how to protect copyright or how to comply with UK employment legislation. Pact "are the AA service for producers, when they break down have a problem, we try and get back on the road and help them through whatever their issue is". All of the support and tools available is easily accessible to producers through a membership fee.

Another vertical within Pact is their international work, helping get their talented producers out to international markets so they can make sales or win commissions. “The balance has actually moved from sales or finished programmes to more original production. That’s actually the biggest part of non-UK revenues now”. John adds that the pandemic and subsequent uptake in video calls has massively accelerated the reach into international buyers, increased opportunities and also commissions.

Another core element of Pact’s work is their policy and regulatory work across the creative industries, to lobby governments and their work on European legislation. John explains that he helped to get the first sector deal done, which was the formal recognition by UK government that the creative industries were a part of the UK economy. Additionally, he also helped on the restart scheme last year which was the government indemnity scheme to replace production insurance for COVID. John discusses how it is important for Pact to give a voice to issues that matter to its members. 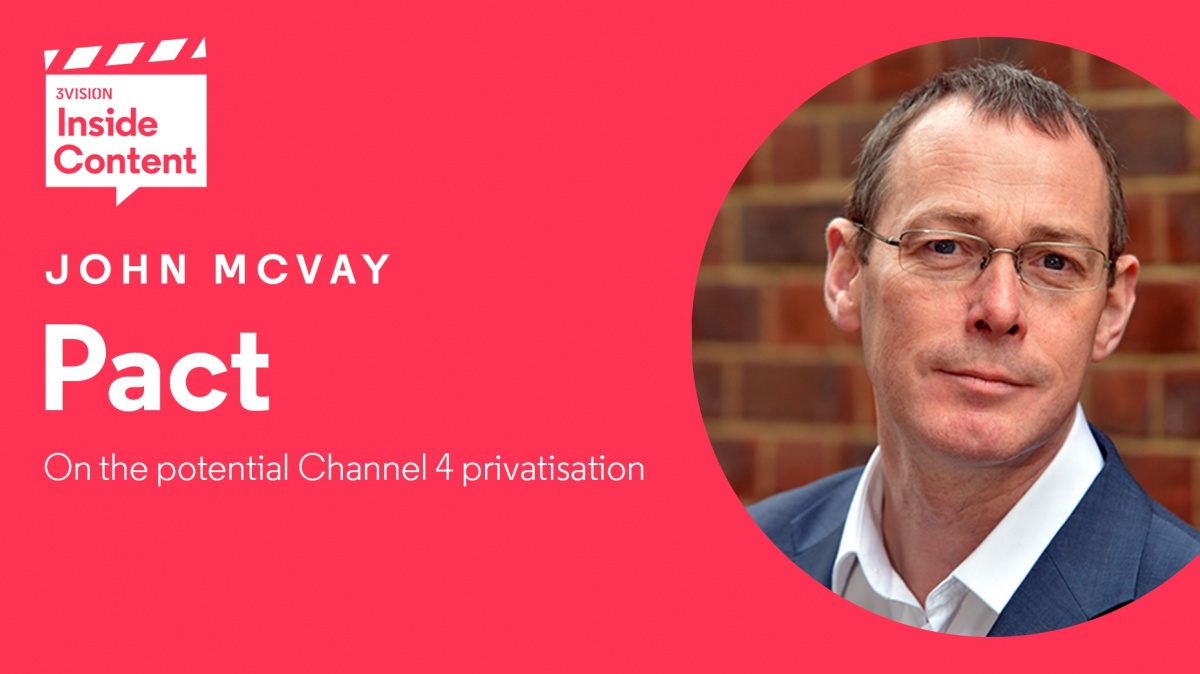 Pact’s accelerator programme brings opportunities, insights and expertise to their members and John believes is one of the biggest pieces of added value that they provide. Small businesses can then use this expert insight to construct their own business plan and strategy. Recently they have developed a lot of workshops on diversity and inclusion to help members navigate that area, as more buyers are wanting to see more diverse programming and ideas. John explains that helping their members save and make money is what drives them each day and to ensure that they are paying them back in their investment in Pact.

One of the highlights of the episode was discussing the potential privatisation of Channel 4 and the detrimental impact this would have on the creative landscape. As an independent broadcaster it is indisputable that Channel 4 in its current form is vitally important to the independent production sector. “The big impact if Channel 4 is sold, will be on the fact that whoever buys it will set up in house production. They will immediately look at the schedule and cancel all the shows over time, which do not give them a commercial return on investment”. John adds that at the moment this is not an issue, as they are not there to pay shareholders. The biggest impact of the privatisation on the indies sector, will be those who make a two part or three parter series, their slot will be cancelled by the new owners because they will want to free up airtime, investment and IP for their own in-house production. He adds that the consequence of the privatisation on the independent sector, will mean some people’s businesses will fail or they won’t grow as fast or they just won’t happen.

John explains that Channel 4 and its remit is one of the few broadcasters where if you don’t have a lot of experience in television you still might get commissioned by them. That isn’t the case with the BBC, where you have to have previously made a programme for the BBC in order to be able to pitch. “Channel 4 is not only an actual economic benefit to companies, it’s an aspiration pool for new businesses as well and all of that would disappear”. John explains that they have quantified the cost directly on what would be the impact on the in-house production on the schedule and over 10 years it’s close to 4 Billion pounds of a transfer of a value from independent producers to whoever the new shareholder is. "This means people will not grow, it means we will not get the same diversity of suppliers across the UK and including culturally and we think that’s a detriment”. He adds that the idea that an American buyer of Channel 4 will have a direct transfer of value from British businesses to American shareholders is deeply disturbing.

Other topics discussed include the evolution of the independent production sector and the importance of IP.

[7:49] What support and services does Pact’s provide?

[16:07] The evolution of the independent production sector and the importance of IP

[19:44] The impact of the potential Channel 4 privatisation

On 'Inside Content' the TV industry podcast, Banijay Rights discuss the changes in TV distribution